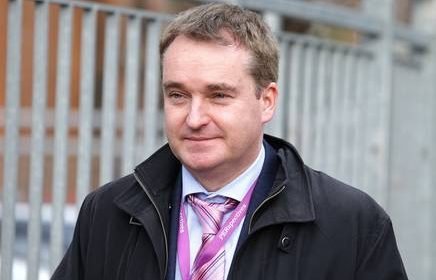 PUBLIC Expenditure boss Robert Watt has predicted that people will consider the costs of the National Children’s Hospital (NCH) to be “money well spent”.

Mr Watt made the remarks as he appeared before the Oireachtas Finance Committee meeting to be grilled on the project which has seen construction costs spiral by €450m to €1.4bn.

He was challenged by Sinn Féin TD Pearse Doherty on whether the hospital represented value for money.

Mr Watt said that nobody’s happy with the conditions in the existing Children’s Hospitals and that’s why everyone supports the building a new facility.

He said” obvious the cost is  higher than we would have hoped” and that the government had to make a judgement call to proceed.

But he said nobody could put a value on the NCH.

He added: “am I convinced everyone here will be very happy we have this new facility built? I think they will, yes.”

Mr Doherty said everyone wants the best facility but disputed the suggestion that a value couldn’t be put on it adding “this is one of the central roles of your department”.

Mr Watt said: “I think over time people will conclude when this hospital is built – even though it will be very expensive – future generations will say yes this was money well spent and it’s providing world class facilities for our citizens.”

Mr Watt was also quizzed on the NCH issue at the Public Accounts Committee earlier today.

During that, the Dail’s spending watchdog heard a claim that Mr Watt referred to its members as “a mob”.

It came as members of the PAC hit out at the failure of Paul Quinn, a senior civil servant who sits on the development board of the National Children’s Hospital, to appear before them to answer questions on the spiralling costs.

Mr Cullinane said: “That’s outrageous, if that is the case.”

He added: “If that was said it’s completely unacceptable that before an accounting officer even comes before the Public Accounts Committee and on foot of reasonable and genuine criticisms that have been put forward by members of this committee.

He added: “We’ll put it to Mr Watt when he comes in that he referred to members of this committee as a mob.”

Mr Cullinane challenged Mr Watt on the issue, saying that if the remarks were made it would be “deeply unsatisfactory”.

Mr Watt replied: “I don’t know what I said. If I said anything that offended anybody, apologies for that – if I did say it – I don’t recall saying it to be honest.

“If I did say it it was a colloquial expression. It’s not in any way to be demeaning of anybody.”

Mr Cullinane said: “That sounds like you did say it Mr Watt.”

Mr Watt said: “I don’t actually recollect to be honest… If anybody takes offence to what I said chair, apologies.”

Mr Watt said: “If I said something to offend the committee of course chair I apologise but it’s not meant to be an offensive remark”.

Earlier, members of the Dáil’s spending watchdog hit out at the government’s chief procurement officer Paul Quinn, who was asked to attend today’s meeting of the PAC but he is not among the officials that have been brought by Mr Watt.

Mr Quinn sits on the board of the National Paediatric Hospital Development Board (NPHDB).

Questions have been raised about his involvement in the NCH and why he didn’t tell DPER and minister Paschal Donohoe about the escalating costs.

DPER has previously defended him saying he is on the board in a “personal capacity”.

He also criticised Mr Watt’s opening statement which ran to 18 pages discussing major capital projects but does not mention the NCH where costs have risen €450m to €1.4bn.

Mr Cullinane said he is “deeply disappointed” Mr Quinn did not attend. He said TDs prepared to ask him questions and “he should be here”.

Fianna Fáil TD Marc MacSharry agreed with Mr Cullinane and claimed that there’s a view in the civil service that the PAC are “pesky politicians” who have the effrontery to ask how public money is spent.

Social Democrats TD Catherine Murphy said she had requested Mr Quinn’s attendance and said it was entirely in the PAC’s remit to ask questions of him. She said the NCH controversy showed “failures of process”.

She said it would have been “enormously helpful” for Mr Quinn to answer questions given his dual role on the hospital board and the Office of Government Procurement.

Labour’s Alan Kelly said Mr Quinn’s non-attendance was bizarre given that he’s on the NPHDB and the PAC can’t ask him questions.

Chairman Seán Fleming said that it was up to Mr Watt which officials he brought with him to the PAC but he was also dissatisfied at the situation. He suggested Mr Quinn should be asked to attend at a future meeting along with other members of the NPDB.