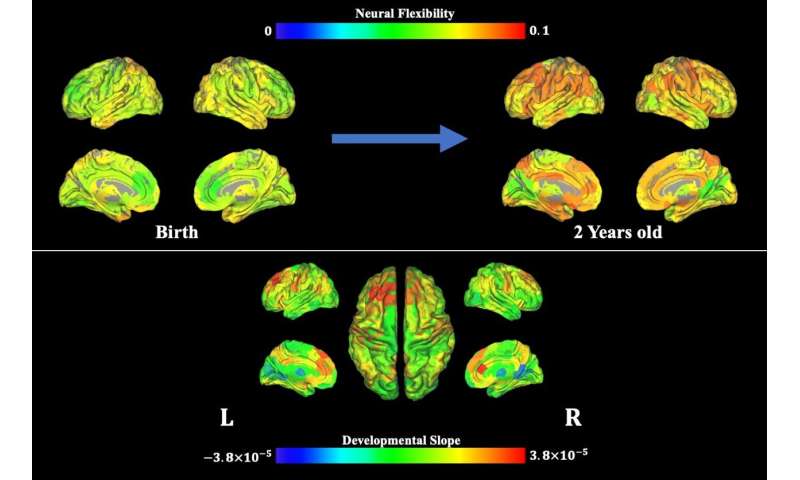 Cognitive flexibility refers to the ability to readily switch between mental processes in response to external stimuli and different task demands. For example, when our brains are processing one task, an external stimulus is present, requiring us to switch our mental processes to attend to this external stimulus. This ability of switching from one to another mental task is the cognitive flexibility. Such flexibility can predict reading ability, academic success, resilience to stress, creativity, and lower risk of various neurological and psychiatric disorders. To shed light on the development of this critical cognitive process during early infancy, researchers at the UNC Biomedical Research Imaging Center (BRIC) at the UNC School of Medicine conducted a brain imaging study in infants to examine the emergence of neural flexibility, which refers to the frequency with which a brain region changes its role (or allegiance to one functional network to another). Neural flexibility is thought to underlie cognitive flexibility.

For this study, the authors used magnetic resonance imaging to examine brain activity up to seven times in 52 typically developing infants under the age of two during natural sleep. The researchers, led by Weili Lin, Ph.D., director of BRIC, the Dixie Lee Boney Soo Distinguished Professor of Neurological Medicine, and Vice Chair of Basic Research in the UNC Department of Radiology, found that neural flexibility increased with age across the whole brain, and specifically in brain regions that control movement, potentially enabling infants to learn new motor skills. Neural flexibility also increased with age in brain regions involved in higher-level cognitive processes, such as attention, memory, and response inhibition, indicating continuing development of these functional networks as babies become toddlers.

“Neural flexibility in these brain regions may reflect early developmental processes that support the later emergence of cognitive flexibility,” Lin said. “What we’ve imaged, in essence, is the brain’s flexibility setting the stage for later maturity of higher cognitive brain functions.”

Additional analysis of brain regions with especially high neural flexibility revealed the presence of relatively weak and unstable connections from these regions to other parts of the brain, potentially showing how these regions can rapidly switch their allegiances between different functional networks. By contrast, neural flexibility in brain regions involved in visual functions remained relatively low throughout the first two years of life, suggesting that these regions had already matured.

Lower levels of neural flexibility (i.e., greater established brain maturity) of visual brain regions at three and 18 months of age were associated with better performance on cognitive and behavioral assessments at the age of five or six years.