S.T.D. Rates Are Falling, Data Show. That May Not Be Good News.

For the first time in years, rates of chlamydia, gonorrhea and syphilis, which had been on track in 2020 to hit record highs in the United States, have taken an abrupt downturn.

This should be good news. The coronavirus pandemic has certainly kept more people away from bars, night clubs and large parties, reducing opportunities for unsafe sex, studies show.

But the drop is more likely a harbinger of bad news, experts in reproductive and sexual health believe. They say the pandemic has seriously hindered efforts to mitigate sexually transmitted infections that can lead to pelvic inflammatory disease, chronic pain, infertility and even blindness and death in newborns. Rather than showing sexually transmitted diseases are on the run, the upbeat numbers likely signal instead that they are now going largely undetected.

In communities across the country, contact tracers for gonorrhea and syphilis, which had already been severely understaffed, have been diverted to Covid-19 cases. Eighty percent of sexual health screening clinics reported having to reduce hours or shut down altogether sometime during the pandemic, according to a survey by the National Coalition of STD Directors. In New York City only one of eight facilities was open this spring; now just three are open, which are steadily busy, because they are more of a safety net service than ever, said Dr. Julia A. Schillinger, an assistant commissioner at the New York City health department.

Doctors also believe that many patients who might otherwise seek treatment for S.T.D. symptoms have been avoiding the clinics for fear of being exposed to Covid-19.

And in some regions, essential supplies to test for S.T.D.s are running low because manufacturers of swabs, tubes and reagents are redirecting their products for use in coronavirus tests. As a result, there is a growing shortage of tests for the diseases.

“Our most effective tool for control is timely diagnosis and treatment,” said Dr. Gail Bolan, director of the Division of S.T.D. Prevention at the Centers for Disease Control and Prevention. ‘We’re very concerned that we’ll have continued, unchecked and sustained increases now if people can’t access screening now.”

In short, desperate efforts to contain one pandemic could well inflame the spread of another. The C.D.C.’s preliminary 2019 figures, the sixth consecutive record year, indicate 1.76 million cases of chlamydia and 602,000 of gonorrhea. Cases of newborn syphilis alone increased 22 percent from 2018.

Alarmed, officials at the C.D.C. issued alerts throughout the summer to clinicians nationwide. In its latest letter last month, the agency recommended that priorities for screening and testing should go to patients with symptoms, women who are under 25 or pregnant, and people at high risk for S.T.D.s, including those with H.I.V.

Patients with chlamydia or gonorrhea are often asymptomatic; only testing, then, detects infection. But until the pandemic-related restrictions can be relaxed, the letter advised: “Routine screening visits should be deferred.” 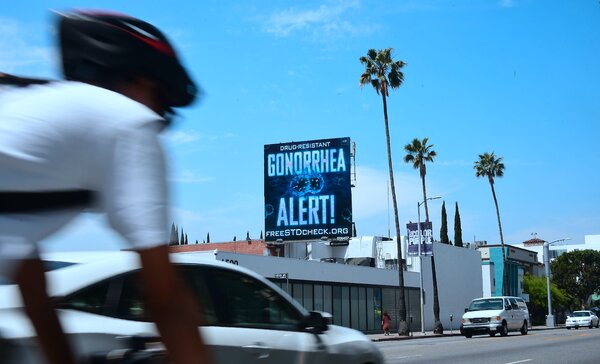 In the greater St. Louis area, only about 11 of 128 testing sites remained fully open this spring and summer, and in one health care system, testing dropped by 45 percent. Although many sites have begun to reopen, during one recent week, the St. Louis County Sexual Health Clinic had no urine test kits for gonorrhea and chlamydia, according to Dr. Hilary Reno, its medical director. Area hospitals had been on the hunt as well.

One reason that public health officials believe that the drop reflects test shortages and limited clinic access rather than less sexual activity is that the rates of decrease are more pronounced in gonorrhea and chlamydia, for which the test supplies have been affected, rather than in syphilis and H.I.V., which are detected through blood tests.

Dr. Bolan is also troubled by the breakdown in reporting of cases. “It’s not just data for the purpose of collecting it,” she said. “Surveillance is the backbone of public health. It’s how we allocate our resources. Without timely and accurate data, we feel like we have blindfolds on, while trying to figure out where our hot spots are.”

Doctors and nurses who work in clinics that serve mostly poor and minority patients say that the burden of the extreme service cutbacks and lack of testing falls most heavily on them. Those who work with teenagers said that many clinics that distribute free condoms have closed.

Dr. Joy Friedman directs adolescent medical services at the Einstein Medical Center, in a low-income neighborhood in Philadelphia. Teenagers tell her how difficult it is to discuss condom use with partners. Regular testing is the one way they have to protect themselves. And now, she said, “they need to know that testing won’t be available.”

Despite considerable efforts to reduce S.T.D.s, reported cases at the beginning of 2020 were higher than those during the same period in 2019, according to the C.D.C. But by early March, as the nation began complying with stay-at-home orders, those levels plummeted. In early April, weekly reports of chlamydia were 53 percent below 2019 numbers, with both gonorrhea and syphilis down 33 percent. Gonorrheahad been expected to hit an April monthly total of 54,127. But only 26,771 cases were reported.

As of mid-June, chlamydia numbers remained depressed but reporting of gonorrhea and syphilis had returned to expected rates. Given the limitations on testing and clinic closures, however, cases may well be higher.

“If sexual behavior rebounds while service interruption persists, we project an excess of hundreds of H.I.V. cases and thousands of S.T.I. cases,” researchers from Emory, Harvard and the University of North Carolina, Chapel Hill wrote in a preprint study of the sexual practices Atlanta men who had sex with men during the pandemic.

Social scientists are exploring how the coronavirus outbreaks have affected sexual behavior. Justin Lehmiller, a social psychologist at the Kinsey Institute, which has been issuing surveys during the pandemic to about 2,000 people, gay, straight and bisexual, said that even those in continuing relationships reported having less sex in the first months. “Higher levels of stress and anxiety are pushing down desire,” he said. “Singles have more challenges to hooking up.”

But when doctors and nurse practitioners who work with teenagers were asked if the pandemic had slowed down their patients’ sexual activity, they replied that, anecdotally speaking, not at all. Dr. Bolan said that one New York pediatrician reported that she’d treated many teenagers for S.T.D.s.