Rollout of Pfizer COVID-19 vaccine begins: What to know about the shot 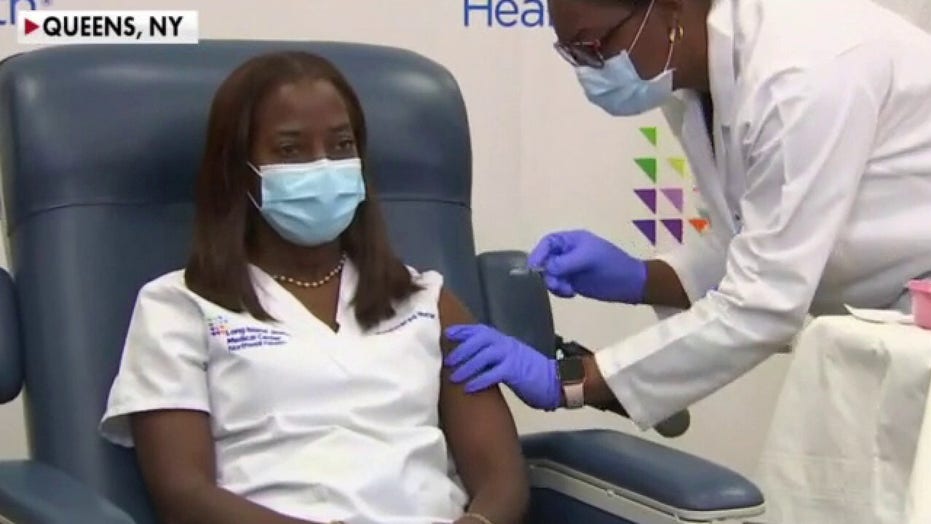 First COVID-19 vaccinations begin in US

The first shots of Pfizer and BioNTech’s coronavirus vaccine were administered on Monday, with the initial jabs of the country’s nearly 3 million doses going to health care workers in several states. More hospitals and pharmacies are expected to receive their shipments in the coming days, which will see thousands of health care workers and those who live in long-term care facilities receive their first doses.

The rollout comes just days after the FDA granted emergency use authorization to the vaccine, which is offered in a two-dose regimen spaced 21 days apart.

FDA officials granted the EUA after an advisory committee endorsed the vaccine, which has a reported efficacy of 95%. The committee was charged with voting on the following question:

“Based on the totality of scientific evidence available, do the benefits of the Pfizer-BioNTech COVID-19 vaccine outweigh its risk for use in individuals 16 years of age and older?”

The committee voted 17-4 in favor of the vaccine, with one member abstaining. However, several committee members took issue with the aspect of approving the vaccine for use in 16 and 17-year-olds due to limited evidence, while others argued that adolescents wouldn’t be among the first to receive the vaccine, allowing ample time for more research.

Under the EUA, the vaccine is now approved for use in individuals aged 16 years and older via intramuscular injection. In an FDA fact sheet on the vaccine, the regulatory agency said that it should not be given to individuals with a known history of a severe allergic reaction to any component of the vaccine.

The directive comes after two health care workers in the U.K. suffered an allergic reaction after receiving their first shots. Top health officials have said that the reactions were an effect of mass inoculation efforts.

Dr. Anthony Fauci, the nation’s leading infectious disease expert, called the events “likely a rare and unusual effect,” but said that if you have a history of allergic reactions, you may want to prepare for such an instance if you receive the vaccine.

The FDA has also noted that “available data on Pfizer-BioNTech COVID-19 Vaccine administered to pregnant women are insufficient to inform vaccine-associated risks in pregnancy.” The same applies to children younger than 16.

The vaccine was developed using messenger RNA (mRNA) platform, which injects the genes from the coronavirus “spike proteins” into health cells in order to induce an immune response. The vaccine must be kept at extremely cold temperatures and is being shipped in cartons housed inside thermal containers with dry ice. The vials must be kept between -80 degrees C and -60 degrees C and protected from light until ready to use.

Vials that have been thawed for use cannot be refrozen. As of noon Monday, the shipments had reached 55 out of 145 destinations.