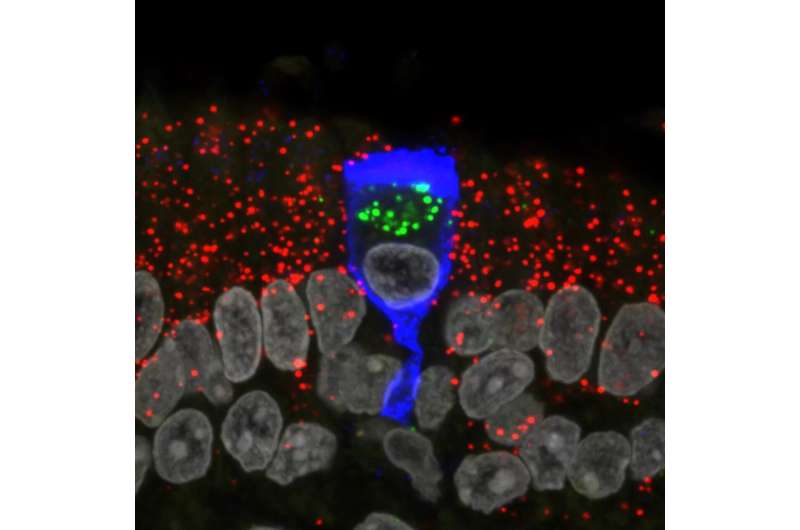 It is now widely known that COVID-19 is associated with the transient or long-term loss of olfaction (the sense of smell) but the mechanisms remain obscure. An unresolved question is whether the olfactory nerve can provide SARS-CoV-2 with a route of entry to the brain. Scientists at the Max Planck Research Unit for Neurogenetics in Frankfurt, in collaboration with physicians and scientists at the University Hospitals Leuven (Leuven, Belgium) and a major hospital in Bruges, Belgium, together with scientists at NanoString Technologies Inc. in Seattle, U.S., report that SARS-CoV-2 does not appear to infect the sensory neurons of the olfactory epithelium in COVID-19 patients. Moreover, the team failed to find evidence for infection of olfactory bulb neurons. Instead, the sustentacular cells, also known as supporting cells, are the main target cell type for the virus in the olfactory epithelium. Since SARS-CoV2 spares olfactory sensory neurons and olfactory bulb neurons, it does not appear to be a neurotropic virus.

As the olfactory mucosa is hidden deep within the nasal cavity, tissue sample procurement is not a practical option in patients while they are suffering from COVID-19. Hence, the physicians developed a novel protocol for harvesting tissue samples from deceased COVID-19 patients. As a control, tissue samples were taken from patients who had died from other causes and who were not infected with SARS-CoV-2 at the time of death. The workflow started with the notification of a team of ear, nose, & throat physicians about the death of a COVID-19 patient in an intensive care unit or ward. Using an endoscope, the physicians collected samples from the respiratory and olfactory mucosae and both olfactory bulbs. They were able to do so within 60 to 90 minutes after the death of the patient. “Thanks to this short postmortem interval, the tissue samples were in pristine condition for molecular biology studies,” says Laura Van Gerven, an ear, nose, & throat surgeon in Leuven and co-principal investigator of the project called ANOSMIC-19.

The team of scientists in Frankfurt was led by Mona Khan. They used specially designed probes to stain sections of the tissue samples and analyze them under a confocal microscope. The ultrasensitive analytical method, also known as RNAscope, makes it possible to visualize various types of RNA molecules of SARS-CoV-2 within single cells. The scientists were able to assign the infected cells to specific cell types by simultaneously visualizing, in distinct colors, RNA molecules that are characteristic of various cell types, in combination with classical cell staining methods using antibodies. “Our results show that SARS-CoV-2 infects sustentacular cells in the olfactory epithelium of COVID-19 patients and replicates vigorously within these cells,” says Peter Mombaerts, director of the Max Planck Research Unit for Neurogenetics.

Applying a novel approach of whole-transcriptome analysis using Digital Spatial Profiler from NanoString Technologies Inc., analysis of sections of the olfactory mucosa of a COVID-19 patient revealed that infection of sustentacular cells does not alter the expression of olfactory receptor genes in nearby olfactory sensory neurons.

Viral RNA in the leptomeninges

Viral RNA could not be detected in olfactory bulb neurons either. Interestingly, in a third of cases, the researchers detected viral RNA in the meninges surrounding the olfactory bulb, the so-called leptomeninges. In these anatomical locations, the viral RNA may not be present in cells that had been infected with the virus but may stem from virus particles that may have entered the leptomeninges by hitchhiking on the olfactory nerve or via the blood stream. Alternatively, the viral RNA in the leptomeninges may simply represent viral RNA molecules that were floating around in the blood and not packaged in viral particles.