Rare mosquito-borne viruses found to be widespread in Florida Everglades 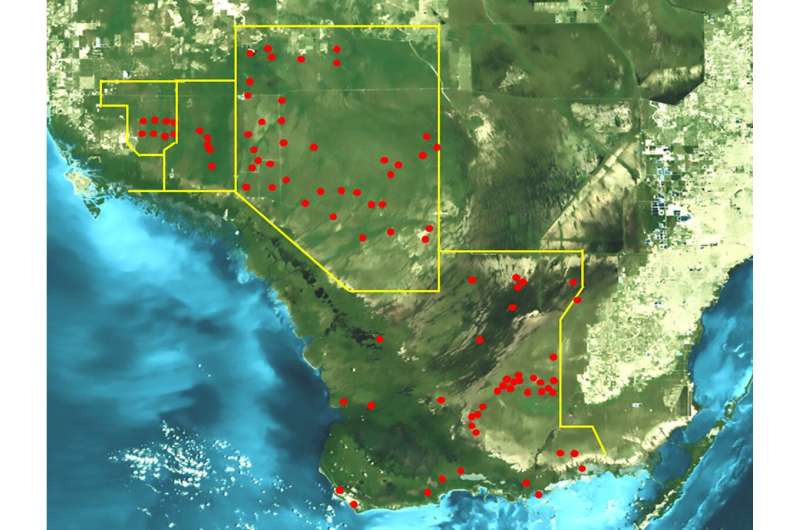 A team of research scientists led by the Yale School of Public Health has detected the presence of little-known mosquito-borne viruses endemic to the Florida Everglades throughout the wetland preserve, raising concern about future public health threats.

In four large nature areas encompassing over one million acres in the Everglades, the team conducted a two-year study of mosquitoes and the viruses they carry. The study revealed that several rare viruses are prevalent within the mosquito populations and were found in a third of 105 study sites.

The viruses—including Everglades virus, Mahogany Hammock virus, Shark River virus, and Gumbo Limbo virus, among others—were first discovered more than 50 years ago in the Florida preserve but have received little attention since.

The public health significance of these viruses is largely unknown, but impending environmental changes in the Everglades could result in an increased abundance of virus-infected mosquitoes and, potentially, increased exposure to humans, researchers say. The study found that the viruses were most prevalent in years when the water level was high, indicating that wetland restoration efforts and sea-level rise could result in more infected mosquitoes in the future.

The study is published in the online journal PLOS ONE.

“The presence of these viruses is something that needs to be studied so we know what it means for public health,” said lead author Durland Fish, emeritus professor at the Yale School of Public Health.

The study, which is the first systematic review of mosquitoes in the Everglades and the viruses they carry, provides important baseline information for the anticipated environmental changes in the region, which include wetland restoration, climate change, proliferation of invasive species, and residential development. Additional studies are needed to detect an increase in virus activity that could pose a public health threat in the future, Fish said.

There are more than 500 known mosquito-borne viruses and at least 100 can cause disease in humans. Most originate from wildlife that infect mosquitoes which then transmit the virus to humans through their bites. Mosquitoes and their viruses are part of natural ecosystems, and as more development encroaches on natural lands, more people will be exposed to these viruses, Fish said.

More than 7 billion mosquitoes are estimated to exist in the Everglades. In the study, researchers identified particular landscape features where virus-infected mosquitoes are most likely to be found, including cypress swamp, hardwood forest, pineland, and mangrove. They also identified the few mosquito species that carry viruses among the 30 species found in the study. This information will be important in directing future research efforts to understand how these viruses are maintained in one of the largest wetland ecosystems in the United States, Fish said.