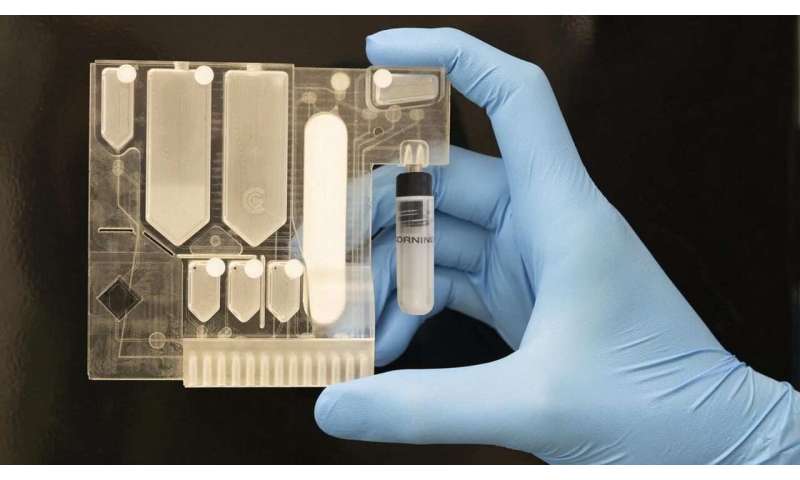 GeneCapture has licensed a molecular binding technology from UAH and the company’s CAPTURE PLATFORM is on track for commercialization within two years. The GeneCapture team has briefed the Food and Drug Administration (FDA) on its approach and has begun to prepare for the clinical testing required for FDA clearance. It is in discussions with industry leaders for various applications in health care rapid infection detection.

“We made history today—this is the first time an automated rapid pathogen identification has been reported directly from the RNA of the sample, with no modification or amplification of its genetic source, in about an hour,” says GeneCapture CEO and local entrepreneur Peggy Sammon. “We envision a future where finding out why you are sick can be solved almost anywhere, in an hour, and without being chained to a lab.”

The company’s unique disposable cartridge and portable reader platform enables rapid, inexpensive multi-pathogen detection at the point of care. Whether the illness is bacterial, viral, fungal or protozoan, a single test that’s estimated to cost around $20 will pinpoint the cause.

The novel technology consolidates sample prep and molecular signature detection in one plastic cartridge with a one-button portable reader.

The initial molecular binding concept was conceived by researchers at UAH and licensed exclusively to GeneCapture. The co-inventors on the original patent included Dr. Krishnan Chittur, professor emeritus in the Department of Chemical and Materials Engineering; Dr. Joseph Ng, professor in the Biological Sciences Department; Dr. Mark Pusey, UAH adjunct professor; and Jeff Dowell, who at the time was a student in UAH’s graduate program in Biotechnology Science and Engineering. In 2016, GeneCapture was awarded $100,000 in Alabama Launchpad’s inaugural LEAP Alumni Competition for local start-ups.

The partnership with GeneCapture is an example of a truly groundbreaking technology developed at UAH and being made available for the benefit of all, says Kannan Grant, director of UAH’s Office of Technology Commercialization.

“I would term this as a disruptive technology and not merely an incremental improvement to the current state of the science,” Grant says.

“UAH research has been at the cutting edge of technology development,” he says. “UAH has always shown responsible stewardship so the fruits of taxpayer-funded research are being made available for public consumption at the earliest possible time.”

A UAH spinoff, GeneCapture is an associate company at the HudsonAlpha Institute for Biotechnology, one of the world’s leading gene sequencing centers.

Since its founding, the company has filed an additional 11 patents, automated the process in a cartridge, built prototypes and performed successful pre-clinical validation tests. In addition to the commercial applications, the company has been awarded multiple Department of Defense contracts to mature the technology for potential military operational use.

GeneCapture’s CAPTURE PLATFORM has a closed cartridge that accepts a direct sample of urine, blood or a sample from a swab and then concentrates and exposes the pathogen’s RNA fragments to custom DNA probes on an array. Once the RNA is captured, the specific probes activate an optical sensor. The pattern across the array identifies the pathogen. Limits of detection have been validated and are currently clinically relevant for most bacterial infections. They are now being optimized for low-load viral infections.

“Just as the shift from relying on central computers to desktop and handheld devices enabled entirely new markets, so will decentralized, portable multi-pathogen infection detection enable new point of care markets,” she says.

A rapid diagnostic solution will fill a critical need, says Dr. Louise O’Keefe, Ph.D., the director of UAH’s Faculty and Staff Clinic and an advisor to GeneCapture.