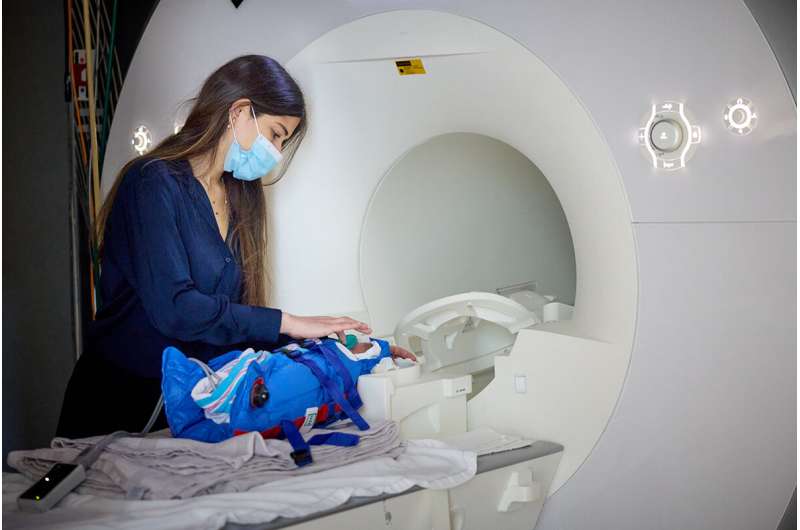 Poverty and crime can have devastating effects on a child’s health. But a new study from researchers at Washington University School of Medicine in St. Louis suggests that some environmental factors influence the structure and function of young brains even before babies make their entrances into the world.

A study published online April 12 in the journal JAMA Network Open found that MRI scans performed on healthy newborns while they slept indicated that babies of mothers facing social disadvantages such as poverty tended to be born with smaller brains than babies whose mothers had higher household incomes.

MRI scans of full-term newborns born to mothers living in poverty revealed smaller volumes across the entire brain—including the cortical gray matter, subcortical gray matter and white matter—than found in the brains of babies whose mothers had higher household incomes. The brain scans, which were conducted only a few days to weeks after birth, also showed evidence of less folding of the brain among infants born to mothers living in poverty. Fewer and shallower folds typically signify brain immaturity. The healthy human brain folds as it grows and develops, providing the cerebral cortex with a larger functional surface area.

A second study of data from the same sample of 399 mothers and their babies—this one published online April 12 in the journal Biological Psychiatry—reports that pregnant mothers from neighborhoods with high crime rates gave birth to infants whose brains functioned differently during their first weeks of life than babies born to mothers living in safer neighborhoods. Functional MRI scans of babies whose mothers were exposed to crime displayed weaker connections between brain structures that process emotions and structures that help regulate and control those emotions. Maternal stress is believed to be one of the reasons for the weaker connections in the babies’ brains.

“These studies demonstrate that a mother’s experiences during pregnancy can have a major impact on her infant’s brain development,” said Christopher D. Smyser, MD, one of the principal investigators. “Like that old song about how the ‘knee bone is connected to the shin bone,’ there’s a saying about the brain that ‘areas that fire together wire together.’ We’re analyzing how brain regions develop and form early functional networks because how those structures develop and work together may have a major impact on long-term development and behavior.”

Babies in the study were born from 2017 through 2020, before the start of the COVID-19 pandemic. Smyser, a professor of neurology, of pediatrics and of radiology, said that to successfully scan newborns during the first few weeks of life, babies are fed when they arrive for scans because they tend to fall asleep after eating. They are then snuggly swaddled into blankets and a device that helps keep them comfortable and still. The brain scans take place while they sleep.

In the study involving the effects of poverty, the researchers focused on 280 mothers and their newborns. First author Regina L. Triplett, MD, a postdoctoral fellow in neurology, had expected to find that maternal poverty—referred to in the paper as social disadvantage—could affect the babies’ developing brains. But she also expected to see effects from psychosocial stress, which includes measures of adverse life experiences as well as measures of stress and depression.

“Social disadvantage affected the brain across many of its structures, but there were not significant effects that were related to psychosocial stress,” Triplett said. “Our concern is that as babies begin life with these smaller brain structures, their brains may not develop in as healthy a way as the brains of babies whose mothers lived in higher income households.”

In the second study, which implicated living in high-crime neighborhoods as a factor in weaker functional connections in the brains of newborns, first author Rebecca G. Brady, a graduate student in the university’s Medical Scientist Training Program, found that unlike the effects of poverty, the effects of exposure to crime were focused on particular areas of the babies’ brains.

“Instead of a brain-wide effect, living in a high-crime area during pregnancy seems to have more specific effects on the emotion-processing regions of babies’ brains,” Brady said. “We found that this weakening of the functional connections between emotion-processing structures in the babies’ brains was very robust when we controlled for other types of adversity, such as poverty. It appears that stresses linked to crime had more specific effects on brain function.”

Reducing poverty and lowering crime rates are well-established goals of public policy and public health. And the researchers believe protecting expectant mothers from crime and helping them out of poverty will do more than improve brain growth and connections in their babies. But if social programs that aim to help people reach their full potential are to succeed, the researchers said the policies must focus on assisting people even before they are born.