Pfizer’s pill is the latest COVID treatment to show promise. Here are more 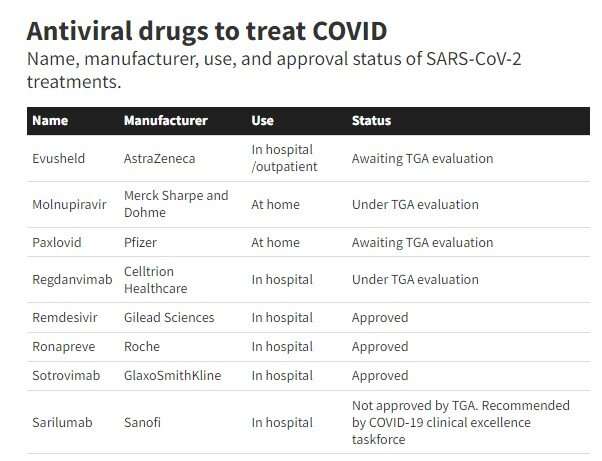 Pfizer says its antiviral COVID treatment Paxlovid cuts the chance of ending up in hospital or dying by 89%.

What differentiates this from other medicines we have used since the start of the pandemic is it provides the opportunity for patients to be treated at home, with a combination of a capsule and a pill.

The phase 2/3 trial data on which those hospitalization rates are based have yet to be independently verified. Nor has the treatment been approved by any country for use outside a clinical trial.

Yet this development adds to our growing portfolio of potential options to directly target SARS-CoV-2, the virus that causes COVID-19, and to treat COVID symptoms.

Paxlovid is a combination of two different drugs—the HIV drug ritonavir (a capsule) and an experimental drug PF-07321332 (a pill).

Ritonavir protects the body from metabolizing PF-07321332. It acts by being broken down by the body first (known as a sacrificial chemical) to ensure enough PF-07321332 reaches the virus intact.

PF-07321332 is a so-called protease inhibitor (as is ritonavir). It blocks the action of a vital enzyme (protease) and stops SARS-CoV-2 from making copies of itself.

What did the trial show?

The trial included 1,219 “high risk” adults with COVID who were not in hospital. Each person had at least one characteristic or underlying medical condition associated with an increased risk of developing severe COVID. One group received the treatment, the other placebo.

The trial’s interim results showed a reduction in the risk of hospitalization or death by 89% in the Paxlovid group compared to placebo.

At day 28, there were no deaths reported in the Paxlovid group, compared with ten deaths in the placebo group. Side-effects were similar in both groups and were generally mild.

The company said the results were so promising it was recommended no new patients needed to be enrolled into the study. And the company was recommended to submit the data to the US Food and Drug Administration for emergency use approval.

Before the drug could be used in Australia, the Therapeutic Goods Administration (TGA) would need to assess its efficacy and safety.

Just as importantly, the TGA would need to decide who may prescribe it and under what conditions. This may include whether it would be available from GPs, and what sort of patient risk factors would be considered. 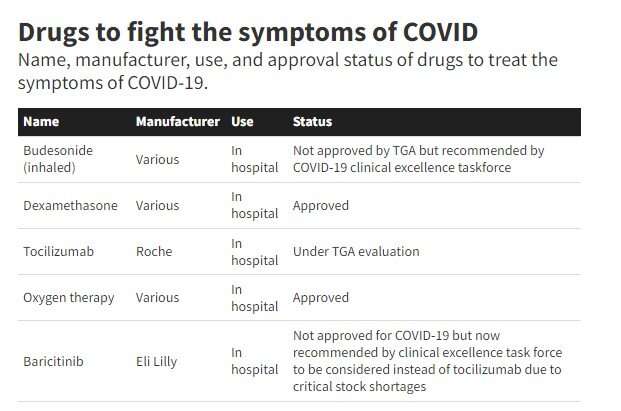 One of several potential antiviral drugs

Paxlovid is one potential COVID drug for use at home. The idea is these could be prescribed at the first sign of infection to prevent serious illness and death. People would manage their own symptoms, monitored while at home, and only be transferred to hospital if their condition deteriorates.

Merck has its own antiviral drug, molnupiravir, also for home use. It’s been approved for use in the UK, and is being considered for use in Australia.

Then there’s AstraZeneca’s emerging COVID drug Evusheld. The TGA has just given this “provisional determination,” meaning the company can now submit data for evaluation.

Evusheld contains two long-acting monoclonal antibody drugs—tixagevimab and cilgavimab. It’s an injection that could be given in hospital or as an outpatient to prevent infections from getting worse.

Human trials have shown when Evusheld was used before exposure to COVID, there were significantly fewer symptoms.

Although Evusheld may potentially be used to prevent COVID, it would not be a substitute for vaccination. But it could provide additional protection for people who may have an inadequate response to vaccination or who cannot be immunized.

We also have a range of existing and emerging treatments for use in hospital to treat the symptoms of infection—inflammation on the lungs and difficulty breathing.

If patients with mild COVID have certain risk factors for disease progression, such as diabetes or a heart condition, doctors may consider using hospital administered treatments such as sotrovimab, Ronapreve, or inhaled budesonide to prevent disease progression.

According to Pfizer’s trial results, Paxlovid could be used as an alternative to in-hospital treatment for preventing disease progression in patients with the same risk factors.

There are several steps before we can routinely expect to take COVID drugs at home to prevent the worst of the symptoms. We need independent verification of these drugs’ efficacy and safety, and of course, regulatory approval.

Then there’s the issue of cost.

Developing new medicines, particularly at the pace required because of COVID, means these new drugs aren’t cheap. One consideration for state and federal governments will be balancing the costs of the medicines against health outcomes.

The daily cost of a patient in hospital is around A$5,000 for an uncomplicated (non-COVID) admission. This is much more than the reported cost of a full course of molnupiravir to the US government at US$700 (about A$960).