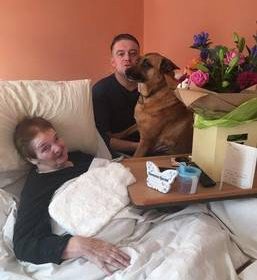 A grieving son has revealed how the body of his dead mother was left in a busy hospital A&E for hours because there was no other room for her.

Mr Crowley, who was a full time carer for his mother for the last fourteen years after her diagnosis with multiple sclerosis, said she became unwell at home and was taken by ambulance to the A&E unit.

She was on a corridor for two hours before being taken to the A&E where staff frantically started tests, he told the Neil Prendeville show on Cork’s RedFM.

It was discovered later than she had sepsis and she underwent treatment.

“I was with her and went home for a shower around 4pm but at 7pm. I got a call from the hospital to come in.”

He described his shock as a senior nurse and doctor told him his mother had tragically passed away.

They said: “I am so sorry your mother has passed away.”

The following hours were extremely distressful as A&E staff could not find a room in which to place his mother’s deceased body.

“She was placed behind one of the curtains in a triage room where patients are taken for bandaging.

“People kept coming in and out looking for things and people.”

He described how another patient nearby was changing ringtones on his phone unaware the body of late mother was nearby.

“A priest came in to say a prayer but five people must have been in and out during that time looking for things.”

He recalled: “The noise of the place was awful.”

They eventually got a little room but space was so tight that every time someone opened the door it banged the bed where his mother was lying.

“I remember that nurse and she was so sorry. She told me she to be reassured that my mother was not alone when she died. She held her hand.”

Mr Crowley said he was angry at the system, not to staff.

“I will never forgive the system for being like that. People deserve a service so much better.”

“I just had to step out. It was incredible.”

He spoke of how he misses his mother who was his “best friend”.

The harrowing experience comes in a week when the number of patients on trolleys reached a record with 679 people waiting for a bed.