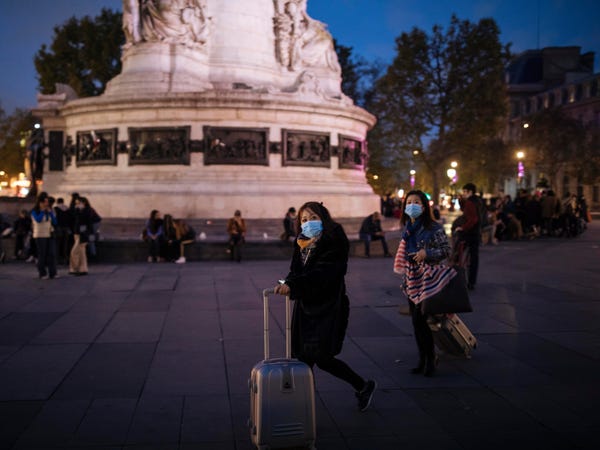 Thousands of Parisians were stuck in record levels of traffic as they escaped the city and headed to the countryside to make the best of the national lockdown imposed at midnight Thursday.

Traffic stretched to a cumulative 435 miles (706km) in the Île-de-France region of Paris early on Thursday evening, ITV reported.

Professor Michael E. Webber from the University of Texas tweeted a video of the traffic jam with the caption: "Incredible traffic jam in Paris as people try to leave the city before 9 pm curfew and before confinement begins at midnight.

"Traffic is barely moving in every direction as far as the eye can see. Lots of honking and frustrated drivers."

The chaos was worsened by families returning to the cities after the French school holidays and longer queues than usual also built up around the cities of Lyon and Bordeaux, according to the BBC.

The French must stay at home unless leaving home for essential work, medical reasons, buying essential goods, or undertaking their one-hour allocation of exercise.

They will also be required to carry documents that provide evidence and be subject to police checks and fined at €135 ($158) if they are not eligible to leave their homes.

In a televised address to the nation, President Emmanuel Macron said: "The virus is circulating at a speed that not even the most pessimistic forecasts has anticipated.

"We are all in the same position: overrun by a second wave which we know will be harder, more deadly than the first. I've decided that we need to return to the lockdown which halted the virus."

However, schools and creches will remain open with French Prime Minister Jean Castex announcing yesterday that schoolchildren aged six and up will now have to wear face masks rather than just children aged 11 and over, according to France 24.

The lockdown will be enforced until December 1, although the government's scientific adviser, Professor Jean-François Delfraissy, told France Inter Radio that it is likely to extend beyond this, France 24 added.

Initially, Macron announced a 9pm curfew in Paris and other major French cities but officials this week acknowledged that the measure had been insufficient in decreasing infection rates and required a more drastic response, Reuters reported.

The news comes as France enters its second full lockdown amid the growing rate of coronavirus cases with the country, reaching over a million on Thursday, according to the European Centre for Disease Prevention and Control (ECDC).