Overweight people have been slammed for allegedly snapping tree branches in a popular London park by swinging from them.

Wardens at Highbury Fields, in north London, say an increasing number of people are using branches to do pull-ups.

They are being encouraged by personal trainers who are increasingly choosing to train clients outdoors rather than in stuffy gyms.

But this change in trend is said to be taking a toll on the 30-acre park in Islington. 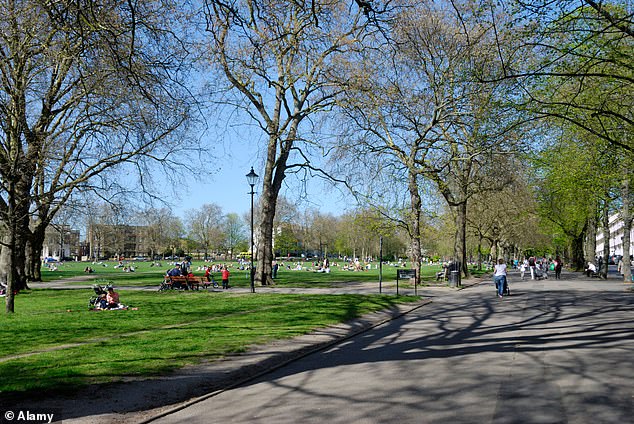 Fat people are damaging trees in Highbury Fields park in North London by swinging from them while exercising, wardens have claimed

Lawrence Coles, 51, a resident who lives near the park, told The Sun: ‘Some of the personal trainers couldn’t give a fig.

‘They jump up on to branches to do pull-ups and get their clients to do the same.

Highbury Fields Association and Highbury Community Association both want Islington Council, which is responsible for the park, to take action.

WHAT IS A PARKRUN?

Parkrun is a network of free, public exercise sessions which take place each Saturday across the UK and the world.

A team of local volunteers sets up a 5km (3.1mi) running course in their local area – usually in a park or green space – and members of the public can join for free and choose whether to run or walk the course.

There are more than 700 weekly events around the UK, and people who live in communities without one can set them up themselves with the support of the wider parkrun network.

Everyone from children to Olympians is encouraged to take part, and the runs are timed but not competitive.

To get involved people just need to register before they turn up.

Find out how to take part on the official website.

Gill Shepherd, the HCA’s ‘member for trees’, told The Sun: ‘We want to support everyone’s use of the park but they are damaging the trees.’

An Islington Council spokesman added that the authority could remove people from the park if they damaged trees or benches.

In August, experts at the University of Roehampton and a team in Germany found that keeping fit outdoors relieves stress more than working out indoors.

Mountain biking and running in landscapes without any buildings were found to have the biggest positive impact on mental health.

The NHS recommends adults get at least 75 minutes of vigorous exercise, such as running or swimming, every week.

And researchers at Victoria University in Melbourne found that a 50-minute jog once a week lowers the risk of early death by 27 per cent.

It was also linked to a 30 and 23 per cent lower risk of dying from heart disease and cancer, respectively.

Parkrun, which began in 2004, is a network of free, public exercise sessions which takes place every Saturday.

It sees joggers take part in 5-kilometre running events at hundreds of parks around he country and across the world.

HOW MUCH EXERCISE DO YOU NEED TO DO?

To stay healthy, adults aged 19 to 64 should try to be active daily and should do:

A good rule is that 1 minute of vigorous activity provides the same health benefits as 2 minutes of moderate activity.

One way to do your recommended 150 minutes of weekly physical activity is to do 30 minutes on 5 days every week.

All adults should also break up long periods of sitting with light activity.