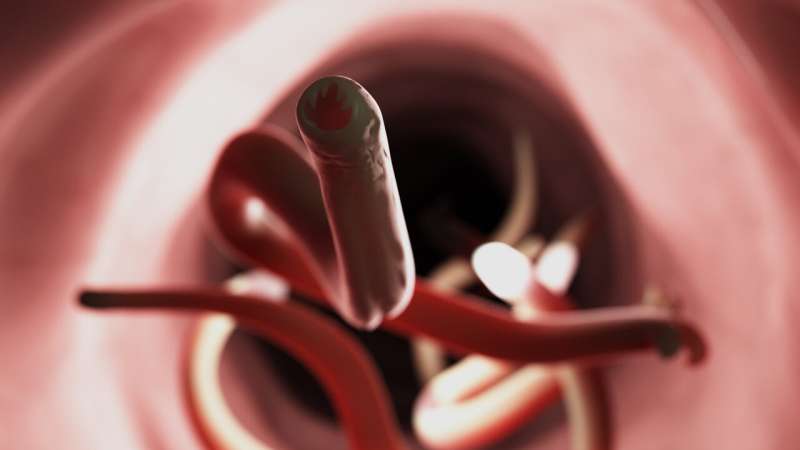 There’s been a significant breakthrough in the development of a vaccine to prevent hookworm infection—a parasite which causes serious disease in tens of millions of people globally.

Trials of the vaccine candidate in mice, led by researchers at The University of Queensland, indicate that it is more than twice as effective than existing alternatives and marks a leap forward in the battle against the highly contagious parasite.

Professor Istvan Toth from UQ’s School of Chemistry and Molecular Biology said the ease with which the vaccine could be administered –  via tablet, liquid or powder—would be a gamechanger for developing countries.

“Our vaccine candidate can be orally self-administered, bypassing the need for trained medical staff, and means there’s no requirement for special storage, enabling it to reach large, isolated populations,” Professor Toth said.

“Vaccination can be carried out at a significantly reduced cost, which not only improves the health of those affected and at high risk, but also helps improve economic growth in disease-endemic areas.”

Hookworm currently infects around half a billion people globally and lives within the human intestine, using the host’s blood as its source of nourishment, digested through a special set of enzymes.

It’s often found in regions with poor water quality, sanitation, and hygiene—greatly impacting on the physical and cognitive development of children and increasing the risk of mortality and miscarriage.

UQ’s trials in mice showed significant improvements on an alternative vaccine candidate which only achieved a 30 to 50 per cent reduction in the number of worms.

“The UQ-developed vaccine resulted in an impressive 94 per cent worm reduction in mice,” Professor Toth said.

“So not only is our new vaccine candidate easier to deliver, it triggers a staggeringly good immune response.”

“When the function of these enzymes is blocked, the parasite starves,” Dr. Skwarczynski said.

“Our vaccine produces antibodies against the hookworm enzymes responsible for the digestion of blood—they simply stop being able to eat properly.”

The researchers plan to continue working on and refining the vaccine candidate in preclinical development settings, to ensure its safety and efficacy, before beginning human clinical trials.

“We’re very optimistic that, along with our colleagues, led by Professor Alex Loukas from James Cook University, we will be able to deliver a successful vaccine that stops this parasite in its tracks,” Dr. Skwarczynski said.