Ontario health officials unveiled the latest COVID-19 modelling numbers on Thursday, which highlighted the province could be headed towards daily numbers upwards of 6,000 cases by mid-December.

The province currently has a seven-day growth rate of four per cent, however, the last three days, the per cent growth is six, according to Dr. Adalsteinn (Steini) Brown, Dean of the Dalla Lana School of Public Health at the University of Toronto.

If case growth does indeed hit five per cent, the documents say Ontario’s numbers would potentially exceed the numbers seen in multiple European countries who are currently in some level of lockdown, including France and the U.K.

Brown said more restrictions should be put in place in some of the hot spot areas in order to reduce cases and the impact on the health-care system. 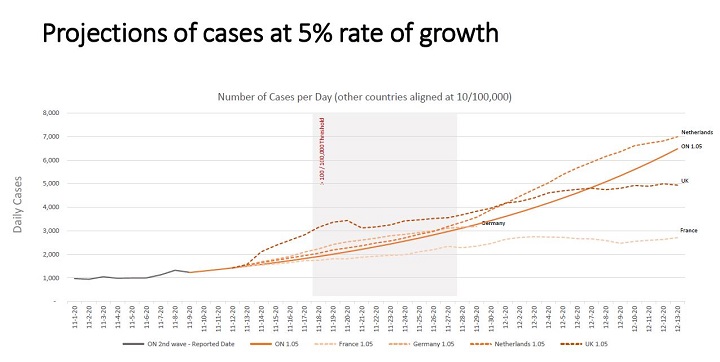 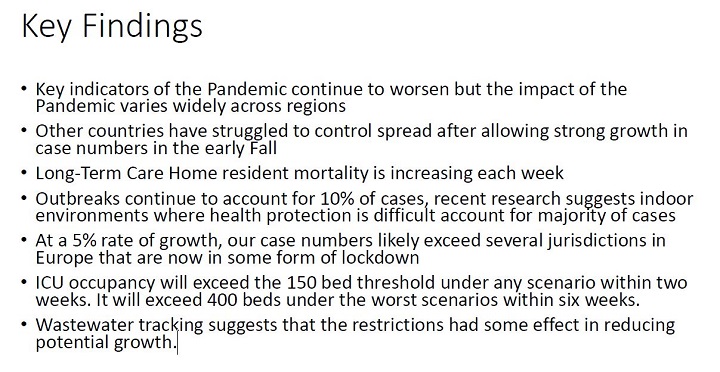 Also highlighted in the documents is the fact that intensive care units will exceed the 150-bed occupancy in Ontario regardless of any modelling scenarios within the next two weeks. It will exceed the 400-bed threshold in a worst-case scenario within six weeks.

The data shows there has been a 61 per cent increase in hospitalized COVID-19 patients over the past three weeks and a 167 per cent increase over six weeks. However, the average patient’s stay in the hospital due to COVID-19 has declined.

Overall, key findings in the modelling numbers suggests the pandemic continues to worsen but “the impact of the pandemic varies widely across regions.”

Last week, Ontario released a new colour-coded system that classifies regions depending on the presence of the virus.

The framework has been met with increased criticism, with municipal public health units adding more strict restrictions on regions with high numbers, including Toronto, which extended the closure of indoor fitness classes and indoor dining for another 28 days.

“Based on what we’re seeing in the models, if we continue on with the current level of restrictions, I would not expect to see any deviation from the current results, you’d continue to see growth,” said Brown.

“I don’t believe the levels will change without action,” he continued.

Ontario Health Minister Christine Elliott said 472 new cases were recorded in Toronto, 448 in Peel Region, 155 in York Region and 91 in Ottawa, 61 in Durham Region, 58 in Waterloo and 54 in Halton Region on Thursday.

All other public health units in Ontario reported under 50 new cases.