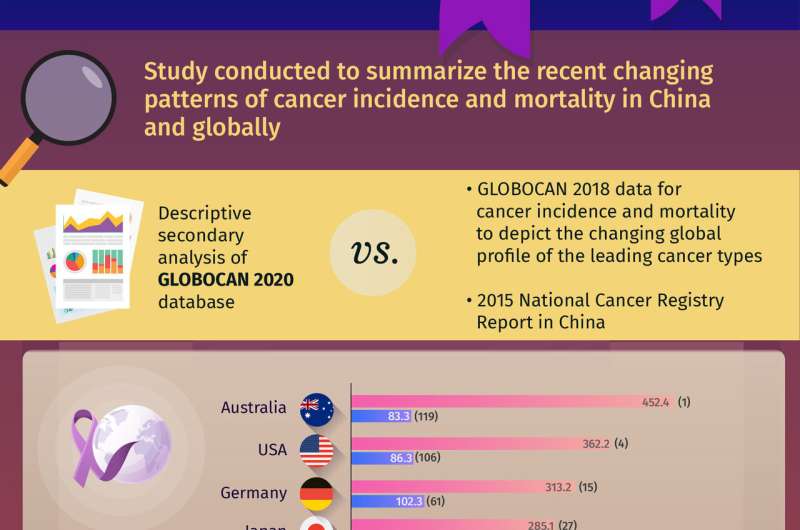 Cancer is one of the top causes of death worldwide. The cancer burden is related not only to genetic predisposition, but also to environmental pollution and socioeconomic factors such as lifestyle. Consequently, the burden of this disease is not uniform across all countries. In fact, the public health of China, a country known for the rapid change in its development status in the last few decades, has undergone a paradigm shift with respect to cancer incidence and mortality.

Their investigation into how the ranks of 14 leading types of cancer—based on the number of new cancer cases and deaths—changed globally revealed that in 2020, breast cancer surpassed lung cancer to become the most frequently diagnosed cancer. The reasons for this rise may include increasing obesity or changing reproductive practices. While lung, liver, stomach, breast, and colon cancers were found to be the top five leading causes of cancer-related death, interestingly, the cases of stomach cancer showed a notable reduction.

The comparative assessment of the cancer incidence and mortality of 185 countries revealed some intriguing facts about the unique cancer scenario of China. It highlighted that 24% of all newly diagnosed cases and 30% of the cancer-related deaths in the world were reported from China. The high incidence of cancer might be partially attributed to the vast population of the country. The country-wise assessment of the age-standardized incidence rate (ASIR) and age-standardized mortality rate (ASMR) further emphasized the severity of the cancer burden in China. Well above the global average, the high ASIR (204.8 per 100,000) and ASMR (129.4 per 100,000) of the country made it rank 65th and 13th in these categories, respectively. Strikingly, Japan and Korea, both China’s neighboring countries, had higher ASIRs but lower ASMRs than China.

Going by the current trend of the global cancer burden, the researchers depict a grim future as the incidence and mortality due to cancer will continue to increase over the next 20 years, with a relatively high magnitude in Asia. With an already high cancer mortality rate, along with a predicted 6.85 million new cancer cases and 5.07 million deaths in 2040, China is in urgent need of targeted intervention for cancer control.

However, Dr. Chen is hopeful that dissemination of knowledge on China’s cancer epidemiology would help to raise public awareness of cancer risk and promote a healthier lifestyle. He surmises, “An overview of the updated national cancer epidemiology will help renew our understanding of the recent cancer burden. Comprehensive strategies, including health education, dissemination of essential knowledge about cancer, advocating healthy lifestyles, effective screening, vaccination programs, and tobacco-control policies need to be customized to target China’s cancer burden.”