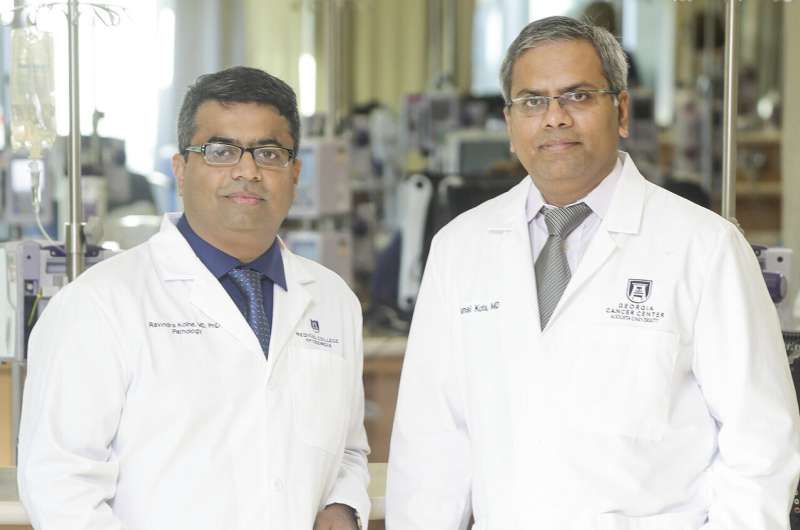 A gene panel that looks for about 10 times the number of cancer-causing genes as panels currently used to diagnose and fine tune treatment for a variety of cancers is effective at identifying problematic genes in the most common leukemia, investigators report.

The 523-gene panel, developed by San Diego-based biotech company Illumina, which includes all genes known to potentially cause cancer, can be readily adopted for use in clinical laboratories to diagnose acute myeloid leukemia, or AML, the investigators report in the journal PLOS ONE.

Identifying more genetic mutations in an individual’s cancer also enables more targeted treatment for that patient, they say. That includes finding mutations not previously associated with their cancer type, which opens the door to using drugs targeting those mutations that have traditionally been used against other cancers.

“Having a bigger panel gives us more targets,” says Dr. Ravindra Kolhe, vice chair for translational research in the Department of Pathology at the Medical College of Georgia at Augusta University.

“Part of what we found here is this 523-panel works for leukemia and that it’s a practical and clinically relevant tool for clinical laboratories for routine molecular profiling of blood cancer,” says Kolhe, the study’s corresponding author.

AML is a distinct disease in every patient because, as investigators are increasingly learning, the gene mutations involved may not be the same in any two patients, says Dr. Vamsi Kota, MCG hematologist/oncologist who directs the Bone Marrow and Stem Cell Transplant Program at the Georgia Cancer Center and AU Health.

“The term ‘leukemia’ is broad and we should not be treating everyone the same,” says Kota, a study coauthor. “That is one of the reasons you see the same treatment working for some and not working for others.”

The MCG investigators retrospectively analyzed 61 bone marrow samples, which included samples from 40 patients with confirmed leukemia and detailed clinical information on 27 of those patients.

The larger panel identified 880 variants in 292 genes, and only 14.8% of the variants were in genes included in the smaller 54-gene panel currently in use by many labs, they write. The remaining 749 variants are not typically assessed in a leukemia diagnosis or detected by the 54-gene panel, they note.

When they looked at the information available on those 749 variants in follow up, they found at least 14 of the variants in 10 genes likely could contribute to AML and 96.2% of the patients had at least one of the 14 novel variants. They also found 22 variants in five other genes associated with other tumor types in the vast majority of the patients with AML.

Novel variants identified in the patients might be significant in providing a more complete diagnosis and prognosis for patients and in better identifying treatment that more directly targets their cancer-associated mutations, they say.

There is often overlap in the mutations that contributes to different types of cancer and the broader assessment of mutations present should help identify those.

“The more we know, the more it expands our knowledge of leukemia and expands our ways to treat it,” Kota says. “If you find something abnormal in the genes, which is there in other cancers, then we can use those drugs in these patients,” Kolhe adds.

“The hope is by finding more of these mutations, we no longer call the cancer by a name but we call it— and treat it—by the mutations,” says Kota.

The Georgia Esoteric and Molecular Laboratory, which Kolhe directs, was the first in the nation to validate the 523-gene panel by comparing results to established but less comprehensive methods, like polymerase chain reaction used to amplify small segments of DNA to look for suspect changes. For this study, they also ran the same bone marrow samples multiple times on the 523-gene panel and found essentially 100% consistency each time. They also did individual tests looking for specific mutations identified by the panel, and those were consistently on par with the panel’s findings as well. They found the larger panel nearly 100% effective in clinical sensitivity, specificity, precision and accuracy.

“It’s a panel we can consistently do in a lab on a routine basis in a cost- effective way that increases our understanding of the gene mutations contributing to an individual patient’s cancer,” Kota says.

While noting their sample size was small, there were interesting clinical correlations, like finding seven mutations in a 23-year-old male who had been diagnosed with two mutations. The new mutations they found included two novel variants now associated with leukemia and other cancers, they say. The patient, who had the highest number of gene mutations identified by the larger panel, only survived four months and two days.

Kota notes that decades have passed without any real advancements in AML treatment, but this year six new drugs, which target six mutations identified by the smaller gene panels, have been approved. Kolhe hopes the new panel will help expand that new drug number at least 10 times as well.

“The idea of having a bigger panel is not only confirming what we already know about which mutations are associated with a cancer but identifying new ones,” Kolhe says.

“What we are doing is taking that 50-gene panel and going to the next level with a 523- gene panel and one of our goals includes identifying 60 new targets within the next five years,” Kolhe says.

Most patients with AML relapse within three years of diagnosis, and broader identification of treatment targets should improve those percentages, they say.

The National Comprehensive Cancer Network recommends that testing for AML include molecular analysis for at least those six genes now known to be causative for AML.

Current guidelines also suggest the use of the multi-gene panels and next-generation sequencing for a comprehensive prognostic assessment. Next generation sequencing is a high-throughput approach, like the 523-gene panel, that enables investigators to efficiently sequence a large number of genes at one time, even the entire genome in a day’s time. Sequencing means looking at the order of the four base pairs of DNA—A, T, C and G—to find changes that cause disease.

Kota and Kolhe say that while the smaller gene panels are cost and time efficient, they provide an incomplete mutational profile, including omissions of several known hotspot mutations. The increased understanding of the molecular heterogeneity of blood cancer, and other cancers as well, make the broader assessment logical, they say. They note that the cost of the broader panel is no higher than testing for the six AML- associated genes.