In a recent study published on the preprint server medRxiv*, researchers evaluate the safety and immunogenicity profiles of a high-dose quadrivalent influenza vaccine and a messenger ribonucleic acid (mRNA)-based coronavirus disease 2019 (COVID-19) vaccine that were administered concomitantly to older adults. The findings demonstrate that co-administration of two vaccines is safe, well-tolerated, and does not cause any immune interference.

The influenza virus is a seasonal respiratory virus that affects all age groups and can cause serious complications in older adults. Influenza infections in older adults aged 65 years and older are associated with excess mortality rates of 3 to 44 per 100,000 individuals. Besides respiratory complications, influenza infections can lead to aggravation of preexisting health conditions, functional disabilities, and cardiovascular complications.

The severe acute respiratory syndrome coronavirus 2 (SARS-CoV-2), the causative pathogen of COVID-19, is another type of respiratory virus that causes severe and often fatal infections in older adults, immunocompromised patients, and those with preexisting health conditions. However, the rapid development and rollout of several different COVID-19 vaccines have made it possible to control the viral spread and prevent disease severity.

Because of the prioritization of the COVID-19 vaccination campaign to control the pandemic, a significant reduction in the influenza vaccination rate has been observed in many countries. This may potentially increase influenza-related morbidity and mortality among older adults. To increase influenza vaccine uptake and reduce the burden on healthcare systems around the world, the World Health Organization (WHO) has recommended co-administration of influenza and COVID-19 vaccines.

In the current study, the scientists have evaluated the safety and immunogenicity profiles of a high-dose quadrivalent influenza vaccine concomitantly administered with the third booster dose of an mRNA-based COVID-19 vaccine mRNA-1273 in older adults aged 65 years and above.

The current study is an ongoing Phase II, multiple-center, open-level clinical study conducted in six regions throughout the United States. Older adults who had received the second dose of the mRNA-1273 vaccine at least five months prior were selected for the study. The participants were categorized into three groups, with one group receiving both influenza and mRNA-1273 vaccines concomitantly and the other two groups receiving either of the two vaccines.

The safety and tolerability of vaccines and antibodies developed against the respective vaccine antigens were assessed at baseline and at day 22 post-vaccination.

A total of 296 older adults aged 65 years and above were enrolled for the current study. Of the participants, 100 were co-administered with both vaccines, 92 received only the influenza vaccine, and 104 received only the mRNA-1273 vaccine. 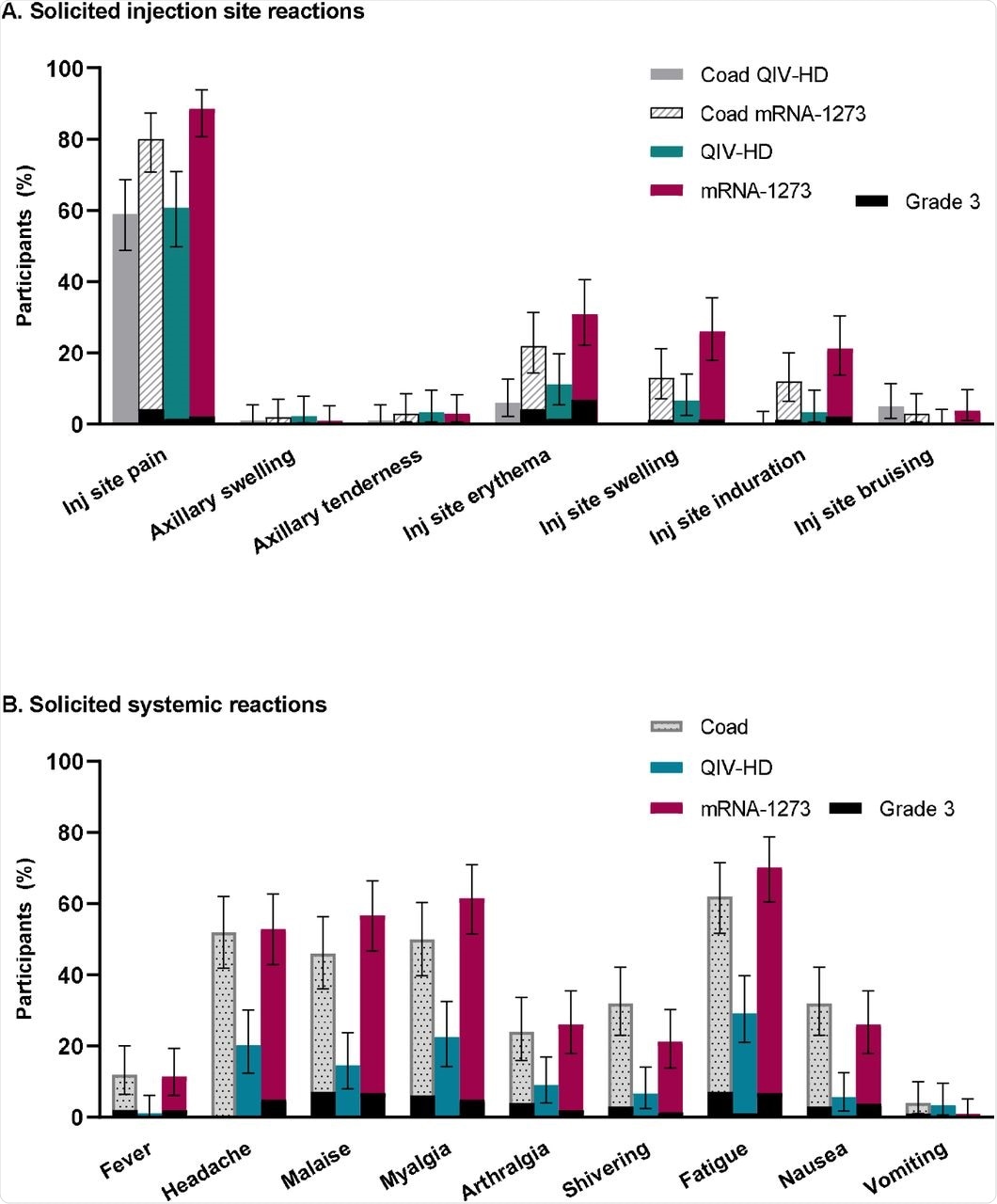 The high-dose quadrivalent influenza vaccine evaluated in the current study contains influenza A/H1N1, A/H3N2, B/Yamagata, and B/Victoria strains. On day 22 post-vaccination, the levels of antibodies against each influenza strain increased significantly compared to the baseline level. The antibody levels were comparable between the co-vaccination and influenza vaccination groups at day 22, indicating similar seroconversion rates between the two groups for each viral strain of the vaccine.

The levels of immunoglobulin G (IgG)-specific anti-SARS-CoV-2 spike binding antibodies increased significantly at day 22 post-vaccination compared to that at baseline. Notably, these antibody levels were comparable between the co-vaccination and mRNA-1273 only vaccination groups, indicating similar seroconversion rates.

The current study reveals that the influenza vaccine and mRNA-1273 vaccine can be co-administered in older adults without causing any severe side effects and immune interference. This can help to improve current influenza vaccination rates, shorten the vaccination period, and reduce the number of visits to healthcare providers.

medRxiv publishes preliminary scientific reports that are not peer-reviewed and, therefore, should not be regarded as conclusive, guide clinical practice/health-related behavior, or treated as established information