In Massachusetts, Inmates Will Be Among First to Get Vaccines

Tens of thousands of prison inmates in Massachusetts will be among the first to be offered coronavirus vaccines, before home health aides, seniors and medically vulnerable residents of the state.

The inmates, along with people who live in homeless shelters and other congregate settings, will be vaccinated by the end of February, after health care workers, emergency medical workers and residents of long-term care facilities receive the shots.

The state’s high prioritization of inmates is unusual. A dozen states have listed prisoners among those set to receive vaccines in the first round of inoculations, but none ranks inmates so highly. Federal health officials have recommended that corrections officers and staff at state facilities receive high priority but have said nothing about inmates. The federal prison system has said it will vaccinate officers and staff first.

(On Wednesday, researchers at seven universities urged the Centers for Disease Control and Prevention to prioritize the vaccination of people in prison and recommend that vaccines be administered to inmates at the same time that correctional officers and staff receive them.)

“This is all because there is limited supply,” said Jennifer Kates, senior vice president and director of global health and H.I.V. policy at the Kaiser Family Foundation. “Tough decisions have to be made.”

There are more than two million incarcerated people in the United States. An estimated 20 percent have been infected with the coronavirus. Inmates are four times more likely to be infected than the general population, and twice as likely to die of Covid-19.

While the stereotype of prisoners is that they are young, more than one in 10 nationwide is over age 55 and therefore more vulnerable to the virus, according to Lauren Brinkley-Rubinstein, co-founder of the Covid Prison Project, which tracks cases among incarcerated people nationwide.

Inmates also have higher rates of chronic medical conditions, like diabetes and hypertension, that increase the risk of severe disease if they become infected. Many suffer from mental illness.

Prison infections can lead to outbreaks in the community. One in seven infections in Chicago, for example, was linked to people going in and out of the Cook County Jail, according to a recent study in the journal Health Affairs. The jail is “one of the largest known nodes of SARS-CoV-2 spread in the United States,” the researchers said.

Yet there has been no comprehensive plan to roll out the vaccine for inmates. Even in those states prioritizing prisoners for early vaccination, details are often vague. Some states have simply decided that when older adults and medically vulnerable residents are vaccinated, inmates in those categories will be included — but not other prisoners.

The decision in Massachusetts to prioritize prisoners was driven by a commitment to equitable access amid a pandemic that has taken a disproportionate toll on people of color, who are also overrepresented behind bars, said Dr. Simone Wildes, an infectious disease specialist and a member of the state’s Covid-19 vaccine advisory group.

“We used equity as a core principle in our recommendations,” Dr. Wildes said. “We have had a lot of cases of Covid in the prisons, and we wanted to make sure those at highest risk were getting the vaccine first.”

Black and Hispanic people account for just over half of the prison and jail populations in Massachusetts, although they represent fewer than 20 percent of the state’s population, according to the Prison Policy Initiative, an advocacy organization.

Allocating scarce medical resources to people in prison can be controversial, and the Massachusetts advisory committee had some “very robust discussions,” Dr. Wildes said. But criticism so far has been muted.

“Those at greatest need — we have to take care of them,” Dr. Wildes said. “You can’t socially distance in prison.” 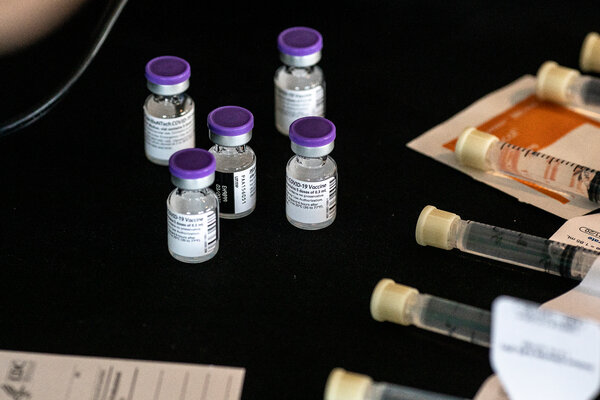 Nearly 4,000 infections have already been reported among inmates and corrections officers in Massachusetts, and the number of incarcerated people testing positive has been steadily increasing since November.