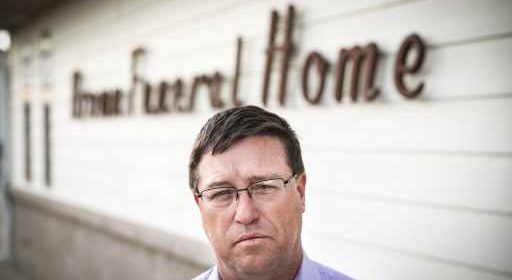 EADS – Here in Kiowa County, farmers have always relied on whatever moisture happens to fall from the sky rather than on irrigation. In August, this 1,300-person community bordering on Kansas was the first part of Colorado where drought conditions surpassed “extreme” to a level meteorologists call “exceptional.”

“It’s horrible, just horrible, the ways drought can affect the human mind,” says Jimmy Brown, a third-generation farmer in Eads whose wheat and grain sorghum crops withered this year, just like those of his neighbors. “I doubt there’s a person here whose mental health hasn’t been affected by it.”

The Eastern Plains have had dry spells. Some old-timers remember Dust Bowl conditions in the 1930s. Their children weathered extreme drought in the mid-1950s, and their children’s children endured acute dryness in 2002 and 2012.

Yet nobody here can remember a year so parched that even the bindweed stopped growing.

Even before smoke from the late-summer mountain wildfires wafted in, Brown says “You couldn’t see the sun here because of all the dirt blowing.”

“You can smell the dirt. You can feel it in your nose and sinuses. You can see how everything’s so brown, so dead all around you. You can feel how it’s all so depressing,” he says.

Brown, in addition to farming, serves as Kiowa County’s elected coroner and lone funeral director. With drought, he says, comes uncertainty, even among the majority of growers who carry insurance compensating them for the losses. With uncertainty come powerlessness, irritability and dread.

“People tend to be shorter with one another, to withdraw,” he says, noting that he is no exception.

He had a hard time this year mustering the energy to feed and water his cattle, check his fences and tend to the endless other tasks required to run a farm. He followed headlines about Kansas farming communities 200 miles east producing their best crop yields ever, pondering the fickleness of drought.

“You come to doubt if it’s ever going to rain again. You know it will, but you don’t know when. So you ask yourself what am I doing here? Why are we doing this? And what exactly is the point in it all?” Brown says.

Growers speak of a rootedness – financial, family, and spiritual – needed to withstand a year as dry as this, let alone several of them. They do not speak of mental health factors. Especially in a county where data show residents’ discomfort talking about personal problems is 11% higher than the statewide average, they cannot know what challenges were faced by the local father whose 16-year-old son discovered his body after his recent suicide. Or by the four men with ties to Kiowa County who ended their lives two years ago – three of them within two weeks of each other, and two of them farmers.

That string of suicides prompted the local mental health services provider to offer classes on recognizing signs of mental health crisis. It held special training for loan officers, machinery dealers, auctioneers and bankruptcy clerks to spot signs of potential suicidality in their clients and urge them to seek professional help.

Dawn Beck is a physician’s assistant at the Eads Rural Health Clinic and Kiowa County Hospital. Her patients bristle at words like anxiety and depression. If the land is sick, so will be the people who work it, and there’s nothing to be done but wait it out, she says they tell her.

“They say ‘Well, we’ve been through this before,’ even though this is by far the worst year anybody can remember. It’s a pride thing. A cowboy thing. And it’s just eating people up.”

“We talk about the things we understand – interest rates, commodity prices, land values, weed control, farming techniques,” says Brown, 52. That’s how we operate around here. It’s our culture. And whether it’s right, wrong or indifferent, it’s not going to change.”

Susan Greene can be reached at [email protected]