Someone once told me that there’s a warp and a weft to life and when something like a cancer diagnosis comes in, the fabric of your life changes pattern forever.

You don’t know what you would have been without it, you don’t want it – but sometimes it can bring amazing things.

When my husband, Tim, was diagnosed with stage 4 bowel cancer in 2015, he was determined to make the most of the time he had left.

Prior to the diagnosis, Tim had been unusually tired for a year or so, which, on reflection, was anaemia due to the cancer. We had put it down to him running his own business and having a young family – he’d never been great at getting up in the mornings.

In 2014, he was 40-odd, feeling a bit lardy – not that he was! – and began a diet that cut wheat and potatoes out. He became a fierce convert, did lots of exercise, and lost quite a lot of weight. It was cruel that on one hand Tim felt fitter than ever, while on the other his efforts had masked what was found to be a large tumour in his bowel.

Tim had had other symptoms for a while; but in a stereotypical ‘man’ way, he didn’t tell me. I later discovered Tim had been having blood in his stools but had put off seeing the GP.

‘I wanted to check our life insurance policy first,’ he’d told me, heartbreakingly.

That was Tim all over – thinking of me and the kids before himself.

Molly and William, our children, were just 10 and six when Tim was diagnosed. One of the hardest things was working out whether to tell them, and how. Several people advised that honesty is the best way forward with kids. They can sense when things are wrong.

It’s so hard to tell your kids that you have a life-threatening disease because the truthful answer to nearly all their questions is ‘I don’t know’.

William’s small voice asking ‘will you die, Daddy?’ left Tim unable to talk, and I stepped in, explaining what the doctors would try to do. Then, the silence was broken with a cheerful, ‘what’s for dinner, Mummy?’

The thing that made Tim saddest was the fact he would be leaving our children. He couldn’t bear the thought that William wouldn’t really remember him. But they will never forget what a brilliant, dedicated dad he was – Molly and William have strong memories of him.

Tim focused on what treatments were available – as well as making the most of time with me and the kids. He was quickly sent for surgery to remove the tumour, and, once he recovered, he began chemotherapy.

Unfortunately, it only worked for a little while, so he had to have a further operation called HIPEC – where cancerous tumours are surgically removed, and then heated chemotherapy drugs are applied directly inside the abdomen to eliminate the remaining cancerous cells – but even this wasn’t enough to completely free him of cancer.

There weren’t any more traditional treatment options available but Tim made it his mission to learn about new ones. He and his oncologist at the Royal Marsden, looked at various newly trialled treatments, and decided on a triple therapy combination.

It worked so well for nine months or so that Tim was classified ‘NED’, which meant he had no evidence of disease in his body. He used that time to train on his bike. He even completed the Dartmoor Demon race with his friends – 90km of Devonian steep hills – raising over £270,000 for the Institute of Cancer Research (ICR). 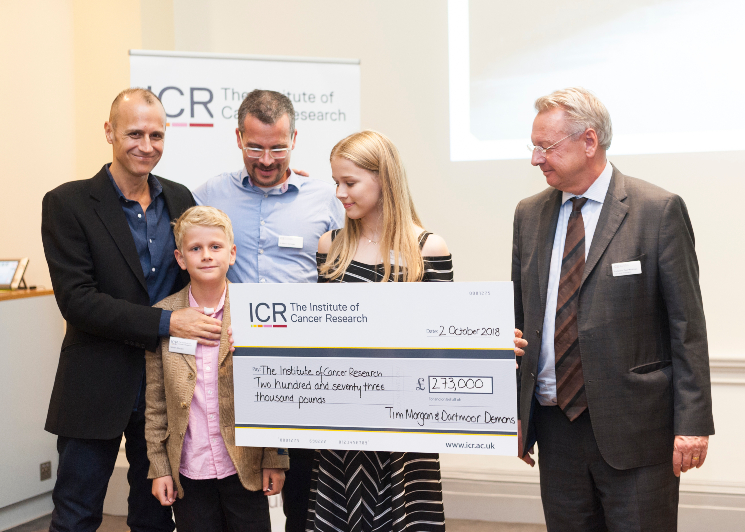 Despite the gruelling treatments, what really sticks with me about the whole experience is that our house was always a place of laughter and energy. There were countless times where we would sit around the kitchen table, and Tim would have the kids in hysterics with one of his stories. He was an amazing mimic, and could do accents brilliantly.

He had a great sense of humour, and rhythm – once he stopped working he joined a local covers band called Crisis (as in, mid-life…) and they did pub gigs.

Tim and I met through mutual friends at university, but we were properly introduced on a singles table at a friend’s birthday party on 1 May 1997 – the landslide Labour election night.

Things nearly didn’t work out as my dad ‘forgot’ to pass on the message that Tim had called me on the family landline twice! Thankfully, he forgave me for making him wait and we went on to marry in 2002.

One memory that will always stay with me is Tim’s 45th birthday in September 2016.

Two weeks before, I’d asked Tim if he wanted a party, and who to invite. The answer was ‘Yes, everyone’! So I blitzed it: it was like planning a wedding. I hired a marquee, a brass band, caterers, and almost 150 people came.

And Tim had a surprise of his own planned.

As the event was in full swing, Tim beckoned me to the front and, suddenly, his best man from our wedding appeared to ‘officiate’ a renewal of our wedding vows in front of all our favourite people in the world. It was such a moving moment.

Happy and intensely sad all at the same time. Sad because the cancer had come back.

He’d had an MRI in August, and there were multiple sites of activity. Tim was fortunate enough to be accepted onto a trial in Barcelona for immunotherapy – a type of cancer treatment that helps your immune system fight cancer.

Keen to try anything, and have an adventure, we decided to move to Spain for a few weeks at the beginning of his treatment, then he’d fly back and forth. We lived in a flat in downtown Barcelona, it was a gorgeous autumn, and we took the kids out of school for some of it so we could be together.

Once Tim’s treatment became a weekly appointment, he had different family and friends accompany him out there for the night – they’d go for dinner and nice walks around his treatment. Those were actually some amazing times which, if you look at it positively, cancer gifted to Tim.

That drug worked like a miracle on Tim, and kept him alive and strong for 14 months. But eventually his cancer developed resistance and Tim had to leave the trial. His cancer had seeded through his abdomen, and it wasn’t responding any more.

That was an incredibly tough time. Sometimes it was Tim who had to comfort me through the worst moment, when I just wanted to be strong for him. We told the kids and, I think as Tim’s illness spanned nearly five years, they just assumed that their dad would come through, because that was what he did.

With no new options left, Tim and his oncologist decided to give chemotherapy one more go. It was a brutal thing to put himself through – he was exhausted, and his body weakened with each cycle. Eventually, there was no more that could be done except manage palliative care at home.

Tim found that hard to accept. He was such a fighter. For the first three years as someone with cancer, he was fit and strong. He used to go to the hospital in Spain, have his treatment, then go for a run up in the hills. The nurses all thought he was crazy, but he was proving that he was alive.

That’s one of the most important lessons that this journey has taught me – we are all alive every day of our existence until we’re not. You could walk across the street and get knocked over by a bus but you’re living until that moment, and it’s the same with a chronic or a terminal disease.

Tim did not want to be defined by cancer. At each stage of the process Tim fought and, although the final year was tough, I feel lucky we had the positive years preceding it.

Sadly, Tim died in November 2019, aged 48. We held a huge funeral in his memory with over 300 people – there was music and prayer, hugs, tears and laughter. Looking back now, I feel almost guilty about it, given how many people were denied the opportunity to grieve fully during the pandemic.

You may find it odd but I am thankful for everything that Tim’s years of treatment brought our family. That’s why I continue supporting the Institute of Cancer Research because, in 10 years’ time, I want there to be even more options available to people like Tim.

The loss we have felt since he died as a family has been immense but as a three we are doing well. Molly, now 16, and William, now 12, have struggled between the grief and the lockdowns, but those have still been interspersed with laughter and singing.

With kids you have to be resilient and Tim’s legacy is that he never quit, so nor can we.

He would be proud that his story may be giving other families the same opportunities to make memories because, in the end, that’s all that matters.

Metro.co.uk’s weekly The Truth Is… series seeks to explore anything and everything when it comes to life’s unspoken truths and long-held secrets. Contributors will challenge popular misconceptions on a topic close to their hearts, confess to a deeply personal secret, or reveal their wisdom from experience – good and bad – when it comes to romance or family relationships.