‘I don’t want to believe I have an incurable brain disease, but I know I have’ – former RTE presenter Kieron Wood 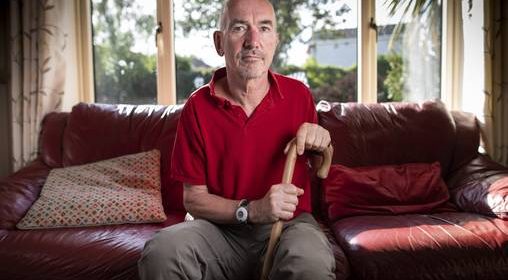 Comedian Dudley Moore, actor Bob Hoskins, newspaper columnist Nigel Dempster and singer Peter Sarstedt (Where do you go to, my lovely) died from it. And now I have it. Progressive supranuclear palsy (PSP), that is.

I’m a man aged 70, so I’m part of the most common target group; many more men than women get PSP, and they tend to be older. There’s no known cure and, as the population ages, it’ll become more common.

My maternal grandfather died in 1968 from what was then thought to be Alzheimer’s disease, though there’s no evidence, so far, that PSP is inherited.

I’m also suffering from corticobasal degeneration (CBD) and primary progressive aphasia, which means I forget what I was going to say.

It all started about three years ago with problems playing the piano and typing. I didn’t forget all my words then.

That’s due to the damage to my brain. The left side of the brain (where the speech area sits in right-handed people) controls the right side of the body, and vice-versa.

I went originally to consultant psychiatrist Dr Abbie Lane in Dundrum with alleged depression. She, cleverly, spotted that I held my right arm oddly, and referred me to a neurological clinic suffering from ‘bradykinesia’, a form of slowness of movement (which can also include depression).

Professor Tim Lynch, the State’s leading expert on movement disorders and so-called ‘tauopathies’ (the involvement of tau proteins), said at the end of July: “If I had to say it’s anything, I’d say it’s PSP.”

PSP is a form of Parkinsonism, related to Parkinson’s disease (which Pope St John Paul II died of), but without the tremor.

Research has shown that the signs and symptoms experienced in PSP and CBD are due to abnormalities in tau protein.

The MAPT gene is responsible for making tau. If the MAPT gene mutates, changes can occur that result in abnormal clumping of tau proteins within the neurons.

But as yet no definitive cause has been found — though Prof Lynch says he sees a disproportionate number of farmers suffering from the disease. So maybe the cause is environmental.

PSP is caused by the progressive death of nerve cells in the brain, leading to difficulty with balance, vision, speech and swallowing. It’s called PSP because it’s progressive, it damages parts of the brain above the pea-sized nuclei that control eye movements and it results in palsy or weakness.

PSP does not affect everybody in the same way and at the same speed, which is why it’s so personal.

Early symptoms may include loss of balance and unexpected falls (usually backwards — I spent several days in an NHS hospital following such a fall) and eye problems. The difficulties can include looking up and down (where the eyes seem to go ‘round the houses’, instead of smoothly going down and up) and sensitivity to light. Some people can experience depression, dyspraxia or cramped handwriting. (My writing has really slowed down — I can no longer advise on family law in the Free Legal Advice Centres.)

My voice is occasionally quiet (which I shout to make up for), and speech and swallow problems can develop as the condition progresses. Falls gradually become more frequent.

PSP is difficult to diagnose because of the complexity of the disease. Early on, symptoms may mimic those of other neuro-degenerative diseases, such as Parkinson’s disease or Alzheimer’s.

On referral to the Mater hospital, clinical assessment involves psychological and neurological tests, including a lumbar puncture (the cerebro-spinal fluid has to be sent to the UK for a result), several MRIs and a PET scan. My phosphorylated tau levels were increased.

There is no effective treatment for PSP, so managing symptoms is key to controlling the progress of the disease.

While PSP is not life-threatening in itself, swallowing difficulties increases the risk of choking and aspiration pneumonia. (Hopefully, I’ll be ga-ga by then.)

Regular exercise — physical and mental — is vital. It is also important to see a neurologist with experience of PSP and CBD to get a definitive diagnosis, though Ireland has a marked shortage of neurologists.

The HSE community services can help. Among other things, I had a second set of banisters fitted in my home to prevent falls on the stairs. There’s also a group which supports people with PSP, the PSP Association, based in North Brunswick Street, Dublin 7. It also organises events and monthly meetings.

The brain changes in PSP and CBD are similar, but not the same.

CBD is a degenerative brain disease, affecting people from the age of 40 onwards. It often starts with progressive numbness and loss of the use of one hand or leg.

Other symptoms include ‘alien limb’ syndrome. Everyday tasks such as putting your socks on, tying shoelaces, using the remote control or even personal hygiene issues become increasingly difficult — like PSP.

Gradually, the condition spreads to the other side of the body. Eye issues are normally less debilitating than in PSP.

Conclusive identification of PSP is often only available after death. Brain donation — by those suffering from PSP and those not suffering from the illness — is essential to help find a cure. In Ireland, we have the Dublin Brain Bank at Beaumont Hospital, which accepts all brains (and has its own website). Most of the donors are sufferers from neuro-degenerative diseases or their spouses.

I don’t want to believe I have an incurable disease, but I know I have. I think: ‘Why me?’

Some days I feel worse than others and don’t want to get out of bed, but my wife (and carer) Catherine says: “Take one day at a time. You can walk and talk now, so appreciate that.”

That’s true — but I don’t look forward to the day when I can’t write any more, and may be suffering from dementia and unable to swallow.

For the time being, all I can do is what

Nigel Dempster did in his video on YouTube — pray.