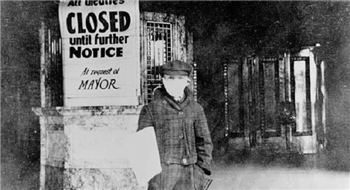 In Toronto, the order to close all theatres, moving pictures shows, pool halls and other public gathering places came on Saturday, October 19, 1918.

That fall, Toronto was hit hard by a devastating and previously unknown form of influenza which struck Canada and the rest of the world. This was the Spanish Flu and it killed approximately 55,000 Canadians.

The flu came in three waves, including the Spring of 1918 but it was this second wave which would prove most deadly.

A newspaper clip quoting the then Medical Officer of Health, Charles Hastings:

“The epidemic struck Toronto almost like a cyclone, assuming epidemic proportions on or about Oct. 9 and continued until Nov. 2 when it subsided almost as rapidly as it began.”

Toronto Historian Bruce Bell said the population of Metropolitan Toronto in 1918 would have been just under one million people.

“Downtown would have looked (like) what it looks like today. The streets were empty … We had other diseases before here in the city – back in the 1840s we had Typhoid, Cholera but this was different,” said Bell.

Another thing that was different was the fact that the Spanish Flu was killing healthy, younger adults between the ages of 20 to 40 but by the spring of 1920, the flu ended.

“It was the very beginnings of talking about building a subway system here and also – the rise of the skyscraper. Toronto in the 1920s was a thank you to the city for what they had gone through,” he continued.