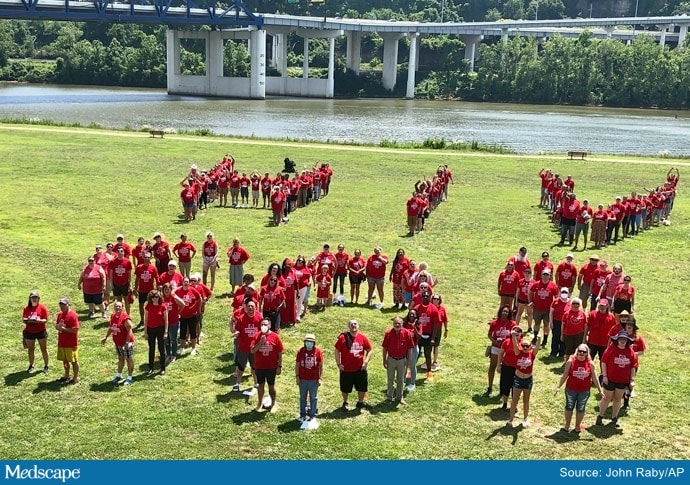 Dozens of people form the phrase “HIV SOS” in Charleston, W.Va. Activists are calling on the city of Charleston to declare a public health emergency for new HIV cases and prescription drug overdoses.

CHARLESTON, W.Va. (AP) — Dozens of volunteers formed the letters “HIV SOS” at a health event Saturday as activists seek a public health emergency declaration in a city with one of the nation’s highest spikes of such cases.

After volunteers wearing red T-shirts formed the plea for help along the Kanawha River near downtown Charleston, Joe Solomon, co-founder of the nonprofit group Solutions Oriented Addiction Response, called on the City Council and Mayor Amy Shuler Goodwin to act on the HIV crisis and overdoses from prescription pain pills.

“In Charleston and Kanawha County, there’s a family butchered by the overdose crisis every other day,” Solomon said. “All we’re asking is for (them) to take one day to declare a public health emergency. We need to treat this like the emergency that it is.”

Earlier this year, Dr. Demetre Daskalakis, the CDC’s chief of HIV prevention at the Centers for Disease Control and Prevention, called Kanawha County’s outbreak “the most concerning in the United States.” He warned it could take years to address the surge and that the case count possibly “represents the tip of the iceberg.”

Republican Gov. Jim Justice in April signed a bill to introduce more stringent requirements to needle exchange programs like those offered by Solomon’s group. The move came over the objections of critics who said it would restrict access to clean needles amid the spike in HIV cases.

The bill requires licenses for syringe collection and distribution programs. Operators would have to offer an array of health outreach services, including overdose prevention education and substance abuse treatment program referrals. Participants also must show an identification card to get a syringe.

Advocates view the regulations as onerous.