In Florida, less than one-quarter of delivered coronavirus vaccines have been used, even as older people sat in lawn chairs all night waiting for their shots. In Puerto Rico, last week’s vaccine shipments did not arrive until the workers who would have administered them had left for the Christmas holiday. In California, doctors are worried about whether there will be enough hospital staff members to both administer vaccines and tend to the swelling number of Covid-19 patients.

These sorts of logistical problems in clinics across the country have put the campaign to vaccinate the United States against Covid-19 far behind schedule in its third week, raising fears about how quickly the country will be able to tame the epidemic.

Federal officials said as recently as this month that their goal was to have 20 million people get their first shot by the end of this year. More than 14 million doses of the Pfizer and Moderna vaccines had been sent out across the United States, federal officials said on Wednesday. But, according to the Centers for Disease Control and Prevention, just 2.8 million people have received their first dose, though that number may be somewhat low because of lags in reporting.

Compounding the challenges, federal officials say they do not fully understand the cause of the delays. But state health officials and hospital leaders throughout the country pointed to several factors. States have held back doses to be given out to their nursing homes and other long-term-care facilities, an effort that is just gearing up and expected to take several months. Across the country, just 8 percent of the doses distributed for use in these facilities have been administered, with two million yet to be given.

The holiday season has meant that people are off work and clinics have reduced hours, slowing the pace of vaccine administration. In Florida, for example, the demand for the vaccines dipped over the Christmas holiday and is expected to dip again over New Year’s, Gov. Ron DeSantis said on Wednesday. 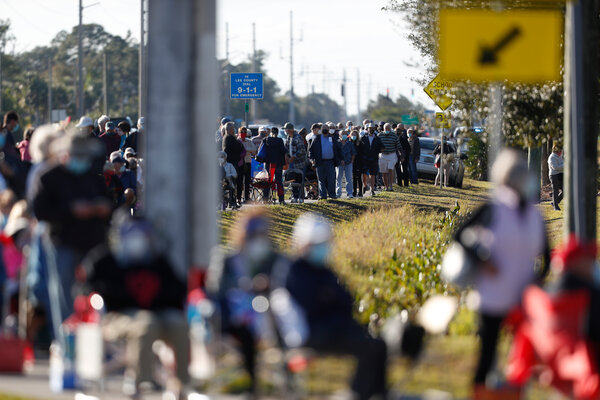 And critically, public health experts say, federal officials have left many of the details of the final stage of the vaccine distribution process, such as scheduling and staffing, to overstretched local health officials and hospitals.

“We’ve taken the people with the least amount of resources and capacity and asked them to do the hardest part of the vaccination — which is actually getting the vaccines administered into people’s arms,” said Dr. Ashish Jha, the dean of Brown University’s School of Public Health.

Federal and state officials have denied they are to blame for the slow rollout. Officials behind Operation Warp Speed, the federal effort to fast-track vaccines, have said that their job was to ensure that vaccines are made available and get shipped out to the states. President Trump said in a tweet on Tuesday that it was “up to the States to distribute the vaccines once brought to the designated areas by the Federal Government.”

“Ultimately, the buck seems to stop with no one,” Dr. Jha said.

These problems are especially worrisome now that a new, more contagious variant, first spotted in Britain and overwhelming hospitals there, has arrived in the U.S. Officials in two states, Colorado and California, say they have discovered cases of the new variant, and none of the patients had recently traveled, suggesting the variant is already spreading in American communities.

The $900 billion relief package that Mr. Trump signed into law on Sunday will bring some relief to struggling state and local health departments. The bill sets aside more than $8 billion for vaccine distribution, on top of the $340 million that the C.D.C. sent out to the states in installments in September and earlier this month.

That infusion of money is welcome, if late, said Dr. Bob Wachter, a professor and chair of the department of medicine at the University of California, San Francisco. “Why did that take until now when we knew we were going to have this problem two months ago?”