Yes, you can help a cognitively impaired person participate in the election. But heed these two guidelines. 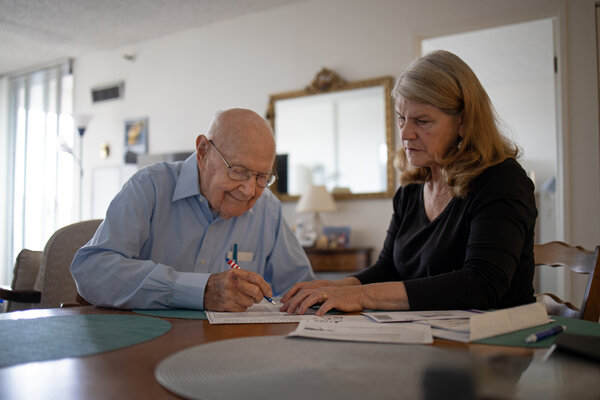 Edward Kozlowski often told his daughter how his father had walked across Siberia to come to America.

Born in Chicago 99 years ago, Mr. Kozlowski grew up on Midwestern farms. He left West Point during World War II to enlist in the Army Air Corps and made four flights over Europe on D-Day. A mechanical engineer, he spent much of his career at NASA and at Texas A&M.

And throughout his adult life, Mr. Kozlowski, a registered Republican, voted in virtually every election. “In my family, voting was the highest honor of citizenship,” his daughter, Judith Kozlowski, said. “You owed it to your country to vote; that was always the message.”

It remains important to Mr. Kozlowski, now a resident of an independent living facility in Chevy Chase, Md. He didn’t want to vote in person this year, wary of exposure to the coronavirus, so his daughter helped him request a mail-in ballot — even though he has developed dementia.

“Some days he’s right on the mark, sometimes he’s not,” said Ms. Kozlowski, 68. Her father can grow disoriented; prone to wandering, he requires round-the-clock caregivers. Yet he watches “The PBS NewsHour” and CNN “religiously,” his daughter said, and tuned in for the presidential and vice-presidential debates.

He has macular degeneration, so Ms. Kozlowski read him the ballot during short, kitchen-table sessions over several days. It probably helped that as a former federal prosecutor and elder justice consultant, she knew the rules better than most.

Her father could tell her which candidates he wanted to vote for.

And that is all it takes.

“There are many misperceptions of what ‘capacity to vote’ is,” said Charles Sabatino, director of the American Bar Association Commission on Law and Aging. “Incapacity to follow a recipe and cook dinner doesn’t mean incapacity to vote. The inability to remember your grandchildren’s names doesn’t mean you can’t vote.”

What is required — as the commission and the Penn Memory Center point out in a new guide — is the ability to express a preference.

“Can you pick among the choices?” said Dr. Jason Karlawish, a geriatrician and co-director of the Penn Memory Center. “That’s it.”

The Census Bureau has reported that more than 23 million American adults — close to 10 percent — have conditions limiting mental functioning, including learning and intellectual disabilities and Alzheimer’s disease or other forms of dementia.