Greta's campaign a chance to learn about autism – advocate 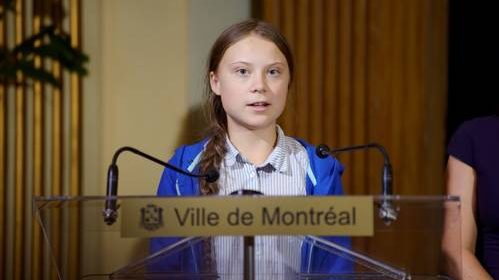 The founder of the autism advocacy organisation AsIAm says the world can learn as much about autism as it can about climate change from teenage activist Greta Thunberg.

Speaking about the backlash Ms Thunberg has received recently, Adam Harris said online bullying is the campaigner’s biggest cause of stress – not autism.

Describing how Ms Thunberg’s experiences can be used as a positive by providing an insight into the disorder, he gave the example of her arrival in New York after a two week journey across the ocean.

“The image that keeps coming to my mind was when her boat arrived and she was being welcomed and she was what I would call ‘stimming’,” he said.

“To other people it would have looked like fidgeting but in fact it is a way that autistic people regulate themselves.

“It probably looks very unusual to members of the public but [it happens] because the autistic brain – even at rest – processes a lot more information than people who aren’t autistic, and that energy has to go somewhere. Greta would have been in a confined space for several days and needed to regulate herself.”

Mr Harris also pointed to the level of passion and focus Ms Thunberg is bringing to her role, which he says is a positive trait of autism. “People with autism have scattered skill sets,” he said.

“That means that when we are good at something we are really good at it, but also then the things we struggle with, we really struggle with.

“So in actual fact, for an autistic person, following their passion is one of the best things they can do for their mental health.”

The campaigner expressed his hope that the conversation taking place around the climate activist’s disorder would help the advances already taking place in towns and communities throughout Ireland.

“We need to get beyond the idea that autism is something that is just for the psychologist or the teacher. It is something that, if you want to be inclusive, you need everyone in society to know about it, to embrace it and to understand it.

“That’s why we were delighted last year that we worked with SuperValu to make Clonakilty Ireland’s first autism friendly town. That was followed up earlier this week when we announced another 11 towns around the country are becoming autism friendly.”

Speaking to his radio listeners, Mr Tubridy said: “It’s one thing campaigning, it’s another thing causing anxiety to a generation.

“It’s not good for her mental health or her well-being.”

Describing Mr Tubridy’s commentary as “an opportunity” to learn more about autism, Mr Harris said: “I know Ryan and I am sure he meant well by his comments.

“I would love to see Ryan come on one of our autism training [days] and learn about the issue. He would be more than welcome.”