Granulocytes may weaken immune response in connection with COVID-19 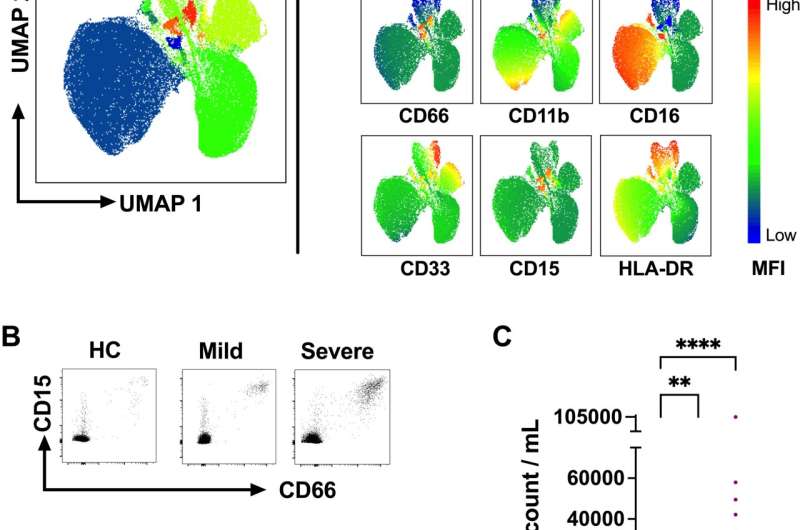 Information on granulocytes helps to understand mechanisms associated with COVID-19 and other infectious diseases. Such information also promotes the development of better diagnostic methods and therapies.

Most of the white blood cells in humans are neutrophils, which have received a lot of attention during the coronavirus pandemic due to their numbers growing in conjunction with COVID-19. However, their role in the disease remains partially unknown.

Low-density granulocytes (LDG) are a type of neutrophils whose number has been observed to grow particularly in connection with certain autoimmune diseases and cancers, such as rheumatoid arthritis, melanoma, liver cancer and breast cancer. Increased levels of these granulocytes have also been associated with septicaemia, but their general role and functioning in infectious diseases are yet to be comprehensively described.

The emergence of the SARS-CoV-2 virus and the ensuing pandemic has demonstrated a need to investigate mechanisms of acute respiratory infections in more detail. In a recently completed study, researchers from the University of Helsinki studied LDG levels in patients suffering from acute COVID-19. The goal was to determine the role, if any, of LDGs in the disease.

The results were published in the PLOS Pathogens journal.

A total of 34 hospitalized patients and 21 outpatients with mild symptoms were included in the study. The researchers used flow cytometry to measure LDG levels, detecting a significant increase in LDGs in the blood of acute COVID-19 patients compared to healthy control subjects.

“LDGs are cells associated with the innate immune response, and they fight acute infections. However, their effect on the progression of COVID-19 appears to take place through an inhibiting effect on the proliferation and division of T lymphocytes, consequently potentially suppressing part of the adaptive immune response against the virus,” says Luz Cabrera, doctoral student at the University of Helsinki.

The researchers identified several sub-types of LDGs in the acute COVID-19 patients, with four different LDG populations displaying distinctive stages of development. According to the researchers, the stages most likely reflect emergency myelopoiesis, that is, the production of granulocytes in the bone marrow.

The researchers linked the elevated LDG levels to an increased neutrophil demand and, consequently, their activation in the circulation. This matches an inflammatory process where neutrophil progenitors, or immature neutrophils, are produced at a rapid rate.

The researchers consider the immunosuppressive capacity of neutrophils demonstrated in the study a significant find, observed when they were isolating LDGs from the patients. When isolated in the laboratory, the cells began to secrete substances which inhibit T lymphocytes from dividing.