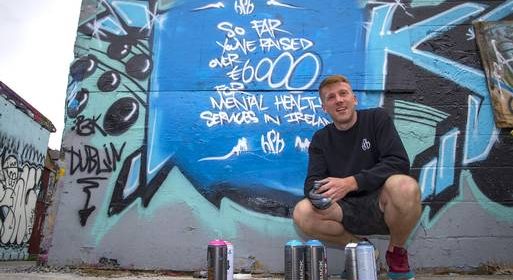 When depression laid Stephen Considine low, it was art that helped him express how he really felt.

Rather than lock his emotions away, he painted them onto walls – bringing his suffering into the light. It’s become his passion and as well as helping him he’s using it to destigmatise mental illness.

After suffering severely from depression and ADHD, the 30-year-old realised that being creative helped him to open up about how he felt.

“It’s a social thing, but it’s also just a creative outlet for me. It’s the therapeutic process of it. I completely lose track of time and everything when I’m painting. I’m obsessed with colours and getting stuff right.

“When you’re suffering from a mental illness and you can’t even recognise your own emotions and you’re just completely numb. You can’t verbalise anything,” said Mr Considine from Arklow, Co Wicklow.

“My whole life, whenever that happened, I always painted or drew and I never even realised until I was in St John of God’s Hospital and I was suffering severe, severe depression and I couldn’t give psychologists anything because I didn’t even know what was going on. “I’d go two or three times a week to art therapy in the Hospital and I was painting. There’s no airs or graces about it, it’s just me painting what’s coming out of my subconscious to demonstrate the things going on in the back of my head.

“When I first did art therapy, dark s**t came out, like really dark stuff. It was the materials I chose and the colours I was using.

“The colours were dark and the strokes were hard and I wouldn’t use a full page it would only be a little bit because I was insecure and intoverted. It was a culmination of the things going on in my brain and it helped me to work on and identify all of my feelings and emotions.

“My advice to anyone suffering is to just do anything that is creative and you feel a reflection of your soul in. Art is a reflection of the soul. Graffiti doesn’t alienate anyone. It’s not behind red tape – everybody can do it. It’s creative arts, like dancing or writing a poem, anyone can do it, even if it’s done badly, the whole thing is having a means to communicate and express yourself.” Since Mr Considine, or Conso as he is known in Arklow and in the art word, began his own journey of self healing, he has dedicated much of his own time to also helping others.

On most of his paintings, the service numbers are painted for Pieta House and Talk to Tom, who help people in suicidal distress or engaging in self-harm. After starting to spray on free walls across the county, it was obvious the effect that his art was having on people suffering with mental health issues and mental illnesses.

Along with some friends, Mr Considine set up BiPolar Bear (BPB), originally a clothing brand whose purpose was to say “Yeah, I’m cool about being bipolar’, what’s the issue?”

A common feature in his artwork is the BPB logo, which he says he uses “to promote mental health awareness. The city he says, “is a free canvas to destigmatise mental health issues”.

BPB now offers a range of services through its website and stages public events across the country. “We want to normalise it to the point where people can talk about it, to make it more accessible,” he said.

“Initially the clothes were just a vessel for pieces of graffiti, which spreads the message that ‘I’m OK to talk about mental health’.

“Obviously that’s a powerful statement in itself and clothing is one of the best ways to form an identity for yourself because you can’t really change much about yourself bar getting a haircut.

“But the turns out we get a lot more feedback from the media work and then we started the blogs  on the website because we have such a narrow experience of mental health issues. There’s so many ways it can affect you directly and indirectly and there are so many different types that people write into us about.

“The latest is a girl who has dysphoria and an eating disorder and there are bipolar people, people with schizophrenia, ADHD, Asperger’s, what ever you’re looking for, the blogs are there.

“Unintentionally we do a lot of counselling. Unchartered counselling. It’s just people are in a bad way and they don’t know who to turn to, so we just offer a small bit of support and a lot of guidance. We chat to them ourselves, but then we also direct them to services we know can help.”

Latest CSO reports (2016) reveal that 437 people died by suicide in Ireland that year. A report last year by National Women’s Council of Ireland (NWCI) found that Ireland has the highest suicide rate for female children in the EU.

Furthermore, one in eight Irish people have experienced chronic depression recently, according to a 2018 health study by Eurostat, the EU central statistics office. Ireland now has the highest rate (12pc) of chronic depression in Europe.

As a survivor of suicide, Mr Considine said that there are two major problems facing people with poor mental health in Ireland.

The first problem, he says, is that Irish people are only now beginning to allow themselves to open up about the issue they are facing. The other problem according to the mental health advocate is that mental health and mental illnesses are not distinguished in Ireland. The latter of the two receives far less attention than it needs as a result. “A lot of people are getting more aware of their mental health, but I think it’s actually quite dangerous right now because there’s a big difference between mental health and mental illness and if you see people online talking about mental health and you have an illness, you can’t relate to them and you’re only going to feel more isolated.”

“The waiting lists for people on death’s door is crazy. My mate had to wait six months and I don’t know how he made it. From the time he attempted suicide, he’s waiting six months and he attempted to do it again. Luckily his Da intervened or he’d be gone.” Pieta House have had more than 5,300 people through their doors already this year with a quarter of the year left. The charity expects to break last 2018’s record high of just over 8,000.

“Not until we get to the point where people treat it like they do their physical health will there be a notable change,” he said.

“You would get a physio or a personal trainer for your physical health or going to the doctor for a cough. There needs to be the exact same level of services for mental health. You should have emergency services for mental health. There needs to be an ambulance there that you can ring if someone is really suicidal, not just a physical health ambulance.

“Doctors should have a psychologist there that you can just check into. That’s the only way that it will get better – if we start treating it as an equal to physical health. You can be the most physically health person in the world, but if you’re mentally unwell it means nothing.

“So once the attitude shifts in that paradigm we’re sucking diesel, but I think in Ireland we are only coming to terms with being able to express ourselves through years of oppression. Most of our creative people and artists used to have to leave the country to get creative.

“We are getting better, but there are some places are slower to catch up. Once people come to terms with being able to express themselves we’ll be fine.”

If you, or someone you know has been affected by mental health issues you can contact: