The founder of OneWave, the not-for-profit surfing group that brought Prince Harry and Meghan Markle to Bondi Beach late last year, recognises how much the ocean can help mental health. 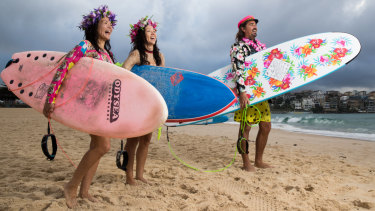 "Surfing is the best escape," Mr Trebilco says. "When you're riding a wave, you forget about all the negative stuff going on in your life. It gets you smiling again when you're going through the funk."

The group is launching a scheme to borrow a free surfboard – for experienced surfers who can't afford their own or newcomers who might not even live near the beach – on Fridays.

It ties in with OneWave's weekly Fluro Fridays, which encourage surfers to dress in bright outfits, share stories in an "anti bad vibes circle" then go surfing.

"We wanted to give more people the chance to get in the ocean and ride waves and openly talk about mental health," Mr Trebilco says. "I got diagnosed with bi-polar seven years ago. To me, one wave is all it takes to get my stoke back."

While surfers are talking about mental health more, Mr Trebilco believes it is still hard to reach out for help.

"We're still losing eight people a day [nationally] to suicide so the more things that can happen to make people know they're not alone the better," he says.

Like the fluoro outfits, the Free The Funk board is designed to stand out.

Twins Aprilla and Dabriella Quayle, who joined OneWave after losing a bodyboarding friend to suicide, says it will allow anyone struggling to join a friendly community.

"Mental health is obviously something that isn't visible," Aprilla says. "When we dress in these bright colours, it makes it more visible for everyone to see and it starts that conversation of 'how are you going, are you OK?' and getting people talking." 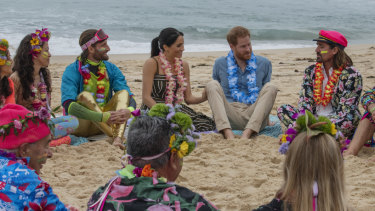 The scheme is starting at Bondi, Cronulla and Maroubra, with hopes of extending to other beaches.

Artist Cam Scott has designed a board from Mick Fanning's MF Softboards that will be available free by booking online with rental company Awayco or visiting a store.

The scheme is being launched at OneWave’s sixth birthday that is being celebrated at 103 beaches in 26 countries – creating a "fluoro wave" of linked hands for mental health – this Friday.

Fanning, the three-time world champion surfer who went through his own struggles after a near-miss with a shark in 2015,  wants to see more Free The Funk boards on beaches.

"From personal experience I know how getting into the water to have a chat with mates about what's going on can genuinely change your life," he says.