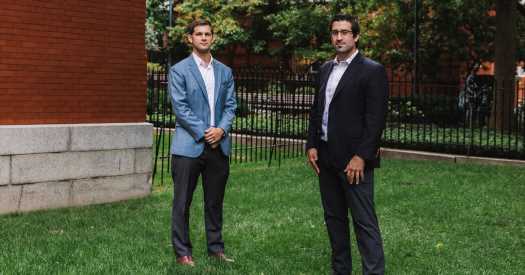 A potential therapy for amyotrophic lateral sclerosis, a fatal neurological disorder, may allow patients to live several months longer than they otherwise would have, according to a study published Friday.

The two-drug combination, dreamed up by two college students, is one of several potential treatments raising the hopes of patients with A.L.S., also known as Lou Gehrig’s disease. The paralytic condition steals people’s ability to walk, speak, eat and ultimately breathe, typically causing death within two to five years.

There are only two approved A.L.S. medications, neither very effective. But advocacy efforts by patients and organizations, along with the Ice Bucket Challenge, a highly successful fundraising campaign, have galvanized research into more than 20 therapies that are currently in clinical trials.

The two-drug combination, called AMX0035, was conceived seven years ago by Joshua Cohen and Justin Klee, then a junior and senior at Brown University, with the goal of preventing the destruction of neurons that occurs in many brain disorders. It is a combination of an existing supplement and a medication for a pediatric urea disorder.

Last month, a study of 137 patients reported that AMX0035 slowed progression of A.L.S. paralysis by about 25 percent more than a placebo. Measuring patients using a scale of physical function, researchers found that those receiving a placebo declined in 18 weeks to a level that patients receiving the treatment didn’t reach until 24 weeks, according to the study’s principal investigator, Dr. Sabrina Paganoni.

But because that trial was conducted for only 24 weeks, it left unanswered a crucial question of whether the treatment extended survival for the patients receiving the therapy. After that study ended, 98 of the participants, who had not been told whether they had received placebo or therapy, were given the option of taking the therapy for up to 30 months, a format called an open-label extension study.

Ninety patients did so, including 34 from the placebo group, who began taking AMX0035 about seven months after the 56 who had received it from the beginning. The research team, led by Dr. Paganoni, a neuromuscular medicine specialist at Massachusetts General Hospital’s Healey & AMG Center for A.L.S., and Dr. Merit Cudkowicz, the Healey Center’s director, followed the patients over nearly three years.

The new study, published in the journal Muscle and Nerve, reported that people who received AMX0035 during the trial and through the open-label extension lived about 6.5 months longer than people who had originally received the placebo — a median of 25 months compared to 18.5 months.

“In addition to the significant functional benefit previously reported, people taking AMX0035 appear to live several months longer,” said Neil Thakur, chief mission officer of the A.L.S. Association, which gave a grant for a portion of the study, most of which was financed by the drug maker. “That is a very meaningful benefit for people affected by this devastating, fatal disease.”

The A.L.S. Association is urging the Food and Drug Administration to expedite its review process and grant approval as soon as the company applies for it — but to require rigorous follow-up studies, since the original study was a Phase 2 trial instead of the larger and longer Phase 3, which is often required for approval. The association also wants the company that makes the treatment, Amylyx, a Massachusetts start-up the students founded, to seek the agency’s permission to provide the drug for compassionate use while it is still being evaluated.

Experts who weren’t involved in the study said the data was encouraging, but that important unanswered questions remained about the potential therapy. One unknown is what benefit the drug would have when compared with patients who never received it at all and received only placebo for 30 months, said Dr. Robert Miller, director of clinical research at Forbes Norris MDA/A.L.S. Research Center at California Pacific Medical Center. Still, he said he considered the results a “base hit single.”

The study involved patients who developed symptoms within 18 months before the trial and were affected in at least three body regions, generally signs of fast-progressing disease. Most were already taking one or both of the approved A.L.S. medications: riluzole, which can extend survival by several months, and edaravone, which can slow progression by about 33 percent. That could suggest that AMX0035 — a powder that patients mix with water to drink or ingest through a feeding tube twice daily — might work on top of existing treatments.

Researchers said that according to a statistical model that included factors like patients’ age and their score on a 48-point A.L.S. functional scale before they entered the trial, patients who received AMX0035 from the beginning had a 44 percent lower risk of death during the study period.

Dr. Walter Koroshetz, director of the National Institute of Neurological Disorders and Stroke, who wasn’t involved in the trial, said that the data suggested a “powerful impact that’s pretty striking” in extending survival for patients who got the drug for the 24 weeks of the trial — when they were earlier in the disease than patients who started the drug after the trial.

But, he said, it wasn’t clear how much those who first received 24 weeks of placebo benefited when they took the drug. “It could mean that the drug is really effective and people who got the drug late really would have been dead at 12 months instead of 18,” Dr. Koroshetz said. “Or, the other way of thinking about it is that the drug is not effective unless you get it early. There’s no clue here to which one of those is true.”

Dr. Koroshetz also said that the reality that many of the patients ultimately died “emphasizes how devastating A.L.S. is.”

“Even for the people who got the drug early and continued to get the drug,” he noted, “there’s still only 2.5 years’ survival.”