‘Doing the beam for herself’: Inside Biles’ return to competition

It’s the question on all of our minds.

Why has Simone Biles chosen to return to the mat tonight and compete in the Women’s balance beam final in Tokyo after abruptly dropping out of all her other events last week? 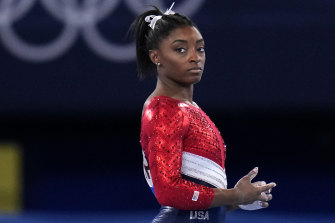 “She’s got the beam routine in her head, she could do it in her sleep, ” says former Olympics gymnastics coach Peggy Liddick. “It’s just the acrobatic [dismount], when she’s flying through the air and will have to land on her feet.”Credit:AP

Biles has spoken candidly about her mental health battles after experiencing the so-called “twisties” mid-air during her vault competition, both of which caused her to pull out of the subsequent even bars, floor exercise, and the team and individual all-around events.

“It’s the craziest feeling ever,” Biles wrote on Instagram about the “twisties” after she suffered a mental block during the vault that caused her to lose internal awareness of where she was – “literally can not tell up from down” – and made a split decision to do a one-and-a-half twist in the air, instead of her planned two-and-a-half twist.

So, why is Biles returning to competition tonight, at 6:50pm Australian time?

Former Olympics gymnastics coach Peggy Liddick isn’t surprised that Biles has chosen to compete in the beam, even though the “twisties” are “almost every gymnast coach’s worst nightmare, and [that of] the gymnast of course, as well”. (If a gymnast loses where they are mid-air and lands on their neck, they can break it.)

“Balance beam, you have that beam underneath your feet, you feel a little more secure,” says Liddick, a former Gymnastics Australia national coach and long-time personal coach to American Olympic gold medal-winning gymnast Shannon Miller. “And she’s [Biles] only doing single skills on the beam, therefore she’s only doing skills on one axis, it’s a lot simpler for her.”

This is in stark contrast to the vault and the events that the 24-year-old athlete pulled out of, which require a gymnast to flip and twist in multiple directions and therefore come with a far greater risk of experiencing the “twisties”.

“She’s going to go back and forth on the beam, [do] front [somer]saults and back [somer]saults,” says Liddick, about Biles’ likely performance tonight. “I’m not her coach, but I’d predict tonight that she’ll just do a simple double back dismount, only rotating [her body] on one axis, and not do a double full twisting double back [dismount].” She is referring to the beam dismount that Biles – who won bronze in the beam in Rio five years ago – usually performs.

A simpler dismount than usual will not impair Biles’ chances for a gold medal, says Liddick.

“She’s really very steady on beam, due to her low centre of gravity, so execution is usually very high. Even if her difficulty score tonight will most likely be a little lower, her execution will more than make up for it.

“The big question tonight is, if [Biles] chooses to just do a simple double back dismount with no twist, will her muscle memory take over and accidentally do the twist,” says Liddick, who coached Miller through the “twisties” when the gymnast experienced them in the lead-up to the 1996 Olympics. “You’re setting it up to just do a double back, but it might automatically do a twist in there because you’ve done 10,000 repetitions [like that].”

Some of the other factors that contribute to the “twisties”, says Liddick, are stress and when a gymnast’s body isn’t relaxed, which impedes the athlete’s ability to rely on muscle memory.

Over the last week, Biles – who has received an enormous amount of praise for prioritising her mental health – has said that some of the stress she’s been experiencing has been the result of coming into the Tokyo Games with a desire to compete for herself, and feeling thwarted in her efforts to achieve that goal. “I came in and felt like I was doing it for other people,” she said last week. “That just hurts my heart that doing what I love has been kind of taken away from me to please other people.”

And when an athlete loses internal motivation, it can be a significant and “quite alarming” psychological hurdle, says Australian Institute of Sport mental health lead Mary Spillane.

“Who we are as people and what we think about ourselves is incredibly important to how well we’re functioning in the world,” says Spillane, who is a clinical psychologist by training. “And if you’ve established this identity about being an elite athlete and then have the sort of realisation that that’s not internally motivated, but based on what other people want you to do, it sort of creates this feeling of, ‘Who am I? What do I want? What is important to me?’”

This is why, says Liddick, Biles’ decision to compete tonight represents a win no matter how she performs.

“If you’ve established this identity about being an elite athlete and then have the sort of realisation that that’s not internally motivated, but based on what other people want you to do, it sort of creates this feeling of, ‘Who am I?’”

“I think, tonight, she’s doing the beam for herself. I think she has seen that people are listening to her, and she goes ‘Wow, this isn’t as hard as it was going to be’, like ‘I don’t feel as guilty as I thought I would’ve if I pull out of these scary events’,” she says of Biles, who she calls a “once-in-a-hundred years’ athlete”. “If she can pull this off tonight, and she’s already a hero in everybody’s mind, she will, I think internally feel that the Games were not a total loss, in her own mind. It’s a little internal battle that she wants to win. Even if she finishes in last place, having the courage after all this week to get there, to put on a leotard and say, ‘I’m going to give it a go’, wow. At 24 years old, to have that courage. It’s a lesson for all of us.”