Do you suffer from 'female fury'? Here's how to make it work for you 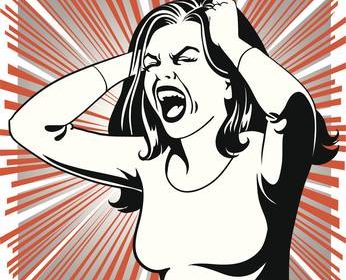 Annoyance, exasperation, irritation, frustration. For most of us, these feelings are part of the ever-changing emotional weather of day-to-day life. How often, on a given day, do you find yourself swallowing down resentment, or frustration? Or biting your tongue in order to smooth over conflict in social settings, at work, or at home?

But according to some experts, female fury is at epidemic proportions. Mike Fisher, psychotherapist, and founder of the British Association of Anger Management, has observed this trend in his decades of experience in the field. Some years ago, his organisation carried out a study in which they surveyed over 12,000 people. “What I identified, is that women are much angrier than men,” he says.

He’s not the only one to have noticed it. Writer and broadcaster Soraya Chemaly tapped into a little-acknowledged wellspring when her book about women and anger, Rage Becomes Her (Simon & Schuster UK) became a global phenomenon when it was published last year.

So what is behind this tidal wave of rage? According to clinical psychologist Dr Malie Coyne, studies suggest there are some common routes to anger for women, most notably feelings of powerlessness or injustice. Gender inequality in society, the workplace and the home, play a huge part.

READ MORE: Crust almighty! Is your boss ‘breadcrumbing’ you?

“Women are paid less, they aren’t as valued in the workplace, when they hit glass ceilings it’s very hard for them to earn more than that. In many ways it’s still a men’s world,” says Mike Fisher.

For many women, this imbalance continues into the domestic sphere. “When a woman is working and she comes home from work, she feels she has to do so much more than the man does. When it comes to child-rearing, once again, women are far are more responsible than men. That creates a lot of tension and conflict. A lot of women don’t feel listened to, they don’t feel valued, they don’t feel appreciated, they don’t feel supported. And then of course they become resentful, they act out their anger.”

Women, Fisher says, tend to act out anger in ways that are more “passive aggressive” than “active aggressive. That gender difference comes down to how young girls are socialised from an early age, argues Soraya Chemaly.

READ MORE: Chore wars: is the division of housework putting a strain on your relationship?

She herself learned the lesson that girls don’t voice their rage from her mother. When she was 15 she came home one day to find her mother standing on their balcony smashing her wedding china on to the floor below piece by piece. “When she was done, she walked back into the kitchen and asked me how my school day had gone, as though nothing out of the ordinary had happened,” she writes in Rage Becomes Her. “We never talked about anger,” she says. “My mother may have been livid, but she gave every appearance of being cheerful and happy.”

By the time she was a young adult, Chemaly had developed the firm belief that she was not someone who experienced anger. She didn’t identify feelings of anger in herself at all.

It was only much later that it would dawn on her how damaging that belief was. “It is impossible to be human and not feel anger” she says, speaking long-distance from the States. “It is a signal emotion. It is necessary to our survival and well-being. But for so many girls and women – and I grew up in a Catholic and Anglican family, that idea of anger is incompatible with femininity and with understanding yourself as a good person. And I have seen that anecdotally. I have seen it politically. I have seen it in so many studies.

READ MORE: The millennial time bomb: how long before they stop being anxious and start getting angry?

“Women are so uncomfortable, as are the people around them, with the idea of a righteously angry woman. Particularly if she has this anger and it is not associated with the role society has given her, which is primarily to reproduce and nurture others.”

Little girls, she says, learn early “that there are penalties for displaying anger, we know that there are risks to expressing your needs. Which is what I think anger is – it’s a self-defensive emotion. It’s provoked by care or threat or indignation. The question is, why do we learn as girls, which we do, to ignore those feelings. What possible good can come of that, to us?”

No good at all, according to Fisher. He is unequivocal that repressed or unexpressed anger blights lives. A myriad of poor mental and physical health outcomes can be traced back to mismanaged anger. He cites the higher incidences of depression, binge-drinking and smoking amongst women as evidence of the damage internalised anger is wreaking.

“Depression – and of course there are different types of depression, is anger turned inwards,” he explains. “When it comes to binge drinking. It’s an opportunity to release the frustration of the day of the week of the month, and act that out. When it comes to smoking, where there’s smoke there’s always fire.”

Repressed anger, he explains, is deeply self-destructive. “Women tend to self-harm more than men, have higher rates of suicidal thoughts and eating disorders than men,” says Fisher. “In my view that is part and parcel of how they internalise the anger rage and fury on themselves. When you internalise your anger, you are turning it in on yourself and you are harming yourself, in very subtle but sophisticated ways. You don’t even know that you angry.”

READ MORE: Ask Allison: ‘Why am I so angry all the time?… even a slow-moving queue can provoke it’

But anger can be expressed positively, as assertiveness. And “being assertive is vital to your emotional well-being,” Coyne stresses. People who lack assertiveness can find themselves holding in anger which ends up coming out in burst of anger that are inappropriate towards other situations,” she says. “Anger comes from an unmet need. So if you are not able to express your need, it will impact you in a really significant way. Apart from anxiety and depression and stress and all the physical stuff, I think your sense of self is hugely impacted. Because you are walking around the world not getting your needs met.”

There is a cultural aspect to this too, and assertiveness, Coyne believes, is a skill that a lot of Irish people need to learn. “I think assertiveness is something that people really struggle with. I’m half-Dutch and in Holland I find that there’s less of this people-pleasing, ‘I’m grand, I’m grand’… there, if you’re pissed off, you’re pissed off and that’s OK. In Ireland, you just say you are fine.”

Coyne is adamant that both genders need to reframe their relationship with anger. “I think girls and boys should be encouraged to recognise from an early age that anger is a completely normal human emotion. We’re all social beings, we all feel angry sometimes. It’s just how we express it.”

Dr Malie Coyne outlines some techniques for how you can make your anger work:

⬤ Cut the shame: The first step to addressing anger in a more positive way is being aware first of all that anger is a normal and should not induce shame.

⬤ Let your feelings guide you: Try to work out what your anger is telling you. It might be that you want to be paid better in your job, or you want things to be different in your relationship. Try to ask yourself ‘what is the message behind my anger?’

⬤ Stand up for yourself: Express yourself firmly and confidently, using assertive body language, trying not to be too dramatic.

⬤ Use your anger: Let it drive the passion in you towards something constructive.