In excruciating pain with lesions on her face and scalp, Tracey Fine lay for 13 hours on a gurney in an emergency room hallway.

All around her, Covid-19 patients filled the beds of a hospital in Madison, Wis. Her nurse was so harried that she could not remember Ms. Fine’s condition, and the staff was slow to bring her pain medicine or food.

In a small rural hospital in Missouri, Shain Zundel’s severe headache turned out to be a brain abscess. His condition would typically have required an operation within a few hours, but he was forced to wait a day while doctors struggled to find a neurosurgeon and a bed — finally at a hospital 375 miles away in Iowa.

From New Mexico to Minnesota to Florida, hospitals are teeming with record numbers of Covid patients. Staff members at smaller hospitals have had to beg larger medical centers repeatedly to take one more, just one more patient, but many of the bigger hospitals have sharply limited the transfers they will accept, their own halls and wards overflowing.

In the spring, the pandemic was concentrated mainly in hard-hit regions like New York, which offered lessons to hospitals in other states anticipating the spread of the virus. Despite months of planning, though, many of the nation’s hospital systems are now slammed with a staggering swell of patients, no available beds and widening shortages of nurses and doctors. On any single day, some hospitals have had to turn away transfer requests for patients needing urgent care or incoming emergencies.

And rising infection rates among nurses and other frontline workers have doubled the patient load on those left standing.

There is no end in sight for the nation’s hospitals as the pandemic continues to hammer cities and rural areas across the country, totaling 13 million cases so far this year. And public health experts warn that the holidays may speed the already fast-moving pace of infection, driving the demand for hospital beds and medical care ever higher.

Health care systems “are verging on the edge of breaking,” Dr. Michael Osterholm, a member of President-elect Joseph R. Biden’s Covid-19 advisory council, said in a podcast this month.

The public does not realize how dire the situation is, Dr. Osterholm said, and may respond only “when people are dying, sitting in chairs in waiting rooms in emergency rooms for 10 hours to get a bed, and they can’t find one, and then they die.”

When Ms. Fine went to UW Health’s University Hospital in Madison, she found doctors there overwhelmed and distracted. “They just parked me in a hallway because there was no place for me to go,” said Ms. Fine, 61, who was eventually found to have a severe bout of shingles that threatened her eyes.

She had missed her annual checkup or a shingles vaccination because of the pandemic. 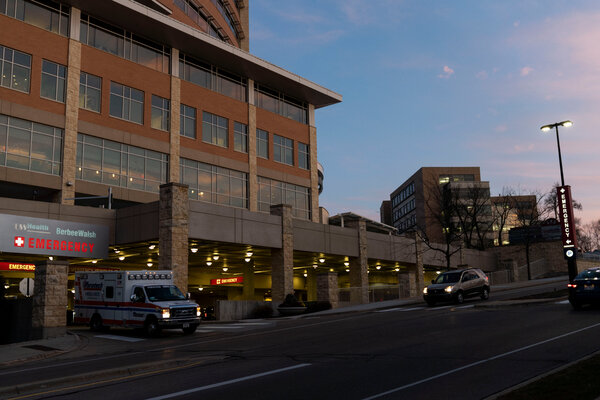 Admitted to a makeshift room with curtains separating the beds, Ms. Fine watched the chaos around her. A nurse did not know who she was, asking if she had trouble walking or heard whooshing in her ears. She “was just completely frazzled,” Ms. Fine recalled, though she added that staff members were “kind and caring and did their best under horrifying conditions.”

Workers at the hospital issued a plea last Sunday, published as a two-page ad in The Wisconsin State Journal, asking state residents to help prevent further spread of the virus.

“Without immediate change, our hospitals will be too full to treat all of those with the virus and those with other illnesses or injuries,” they warned. “Soon you or someone you love may need us, but we won’t be able to provide the lifesaving care you need, whether for Covid-19, cancer, heart disease or other urgent conditions. As health care providers, we are terrified of that becoming reality.”

UW Health declined to comment directly on Ms. Fine’s experience, but acknowledged the strains the pandemic has imposed. While patients were sometimes boarded in the emergency room even before the new coronavirus surge, occupancy is now “super high,” said Dr. Jeff Pothof, the group’s chief quality officer.

UW Health is “starting to do things it hasn’t done before,” he said, including enlisting primary care and family doctors to work in the hospital treating seriously ill patients. “It works, but it’s not great,” he said. 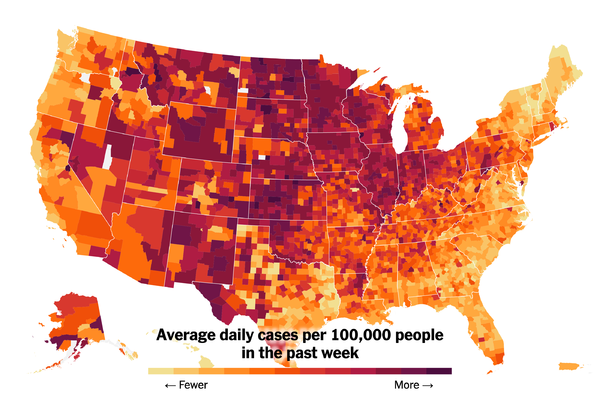 Covid in the U.S.: Latest Map and Case Count

A detailed county map shows the extent of the coronavirus outbreak, with tables of the number of cases by county.

Hospitals in St. Louis have been particularly hard-hit in recent weeks, said Dr. Alexander Garza, the chief community health officer for SSM Health, a Catholic hospital group, who also serves as the head of the area task force on the virus. Over the last month, SSM Health turned away about 50 patients that it could not immediately care for.

And nurses — already one of the groups most vulnerable to infection — are adding more and more hours to their shifts.

Hospitals are reassigning nurses to adult intensive care units from pediatric ones, doubling up patients in a single room, and asking nurses, who typically care for two critically ill patients at a time, to cover three or more, he said.

“If you’re not able to dedicate as much time and resources to them, obviously they’re not getting optimal care,” Dr. Garza said.

Some hospitals have joined in sounding the alarm: Supplies of testing kits, masks and gloves are running low.

The country never quite caught up from the earlier shortages, Dr. Osterholm said. “We’re just going to run into a wall in terms of P.P.E.,” he said.

Even if hospitals in some cities appear to have enough physical space, or can quickly build new units or set up field hospitals, staff shortages offset any benefit of expansion.

At any given time in recent weeks, a quarter of Intermountain’s nurses were out — sick, quarantining or taking care of a family member felled by the virus. Nursing students have been granted temporary licenses by the state to fill gaps, and the hospital system is scrambling to latch onto travel nurses who are in high demand across many states and expensive to hire.

To relieve pressure on its big hospitals, Intermountain is keeping more patients at its smaller centers, monitored virtually by specialists at the larger hospitals who consult with the local doctors via remote links.

Smaller hospitals are under significant stress. “We don’t have intensive care units,” said Tony Keene, the chief executive of Sullivan County Memorial Hospital, a rural hospital licensed for 25 beds in Milan, Mo. “We don’t perform surgeries or anything like that here. When we have Covid cases, it very much taxes our ability.”

His tiny hospital usually has no more than a half-dozen patients on a busy day, but may now treat twice that number. About a fourth of the hospital’s 100 employees, including Mr. Keene, have come down with the virus since March.

“It is sometimes a daily and hourly struggle to make sure we have adequate staff in the hospital,” he said. The hospital’s nurses, who typically work three 12-hour shifts a week, are taking as many as five or six shifts each week.

“We’re out here by ourselves,” Mr. Keene said. “We don’t have a larger system pumping money into us or something like that.” The hospital used federal Covid aid to invest in medical gas lines so patients could be given oxygen.

The sickest patients still must be transferred, but the larger hospital 35 miles away is awash in its own heavy volume of Covid patients and is reducing staff levels.

Even when hospitals in a community are talking weekly, if not daily, to discuss how to handle the overall spikes in admissions, few have room to spare in areas where numbers keep climbing. Many have reduced or even stopped providing elective surgeries and procedures.

“We’re all concerned about the surges we’re seeing now,” said Nancy Foster, vice president of quality and patient safety policy for the American Hospital Association. Patients who need special medical attention normally can be sent to a nearby urban area, but “many times those referral centers are full or nearly full,” she said.

Mr. Zundel’s case was a matter of life or death. He had a debilitating headache and “was not able to function at all,” he said. A larger hospital nearby was inundated with patients, so his wife, Tessa, took him to a small hospital in rural Missouri to be seen quickly. The doctors there recognized that he had a brain abscess, but could not immediately find a medical center to treat him.

“He was dying,” his wife said. Some hospitals had beds, but no available neurosurgeon. Staff members spent a full day trying to find somewhere he could get an operation.

“They just worked the phone until they found a solution,” she said. “They didn’t give up.”

Mr. Zundel, 48, was finally flown to the University of Iowa Hospitals and Clinics, where Dr. Matthew Howard, a neurosurgeon, performed an operation.

But Iowa is also turning away patients, Dr. Howard said. “Early in the crisis, we were being hammered by limitations in P.P.E. Now, the problem is the beds are full,” he said.

Dr. Dixie Harris, a critical care specialist at Intermountain, had volunteered in New York City during the height of the pandemic last spring. Doctors are now better able to treat the virus and predict the course of the disease, she said.

But they are also stretched very thin, caring for Covid patients in addition to their regular patients. “Almost nobody has had a real vacation,” she said. “People are really tired.”

And readmissions or the lingering health problems of Covid “long haulers” have compounded the intensified regimen for medical care. “Not only are we seeing the tsunami coming, we have that back wave coming,” Dr. Harris said.

Some health care workers say they feel abandoned. “Nurses have been crying out for months and months that this has been a problem, and we really have not gotten rescued,” said Leslie McKamey, a nurse in Bismarck, N.D. and a member of National Nurses United.