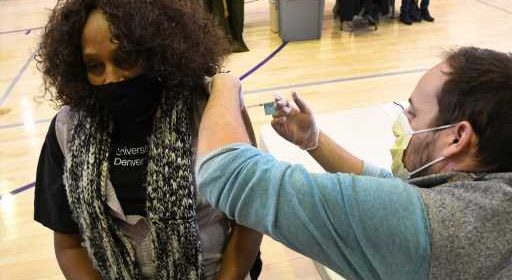 COVID-19 vaccine doses that were expected to arrive in Colorado this week are delayed after a winter storm impacted a distribution hub in Tennessee, the state health department announced Tuesday.

It’s unknown when the shipments, which include 133,000 doses, will arrive in the state. The doses initially were expected to arrive between Tuesday and Thursday.

“The state expects more information about when we will receive the vaccine as the weather clears and shipping operations resume,” the Colorado Department of Public Health and Environment said in a statement.

Other states — from Texas to Ohio — also are experiencing delays in vaccine shipments as parts of the U.S. face heavy snow and subfreezing temperatures.

The weather has disrupted shipments from a FedEx facility in Memphis and a UPS location in Louisville, Kentucky, that serve as distribution hubs.

The state health department said that because of the recent holiday weekend, it received doses Friday that were scheduled for this week.

“This decision helps us have enough on hand to work with providers to move doses around to prevent cancelations,” the agency said.

So far, 704,052 people in Colorado have received their first dose of COVID-19 vaccine and 313,842 people have gotten their second shot.