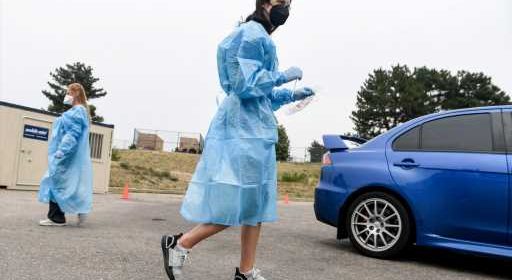 The odds that a Colorado resident will run across someone who’s contagious with COVID-19 in any large group are now higher than they’ve been since the start of 2021 — though how much people should worry about that depends on whether they’ve been vaccinated.

When so many people are contagious, it means that interactions will remain relatively risky, even if cases start to go down, said Beth Carlton, an associate professor of environmental and occupational health at the School of Public Health. Getting vaccinated, wearing masks and avoiding high-risk activities will help speed up the return to the relative freedom we had in the early summer, but “it takes a while,” she said.

The Colorado Department of Public Health and Environment’s COVID-19 data paints a mixed picture of whether the situation is improving. But what is clear is that unvaccinated people remain highly vulnerable, Carlton said. The state reported about 83% of those who are hospitalized now aren’t fully vaccinated.

New cases were down for a second week, with 11,561 reported in the week ending Sunday. But the percentage of tests coming back positive was up, reaching 6.58% over the last three days. That suggests the state might not have a complete picture of how widely the virus is spreading.

So far, Colorado has been spared the large increase in seriously ill children that some states have endured, though about 26% of new coronavirus cases are in people younger than 20.

Hospitalizations also were difficult to interpret. As of Monday afternoon, 980 people were hospitalized with confirmed or suspected COVID-19. That’s an improvement over the previous Monday, but a worsening compared to Saturday and Sunday.

The Centers for Disease Control and Prevention recommends everyone wear masks in indoor public places when their community has 50 or more cases for every 100,000 people. Only three Colorado counties have case rates lower than that: San Juan, Hinsdale and Lake. More than 10% of tests in Lake County were positive, though, suggesting the virus is spreading more widely than the case numbers show, and residents might want to mask up.

It appears that the rapid increase in cases and hospitalizations Colorado saw in August has slowed down, but it’s not clear if a decrease is starting, Carlton said.

“I think we’re at a very uncertain moment,” she said. “We’re seeing these kind of wild swings in the data.”

The most recent modeling report projects that if the current slowdown in new cases continues, hospitalizations would be expected to peak in September or October, without reaching levels seen last fall and winter. If the pace of new vaccinations doesn’t increase and people do more mixing, however, it’s possible hospitalizations could approach the December 2020 peak again.

But if 82% of people get vaccinated by late October, or the average person takes greater precautions, like wearing masks and practicing some social distancing, fewer people would be hospitalized. That timeline might be ambitious — it took about two months for Colorado to progress from vaccinating 70% of adults to reaching 75%.

While Colorado didn’t exceed hospital capacity last year, deaths were higher than expected once about 1,500 people were hospitalized for COVID-19. That’s consistent with findings in other states that more people die as the strain on hospitals increases, Carlton said.

It’s not clear what will happen this year, as hospitals deal with COVID-19, flu and other needs at the same time, Carlton said. Last year, other viruses were almost nonexistent as people stayed home and wore masks when they needed to go out.

Getting vaccinated against both COVID-19 and the flu is the best way to reduce the odds of overwhelming the health care system, Carlton said.

“This year we’re moving into uncharted waters again,” she said. “We want to avoid putting undue pressure on the hospitals.”