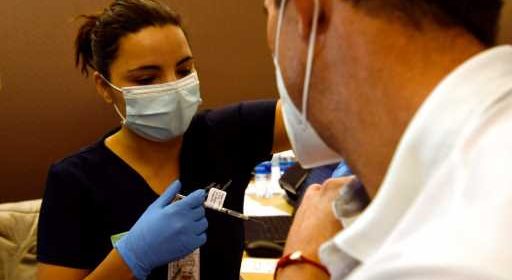 One of Colorado’s largest public health departments put the brakes on COVID-19 vaccinations for teachers and other school employees Tuesday, saying everyone 70 and older must be inoculated first under the state’s direction.

Tri-County Health Department, which serves Adams, Arapahoe and Douglas counties, is telling its providers — including hospitals, local health agencies and others able to offer the vaccine — to halt distribution to any essential workers under Phase 1B of the state’s rollout plan until older residents first have gained access, said Karen Miller, the agency’s immunization nurse manager.

That includes doses slated for at least two school systems that planned to inoculate teachers in the coming weeks. Nurses in Cherry Creek School District got their first shots on New Year’s Day through a partnership with Centura Health. The district planned to vaccinate school social workers, psychologists, special education paraprofessionals and cafeteria workers this week, and to begin scheduling teacher vaccinations next week.

Douglas County School District also planned to get the vaccine to educators and other student-facing staff members, such as security personnel and bus drivers, starting as early as this week or next week, according to a note sent to staff.

Miller said it’s more likely teachers in Tri-County’s three counties will be vaccinated starting in March. Confusion over the state’s guidance led to mistakes in how the doses should be allocated, she said.

“In hindsight, it’s always easier to say we wish we had the guidance when the plan came out so this kind of error doesn’t happen,” Miller said. “Everybody is so important for the functioning of our society and these are really hard decisions to make. These are directions and directives coming from our governor’s office and state health department.”

Gov. Jared Polis announced last week that about 1.19 million people would move up the line for COVID-19 vaccines and join first responders and health care workers with less contact with COVID-19 patients in Phase 1B. The groups added to the stage included anyone 70 or older and various essential workers, including those in schools and grocery stores.

But when the governor announced the change, few details were provided as to how the state would make sure the groups get their shots. There also wasn’t information on how individuals within the newly expanded Phase 1B would be prioritized.

Public health agencies have since been instructed to vaccinate the roughly 562,000 individuals who are 70 and older living in the Colorado before making doses available to the essential workers in Phase 1B.

The state health department said Monday evening that providers distributing the vaccine need to focus on the groups above what it calls “the dotted line” within Phase 1B on their distribution chart before moving to essential frontline workers, such as teachers, grocery employees and postal workers.

The groups that should receive first prioritization under Phase 1B are health care workers with less direct contact with COVID-19 patients, including those in dental and home health settings; first responders; and people 70 and older.

The state Department of Public Health and Environment said that school nurses are considered “health care providers and are in the early part of 1B.”

“Teachers and other non-clinical education staff are in the latter part of 1B (below the dotted line in the chart),” a health department spokesperson said in an email.

But providers have been told by the state health department that they should not begin distributing the vaccine to essential workers until everyone in the groups above them are vaccinated, otherwise it could “harm our chances of having access to vaccine if we do,” said Chana Goussetis, spokeswoman for Boulder County Public Health.

“That makes it very difficult for us,” she said of schools such as the Cherry Creek district getting vaccine doses early. “What we need the state to do is to hold everyone accountable to the prioritization.”

Miller said Tri-County is still completing Phase 1A of vaccine distribution, while also starting Phase 1B. There are about 120,000 residents who are 70 and older in the agency’s coverage area, people she hopes will have access to the vaccine in about two to three weeks.

“We anticipate to get through that group by the end of February,” and then school staff would be eligible to receive doses, she said. “That might be a very optimistic estimate, but that’s our hope as long as we have sufficient vaccines available in our state.”