Colorado near top in getting COVID-19 vaccine to people over 65, but middle of pack with overall population – The Denver Post 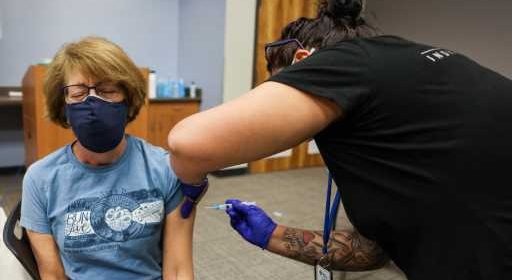 Three months into the COVID-19 vaccine rollout, it’s clear Colorado has immunized more seniors than most states — but it’s much harder to assess whether the state has succeeded in reaching others or using its shots efficiently.

Colorado ranks ninth in the nation in the percentage of people 65 or older who are fully vaccinated with either a single dose of the one-shot Johnson & Johnson vaccine, or both doses of Pfizer’s or Moderna’s two-shot regimen, according to data from the Centers for Disease Control and Prevention.

The state comes in 21st, however, when comparing the overall percentage of the population that’s been fully protected. About 45% of Coloradans 65 or older are fully vaccinated, compared to about 12.5% of the general population, according to the CDC’s data.

The gap could narrow as Colorado opens eligibility to a broader group of people with the move to Phase 1B.4 of its vaccine-distribution plan Friday.

Now, anyone 50 or older, or who has one chronic health condition that raises their risk of severe COVID-19, is eligible to get vaccinated in Colorado. So will essential workers who weren’t included in previous phases.

PHASE 1B.4: Who is eligible to get the COVID-19 vaccine beginning March 19?

As of Thursday, 1.3 million people in Colorado had been immunized with one dose, and 791,238 people have been fully immunized, according to state health data.

Vaccinating a higher percentage of older people than the general population reflects decisions by Colorado leaders on who to prioritize, and it doesn’t necessarily point to a problem with distributing shots, according to some experts.

After the state’s first phase, which began in December and included high-risk medical workers and residents of nursing homes and assisted living facilities, Colorado gradually opened eligibility to people who are at least 70, then 65, then 60, while also offering shots to limited groups of frontline workers.

Gov. Jared Polis repeatedly has said vaccinating those people most at-risk of becoming severely ill or dying from the coronavirus is the fastest way to fully reopen the economy without triggering another wave that could overwhelm hospitals.

“Our goal is to distribute vaccines efficiently and equitably to ensure we are reaching vulnerable and underserved populations across the state, including an early focus on our seniors 70 and older who represent 78% of COVID deaths in our state,” the Colorado Department of Public Health and Environment said in a statement.

RELATED: How to get a COVID-19 vaccine appointment in Colorado

It’s actually a good sign if more seniors are vaccinated than people in the general population, because it shows a state’s efforts to prioritize the highest-risk people are working, said Nilanjan Chatterjee, professor of biostatistics and epidemiology at Johns Hopkins Bloomberg School of Public Health.

Prioritizing seniors may slightly slow down the pace of distribution, compared to giving the vaccine to anyone who shows up, but it increases lives saved with a limited supply of doses, he said.

“It seems like Colorado is doing a better job prioritizing” than some states, Chatterjee said.

Only a few states have managed to vaccinate an above-average proportion of both their general population and their seniors.

One, Connecticut, had the 14th-largest population over 65 in the country as of 2018, meaning that vaccinating a large percentage of older people will also reach a bigger slice of the population. About 14% of Colorado’s population was over 65, making the state the fifth-youngest.

Percentage of general population that is fully vaccinated against COVID-19:

Three other states that are over-performing with both the general and senior populations have fewer than 1 million people: Alaska, North Dakota and South Dakota. Four of the 10 states that have vaccinated the largest percentage of their residents of all ages have populations of less than 1 million, and among those 10 best-performing states, only Connecticut has more than 3 million people.

It’s possible that the vaccine allocation went further with small-population states, meaning they didn’t have to manage scarcity in the same way as larger states, Chatterjee said. It’s fairer to compare states that have vaccinated a similar percentage of their overall populations, to see how well they reached those most in need, he said.

“That does not necessarily reflect that the prioritization has worked,” he said.

Some have pointed to the rate at which states can get vaccines into arms as a possible factor, but that doesn’t appear to be significant.

As of Monday, Colorado had administered 82.5% of the vaccines it had received, for a ranking of 25th. Alaska, which had reached a greater percentage of its people, had only administered about 71.4%, though.

A spokeswoman for the state health department said she couldn’t comment on why some states have administered more of their vaccines, without knowing how they distribute doses or report their data.

“We are administering close to our entire vaccine allocation each week and are prepared to administer more when the federal government increases supply,” she said.

The difference in rates of administering the COVID-19 vaccines may not be meaningful, given the delay in reporting data and that all states have consistently had more demand for shots than supply, said Dr. Georges Benjamin, executive director of the American Public Health Association.

In Colorado, vaccine providers have 72 hours to inform the state of the number of doses they’ve used, which can create a lag in tracking how quickly they’re administered.

“I think the overall issue has been shortages” of doses, Benjamin said.

Trying to figure out whether states’ policies are helping or hurting their vaccination efforts isn’t like comparing apples and oranges. It’s more like looking at the whole produce section, with some frozen or canned foods thrown in.

Only three states exactly followed the CDC’s guidance on who to vaccinate first, not moving groups up or down as they see fit — and those three include Hawaii, which is in the top 10 for vaccinating its whole population, and Alabama, which is in the bottom 10. In some states, who’s eligible varies from county to county.

Alaska and Mississippi already have opened up appointments to anyone over 16, and Utah will do the same on Wednesday. It doesn’t appear that they’re responding to any common trigger, since Alaska has vaccinated more of its population than any other state, while Utah and Mississippi are both in the bottom 10.

Almost all states prioritized nursing homes and hospitals, but then began taking different paths, whether in response to local needs or political pressure, Benjamin said. How many people from different groups have been vaccinated reflects states’ decisions, he said.

“States have, to some degree, gone off-script,” he said.

It’s clear that a few policy choices paid off, like West Virginia’s decision to rely on local pharmacies rather than chains, Benjamin said. In other cases, however, it’s harder to pinpoint who’s doing best, or why.

Colorado and most other states have said they would prioritize communities of color, who have suffered a disproportionate number of deaths from COVID-19.

Seven states aren’t releasing that data, though, and others have collected it from such a small percentage of people vaccinated that it isn’t reliable for comparisons.

Colorado leaders have acknowledged inequitable distribution. “It’s clearly unacceptable to have this kind of disparity here in Colorado,” Polis said during a news briefing in January.

As of Monday, 86% of the people vaccinated in Colorado for whom ethnicity was known were white, according to an analysis of state data by the Kaiser Family Foundation. That’s in line with white residents’ proportion of the overall population.

The national data that exists is enough to make it clear that people of color, low-income workers and those without the hardware or tech knowledge to sign up online are being left behind, Benjamin said.

Still, states need more robust information so they can see who isn’t getting the vaccine, and learn whether it’s because no one has been able to answer people’s questions, no appointments are available for people who work different shifts, or some other factor, he said.

“Disparities don’t just go away with more vaccines,” he said.

States need some freedom to make decisions reflecting local conditions, but states’ starkly different plans have frustrated people who are waiting for vaccines, but see pictures on social media of others like them getting the shot in other states, Benjamin said.

“It confuses people, as to why (certain) people are getting in this community and not others,” he said.