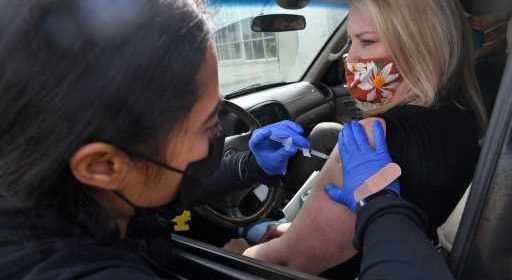 The Colorado Department of Public Health and Environment is investigating whether an unexpected number of reactions to Johnson & Johnson’s COVID-19 vaccine at one site on Wednesday reflected a problem with those doses or was due to simple chance.

The mass vaccination site at Dick’s Sporting Goods Park shut down early on Wednesday afternoon after 11 people experienced reactions such as dizziness and nausea. None of them became seriously ill, but it was an unusual number in less than four hours, since only 10 people had suffered adverse reactions at all previous mass-vaccination events in Colorado.

Dr. Shauna Gulley, chief clinical officer for Centura Health, which runs that site and two others, on Thursday said the unused doses from Dick’s Sporting Goods Park on Wednesday are being “sequestered” while the state investigates. About 640 more people were scheduled to be inoculated that afternoon before the closure.

All 11 people had a reaction within 15 minutes, so people who were vaccinated Wednesday and felt fine don’t need to monitor their health more closely than usual, she said.

“At this point, there’s no indication that there’s anything wrong with the vaccine itself,” she said. “This is a temporary pause of one type of vaccine.”

State health officials didn’t provide details about the investigation, but said they’re talking with the Food and Drug Administration and the Centers for Disease Control and Prevention.

“We currently believe that the dizziness and other symptoms experienced are consistent with what can be expected of any similar medical procedure. However, we are conducting an exhaustive review and are following up with patients from yesterday,” a statement from the department said.

Most of those who had reactions said they briefly felt light-headed or nauseous, Gulley said. Two people had low blood pressure and went to an emergency room as a precaution, but felt better after resting and went home without specific treatment, she said.

Mass vaccination sites in Colorado had given more than 6,000 Johnson & Johnson shots since Monday, including 1,700 at Dick’s Sporting Goods Park on Wednesday before the site shut down, Centura CEO Peter Banko said. No one reported any adverse reactions on Monday or Tuesday, he said.

The site at Dick’s Sporting Goods Park is normally closed Thursday through Saturday, and will give shots as usual starting Sunday, Banko said. The 640 people who didn’t get their shots Wednesday because the site shut down were rescheduled to Sunday, when the site will get a shipment of the Pfizer shot.

Sunday already was scheduled as a “Pfizer day” before Wednesday’s reactions, Gulley said.

Any adverse reactions are reported to a site’s medical director, Gulley said, but she wasn’t sure if a specific number triggered the decision to shut down.

“Any deviation from what we normally see gets our attention,” she said.