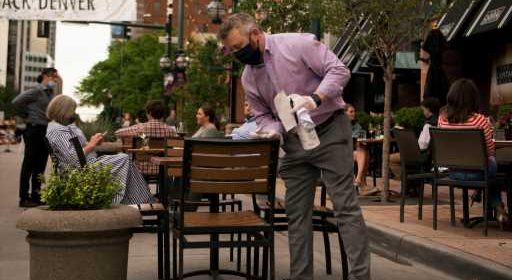 Colorado reported 160 cases of the new coronavirus on Tuesday — more than on the same day a week before, but still relatively low.

A week ago, the state had reported 137 new cases. The new numbers were still well below the first wave’s peak in late April, when one day brought in more than 900 cases.

The Colorado Hospital Association reported 141 people were hospitalized with COVID-19 as of Tuesday morning, showing that the number of people needing hospital care continues to flow slowly. No one was reported to have died of the virus Monday, though death reports can be delayed.

Since March, the state has confirmed 30,893 cases of COVID-19 and 1,455 deaths caused by the virus, according to the Colorado Department of Public Health and Environment. An additional 210 people died with the virus, but it wasn’t listed as their cause of death.

Last week, Colorado’s coronavirus cases increased for the first time since April. Ian Dickson, spokesman for the state health department, said it’s too early to know the increase was just a blip, but it’s a reminder to wear masks in public and stay 6 feet from others.

“We expect case numbers to fluctuate somewhat, so we need more time to determine whether or not this might be a trend,” he said.