Climate anxiety is real, and young people are feeling it

Although she has known about climate change for her "whole life", Manjot Kaur was researching online as a 13-year-old when she realised the extent to which it would affect her life to come.

But the scariest part wasn't the statistics about rising temperatures or pictures of devastated landscapes around the world she found online, Ms Kaur says: it was what she saw at home.

"People were going on with their lives as normal," the first year University of Sydney politics student recalls. "People were going to school and just living their lives. I was thinking, 'How could I just go to my class normally when my future is so uncertain and there's a massive crisis going on?'" 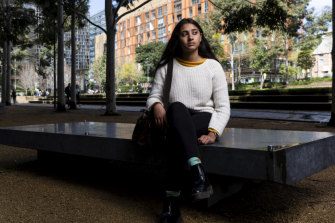 Manjot Kaur is one of many young people who think their quality of life is being compromised by climate change inaction.Credit:Dominic Lorrimer

Ms Kaur, 18, says she feels anxious about the future of the planet "to some extent" on a daily basis.

"I feel really powerless and helpless sometimes. Because the decisions have already been made, and not knowing what to do with that is quite scary."

According to new survey data from youth mental health organisation ReachOut, four in five Australian students report being somewhat or very anxious about climate change, with close to half of those experiencing these emotions on a weekly basis.

The survey data, which is not nationally representative, was collected from 1595 high school and university students aged 14-23.

Eighty-two per cent of respondents agreed with the statement "climate change is going to diminish my quality of life in the future", while 77 per cent said they did not believe their generation's concerns about climate change were being suitably addressed.

One in five students who took part in the ReachOut survey said they were planning to either not have children or have fewer children because of climate change, a position Ms Kaur identifies with.

"When I see my life plans, they really unclear because I don't know what climate change will mean or look like. But the idea of having a child and making them deal with the climate crisis in the future seems so unfair."

The impact of climate change on mental health is increasingly becoming a focus for psychological research.

The idea of having a child and making them deal with the climate crisis in the future seems so unfair.

A 2018 US study linked concern about the fate of the environment to depression and anxiety, finding women and people with low incomes were most likely to worry.

In 2017, the Australian Psychological Society released a guide for psychologists to help patients "come to terms and cope with the profound implications of climate change".

Approaches recommended by the guide to manage feelings about climate change include expressive coping (such as letting yourself cry), maintaining a healthy routine, and seeking social support from others.

Dr Timothy Sharp, psychologist at The Happiness Institute and adjunct professor at RMIT School of Health Sciences, has been observing anxiety about climate change "for quite some time now".

"My experience suggests that people of all ages are concerned, as they should be," he says, adding that, although be believes "anxiety is an appropriate and reasonable response" to climate change, it can and should be managed.

"We need to be careful that we don't mistake a normal response with a healthy one."

Dr Sharp says focusing on what you can do (express concern to politicians, be involved in a protest), as well as traditional low-level anxiety management techniques (meditation, exercise, talking to a supportive friend) are useful coping techniques.

For Ms Kaur, who helped to organise last year's Sydney School Strike 4 Climate and will be assisting at the march on Friday, coping mechanisms include talking to her friends, as well as taking breaks from social media.

However, she says taking part in the strike and other climate change protests has been the biggest help.

"It's helped me to feel like climate change is not completely out of my control."