Dr. Seema Doshi was shocked and terrified when she found a lump in her breast that was eventually confirmed to be cancerous.

“That rocked my world,” said Dr. Doshi, a dermatologist in private practice in the Boston suburb of Franklin who was 46 at the time of her diagnosis. “I thought, ‘That’s it. I will have to do chemotherapy.’”

Dr. Doshi was the beneficiary of a quiet revolution in breast cancer treatment, a slow chipping away at the number of people for whom chemotherapy is recommended. Chemotherapy for decades was considered “the rule, the dogma,” for treating breast cancer and other cancers, said Dr. Gabriel Hortobagyi, a breast cancer specialist at MD Anderson Cancer Center in Houston. But data from a variety of sources offers some confirmation of what many oncologists say anecdotally — the method is on the wane for many cancer patients.

Genetic tests can now reveal whether chemotherapy would be beneficial. For many there are better options with an ever-expanding array of drugs, including estrogen blockers and drugs that destroy cancers by attacking specific proteins on the surface of tumors. And there is a growing willingness among oncologists to scale back unhelpful treatments.

The result spares thousands each year from the dreaded chemotherapy treatment, with its accompanying hair loss, nausea, fatigue, and potential to cause permanent damage to the heart and to nerves in the hands and feet.

The diminution of chemotherapy treatment is happening for some other cancers, too, including lung cancer, the most common cause of cancer deaths in the United States, killing more than 69,000 Americans each year. (Breast cancer is second, killing 43,000.)

Still, the opportunity to avoid chemotherapy is not evenly distributed, and is often dependent on where the person is treated and by whom.

But for some patients who are lucky enough to visit certain cancer treatment centers, the course of therapy has changed. Now, even when chemotherapy is indicated, doctors often give fewer drugs for less time.

Dr. Robert Vonderheide, a lung cancer specialist at the University of Pennsylvania, remembers his early days on the job, about 20 years ago.

“Now we are walking in to see even patients with advanced lung cancer and telling them, ‘No chemo,’” Dr. Vonderheide said.

Breaking down the dogma. 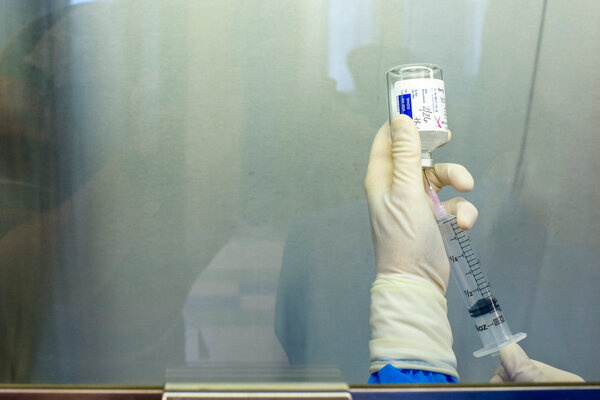 The breast cancer treatment guidelines issued by the National Cancer Institute 30 years ago were harsh: chemotherapy for about 95 percent of patients with breast cancer.

The change began 15 years ago, when the first targeted drug for breast cancer, Herceptin, was approved as an initial treatment for about 30 percent of patients who have a particular protein on their tumor surface. It was given with chemotherapy and reduced the chance of a recurrence by half and the risk of dying from breast cancer by a third, “almost regardless of how much and what type of chemotherapy was used,” Dr. Hortobagyi said.

In a few studies, Herceptin and another targeted drug were even given without chemotherapy, and provided substantial benefit, he added.

That, Dr. Hortobagyi said, “started to break the dogma” that chemotherapy was essential.

But changing cancer therapies was not easy.

“It is very scary,” to give fewer drugs, Dr. Hortobagyi said.

“It is so much easier to pile on treatment on top of treatment,” he continued, “with the promise that ‘if we add this it might improve your outcome.’”

But as years went by, more and more oncologists came around, encouraged by new research and new drugs.

The change in chemotherapy use is reflected in a variety of data collected over the years. A study of nearly 3,000 women treated from 2013 to 2015 found that in those years, chemotherapy use in early-stage breast cancer declined to 14 percent, from 26 percent. For those with evidence of cancer in their lymph nodes, chemotherapy was used in 64 percent of patients, down from 81 percent.

More recent data, compiled by Dr. Jeanne Mandelblatt, a professor of medicine and oncology at Georgetown, and her colleagues, but not yet published, included 572 women who were 60 or older and enrolled in a federal study at 13 medical centers. Overall, 35 percent of older women received chemotherapy in 2012. That number fell to 19 percent by the end of 2019.

Cheaper and faster genetic sequencing has played an important role in this change. The technology made it easier for doctors to test tumors to see if they would respond to targeted drugs. Genetic tests that looked at arrays of proteins on cancer cells accurately predicted who would benefit from chemotherapy and who would not.

There are now at least 14 new targeted breast cancer drugs on the market — three were approved just last year — with dozens more in clinical trials and hundreds in initial development.

Some patients have reaped benefits beyond avoiding chemotherapy. The median survival for women with metastatic breast cancer who are eligible for Herceptin went from 20 months in the early 1990s,to about 57 months now, with further improvements expected as new drugs become available. For women with tumors that are fed by estrogen, the median survival increased from about 24 months in the 1970s to almost 64 months today.

Now some are in remission 10 or even 15 years after their initial treatment, Dr. Hortobagyi said.

“At breast cancer meetings, a light bulb went off. ‘Hey, maybe we are curing these patients,’” Dr. Hortobagyi said.

‘Some cases keep me up at night.’

Dr. Doshi’s oncologist, Dr. Eric Winer of the Dana-Farber Cancer Institute, gave her good news: A genetic test of her tumor indicated she would not get any significant benefit from chemotherapy. Hormonal therapy to deprive her cancer of the estrogen that fed it would suffice.

But as much as Dr. Doshi dreaded chemotherapy, she worried about forgoing it. What if her cancer recurred? Would chemotherapy, awful as it is, improve her outcome?

She got a second opinion.

She had multiple conversations with Dr. Winer, who ended up discussing her case with four other specialists, all of whom recommended against chemotherapy.

Finally, Dr. Doshi said, “my husband said I should just pick a horse and run with it.”

Her struggles mirror what oncologists themselves go through. It can take courage to back off from chemotherapy.

One of the most difficult situations, Dr. Winer said, is when a patient has far more advanced disease than Dr. Doshi did — hers had spread to three lymph nodes but no further — and is not a candidate for one of the targeted treatments. If such a patient has already had several types of chemotherapy, more is unlikely to help. That means there is no treatment.

It falls to Dr. Winer to tell the patient the devastating news.

Dr. Susan Domchek, a breast cancer specialist at the University of Pennsylvania, can relate to those struggles.

“It is the nature of being an oncologist to be perpetually worried that you are either overtreating or undertreating a patient,” she said.

“Some cases keep me up at night,” she said, “specifically the cases where the risks and benefits of chemotherapy are close, yet the stakes still feel so high.”

When Dr. Roy Herbst of Yale started in oncology about 25 years ago, nearly every lung cancer patient with advanced disease got chemotherapy.

With chemotherapy, he said, “patients would be sure to have one thing: side effects.” Yet despite treatment, most tumors continued to grow and spread. Less than half his patients would be alive a year later. The five-year survival rate was just 5 to 10 percent.

Those dismal statistics barely budged until 2010, when targeted therapies began to emerge. There are now nine such drugs for lung cancer patients, three of which were approved since May of this year. About a quarter of lung cancer patients can be treated with these drugs alone, and more than half who began treatment with a targeted drug five years ago are still alive. The five-year survival rate for patients with advanced lung cancer is now approaching 30 percent.

But the drugs eventually stop working for most, said Dr. Bruce Johnson, a lung cancer specialist at Dana-Farber. At that point many start on chemotherapy, the only option left.

Another type of lung cancer treatment was developed about five years ago — immunotherapy, which uses drugs to help the immune system attack cancer. Two-thirds of patients from an unpublished study at Dana-Farber were not eligible for targeted therapies but half of them were eligible for immunotherapy alone, and others get it along with chemotherapy.

Immunotherapy is given for two years. With it, life expectancy has almost doubled, said Dr. Charu Aggarwal, a lung cancer specialist at the University of Pennsylvania.

Now, said Dr. David Jackman of Dana-Farber, chemotherapy as the sole initial treatment for lung cancer, is shrinking, at least at that cancer treatment center, which is at the forefront of research. When he examined data from his medical center he found that, since 2019, only about 12 percent of patients at Dana-Farber got chemotherapy alone, Dr. Jackman said. Another 21 percent had a targeted therapy as their initial treatment, and among the remaining patients, 85 percent received immunotherapy alone or with chemotherapy.

In contrast, in 2015, only 39 out of 239 patients received a targeted therapy as their initial treatment. The rest got chemotherapy.

Dr. Aggarwal said she was starting to witness something surprising — some who had received immunotherapy are still alive, doing well, and have no sign of cancer five years or more after their initial treatment.

She said: “I started out saying to patients, ‘I will treat you with palliative intent. This is not curative.’”

Now some of those same patients are sitting in her clinic wondering if their disease is gone for good.

Chong H. Hammond’s symptoms were ambiguous — a loss of appetite and her weight had dropped to 92 pounds.

“I did not want to look at myself in the mirror,” she said.

It took from October 2020 until this March before doctors figured it out. She had metastatic lung cancer.

Then Dr. Timothy Burns, a lung cancer specialist at the University of Pittsburgh, discovered that Mrs. Hammond, who is 71 and lives in Gibsonia, Pa., had a tumor with two unusual mutations.

Although a drug for patients with Mrs. Hammond’s mutations has not been tested, Dr. Burns is an investigator in a clinical trial involving patients like her.

He offered her the drug osimertinib, which is given as a pill. This allowed her to avoid chemotherapy.

Ten days later she began feeling better and started eating again. She had energy to take walks. She was no longer out of breath.

If Mrs. Hammond had gotten chemotherapy, her life expectancy would be a year or a little more, Dr. Burns said. Now, with the drug, it is 38.6 months.

Dr. Burns is amazed by how lung cancer treatment has changed.

“It’s been remarkable,” he said. “We still quote the one-year survival but now we are talking about survival for two, three, four or even five years. I even have patients on the first targeted drugs that are on them for six or even seven years.”

Mark Catlin, who is being treated at Dana-Farber is one of those patients.

On March 8, 2014, Mr. Catlin, who has never smoked, noticed a baseball-size lump under his arm. “The doctors told me to hope for anything but lung,” he said.

But lung it was. It had already spread under his arm and elsewhere.

Oncologists in Appleton, Wis., where he lives, wanted to start chemotherapy.

“I was not a fan,” Mr. Catlin said. His son, who lives in the Boston area, suggested he go to Dana-Farber.

There, he was told he could take a targeted therapy but that it would most likely stop working after a couple of years. He is 70 now, and still taking the therapy seven years later — two pills a day, with no side effects.

He rides a bike 15 to 25 miles every day or runs four to five miles.