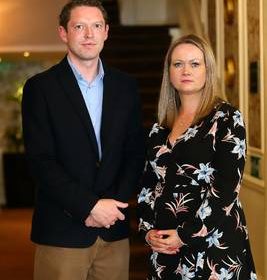 Cancer survivor Lorraine Walsh has resigned from the committee overseeing changes in CervicalCheck in a row over what she describes as inaccuracies in the latest report into the scandal.

Ms Walsh was one of 221 women whose smear tests were read incorrectly, and had been a patient representative on the committee.

She spoke out last night after the findings of a review of 1,034 women’s slides, some of whom are deceased, were published.

“I wish I could sit here tonight and tell the women of Ireland that I have confidence it that report.

“I don’t want to be sitting here tonight and telling the women of Ireland that I don’t have confidence in that report, but I absolutely don’t,” Ms Walsh told RTÉ.

“The revelations of the last number of months have forced me to examine my own conscience and when I got to a stage when I couldn’t sleep at night I had to resign and I had to leave the CervicalCheck Steering Committee as the patient representative on it.”

She spoke of concerns about inconsistencies and inaccuracies in the review, done by the Royal College of Obstetricians and Gynaecologists (RCOG) in the UK.

It emerged some women could have been either spared the disease or may have had it picked up at an early stage, increasing their chances of survival and reducing their risk of having radical treatment. Tragically, 12 of these women have died.

A quarter of those women whose cancer could have been prevented or caught, if their smear test was read correctly, had progressed to an advanced stage of the disease by the time it was diagnosed.

They were unaware their smear tests, carried out under the CervicalCheck screening programme, had wrongly given them the all-clear.

In 22 of these late-stage cancer cases, the disease could have been prevented.

For another 18 women, the cancer could have been either prevented or found earlier.

The RCOG review, commissioned by Health Minister Simon Harris in the wake of last year’s CervicalCheck scandal, re-examined the 1,659 slides from 1,038 women who developed cervical cancer.

It found 308 women got an incorrect result before they developed cancer.

Prof Henry Kitchener, lead assessor of the RCOG review, said while “recognising the serious consequences of screening failures for affected women, it is important to also recognise the inability of cervical screening to prevent all cases of cervical cancer”.

Prof Kitchener said the overall rate of discordance – where the original smear test result differed from the review – was similar to that found in a much larger review of cervical cancer cases in England.

The Irish cervical screening programme was “not an outlier”, he concluded.

The review was not able to say if the incorrect readings were due to negligence or the limitations of screening.

The review makes a number of recommendations, including the auditing of a woman’s smear test results once CervicalCheck has been informed of her cancer diagnosis.

This should be conducted in a “culture of candour with full disclosure of the audit findings” to the woman.

CervicalCheck should also publish an aggregate of these audit findings every five years.

Responding to the report, Health Minister Simon Harris said that the findings should provide reassurance and assist in restoring confidence in our programme. He said the recommendations had been accepted.

Stephen Teap, of the 221 support group, asked for Government support for those who received an incorrect result and wanted to have their test professionally assessed.