Brendan O'Connor: 'Half a stone lost and here are the lessons I've learnt' 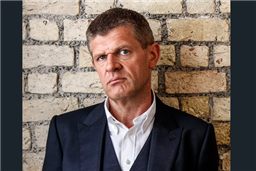 Previously ON MIDLIFE CRISIS: Having accepted he can’t control his weight on his own, Brendan has staged an intervention on himself and called in his own weight-loss guru, Ken Taylor. Before embarking on the Taylor Made Diet, however, Brendan goes on a Nicolas Cage in Leaving Las Vegas-style five-day food bender, during which he puts on an additional 4lbs.

I’ve lost weight, but we’ll come to that. Because this is not really about the weight loss. It’s more about what you learn in the process, and what might be useful for yourself in the future and for other people trying to lose weight.

The first few days of the diet were slow and grim and my mood was all over the place. I was surprised, because I hadn’t remembered it being this hard. I did an event with Michael Harding two days in and I think he was slightly concerned about me.

And then, after a few days it got a bit easier, and I realised that what had been going on for the first few days was withdrawal from sugar. The sugar is powerful stuff.

Everyone says the same thing: it’s easy to be good all day, but then evenings kick in and we plant ourselves on the sofa and graze. The first couple of days on the diet, I would eat my dinner, and the dinners Ken sends are really nice, but almost immediately I’d feel a gaping hole open up in me as I faced into an interminable evening with no food to break it up.

After a few days, though, I realised a few things: you are not actually hungry in the evening, you are slightly bored on some level, and you punctuate the evening with little treats.

My advice is, it’s very hard to just stop your evening eating habits, but you could try and replace them with a new habit. So instead of grazing on crap, maybe have an oatcake or two with some nice pesto or hummus. Don’t laugh, but you will actually come to savour them and realise you don’t need to eat crap. Mindlessly eating rubbish in the evening is a total waste if you’ve been fairly healthy all day.

Rewards: I realised after a day or two that one of the issues I was experiencing was that my whole rewards system had been upended. I used to be the kind of person (up to last week) who would reward myself for making it to lunchtime and eating a healthy lunch, with a nice cup of tea and some chocolate.

And on and on it would go. I wasn’t doing anything to deserve these rewards, but they were part of my day. I did some work; I deserved a sugar-lump.

Try to reward yourself in different ways. Take five minutes out and mindlessly google Airbnbs in New York or something. Just find another way to light up your dopamine.

Supermarkets: Supermarkets are a huge issue. Because Ken now delivers my food, I can largely stay out of them for now. But when I do go into them, my eyes are now opened, and I can see that we don’t stand a chance.

They don’t even confine junk to one part of the shop anymore. There is rubbish everywhere in many supermarkets, and more often than not it’s on some class of a deal.

And the junk is colourful and exciting and designed to trigger you. I saw the Cadbury logo on a keyring the other day and I suddenly needed chocolate. Marketing is a powerful tool, and it works on the subconscious, which is infinitely more powerful than the so-called willpower of your conscious mind.

Best to stay out of supermarkets when trying to lose weight. Just beg someone else to do your shopping if you have to, or maybe shop online. Indeed walking around town in general can be hazardous, with doughnut shops everywhere.

OK. That’s enough for this week. I promise I won’t bang on about this every week, but I might offer some good tips as I go on. Oh by the way, not to boast but in Week 1 the 4lbs I put on during the five-day bender disappeared almost immediately, and I lost 3lbs of proper weight too. So an encouraging start. Bear in mind, I’m not losing this weight just because I have changed my habits. I’m eating a portion-controlled low-GL diet. But I’m in the process, I feel, of rewiring my relationship with food and building better habits – and hopefully, that will stop me putting it back on too quickly.