Smokers could soon be forced to butt out along Southbank Promenade, as Melbourne City Council presses to extend a Bourke Street smoking ban across the CBD.

The Bourke Street Mall ban comes into effect on Friday and will cover the section between Elizabeth Street and Russell Place, including footpaths, tramways and roads. 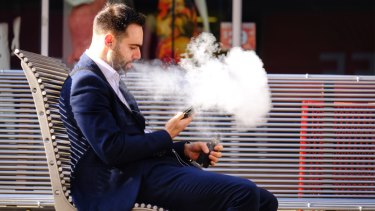 Dr White said it was “historically significant” for smoking to be banned in the mall, which has more than 60,000 visitors each day, likening it to to “iconic moment” when the MCG went smoke-free in 1999.

A council spokeswoman said smokers wouldn’t cop fines for lighting up in Bourke Street straight away.

She said the city would have officers in the area to educate people about the ban.

It has set aside $93,000 for the installation and maintenance of smoke-free signs and will also spend $50,000 on community engagement, communication and promotion.

A report to the council's Future Melbourne Committee showed 83 per cent of more than 3000 people surveyed supported the ban. This included more than 1000 people interviewed on Bourke Street.

Nearly 170 Bourke Street businesses surveyed returned an 83 per cent rate of support. While support was lower among smokers, 67 per cent of the 467 surveyed said they were either supportive or neutral.

The study, by market researcher Colmar Brunton, also found majority support on social media for a ban after monitoring thousands of comments and reactions to posts between May 15 and April 23.

People found throwing cigarette butts away anywhere in the city face heavier fines: $330 for an unlit butt and $660 for a lit butt.