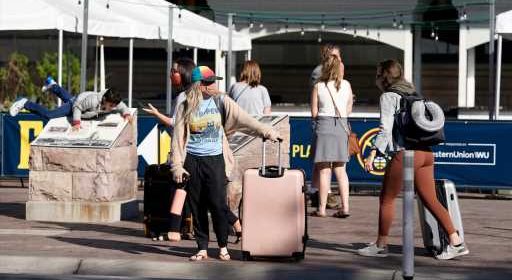 As more Coloradans remove their masks and begin socializing again, there is another aspect of pre-pandemic life that is remerging: common colds.

Health systems in the state are seeing an uptick patients with non-COVID respiratory viruses that mostly disappeared during the pandemic as people stayed home more often and wore masks. The state health department issued an advisory for doctors earlier this month, warning that respiratory syncytial virus — which can cause severe illness in children — is among the conditions reappearing.

“It’s been so interesting because for the last year with COVID, we basically didn’t see anything else and it was such a bizarre thing to see,” said Dr. Michelle Barron, senior director of infection prevention and control at UCHealth.

And the appearance this summer of respiratory syncytial virus, or RSV, is unusual. It normally circulates in fall and winter — but is increasing around the country right now. There have been 13 cases of RSV reported in Colorado so far, with 11 since May 5, said Dr. Christine Jelinek-Berents, medical director of pediatrics in Colorado for Kaiser Permanente.

By comparison, there were more than 900 RSV-related hospitalizations during the 2019-20 respiratory season, according to the Colorado Department of Public Health and Environment.

“We’re just starting to see it, partially, because different parts of the United States have different sorts of infection patterns,” Jelinek-Berents said, adding that the risk of it spreading further increases as people interact with others more.

Symptoms of RSV include runny nose, coughing, sneezing, fever and wheezing. In infants younger than 6 months, it can case irritability, decreased activity and appetite and apnea, according to the U.S. Centers for Disease Control and Prevention. RSV is the most common cause of bronchiolitis (the inflammation of airways in the lung) and pneumonia in children younger than 1 years old, according to the CDC.

It’s not just more cases of RSV that are circulating. Rhinovirus and non-COVID coronaviruses that cause common colds are also appearing in more patients. UCHealth started seeing one or two patients a week with colds in March, but it’s up to 5 to 6 patients a week, Barron said.

“(It’s) not unusual in general, but it’s unusual in the time of COVID,” she said.