Air ambulances were made for transport, but now offer ICU in the air 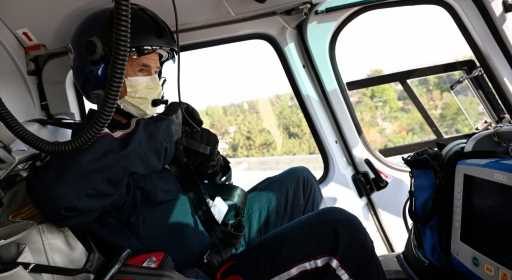 When air ambulances first took off in the 1980s, they were mostly about getting patients to a hospital as fast as possible. But now they can operate more like mobile intensive-care units, the crew of a Greeley-based medical helicopter said.

Traditionally, people with time-sensitive conditions were “treated with diesel,” meaning the plan was to get them to a hospital as quickly as possible, said Duane Rorie, a flight nurse with Med Evac, which has operated on the northern Front Range for 40 years. Helicopters were primarily a way to speed up that process, since they move faster than ground ambulances and aren’t encumbered by traffic, he said.

Now, air ambulances can do more complex procedures, including hooking up patients to machines that pump blood to give the heart a break, Rorie said. They also carry blood for transfusions and anti-venom for snake bites, which weren’t standard a few decades ago, he said.

Mark Turner, a flight paramedic, said a ground ambulance typically can offer the equivalent of a mobile emergency room, while a fully-equipped helicopter with a trained crew can do procedures normally reserved for intensive-care units, such as putting patients on ventilators.

A 2019 study found patients with injuries who were transported by air ambulance were less likely to die than those taken by ground ambulance, after adjusting for age and the severity of their condition. It didn’t examine patients with other types of emergencies, though.

Air ambulances have also gotten safer, now that the pilots regularly use night-vision goggles instead of trying to navigate by lights on the ground, Rorie said. Crashes involving helicopter ambulances have generally trended down from a high of 19 in 2003 to a low of four in 2018, the last year with data from the Federal Aviation Administration. Fatal helicopter ambulance crashes jumped around from as few as zero to as many as eight per year in the 20-year period the FAA reviewed.

A 2015 report from the National Highway Traffic Safety Administration found the country averages about 29 fatal crashes and 1,500 non-fatal collisions involving ground ambulances per year — a little less than one death per 100,000 trips. It’s difficult to directly compare accident and death rates with helicopter ambulances, since statistics about the number of flights lump them in with airplanes.

The Colorado Department of Public Health and Environment lists 21 air ambulance providers licensed to operate in the state. Some are based in neighboring states, but may pick up Colorado patients if they have the closest available crew.

In recent years, the Greeley crew has seen “fewer but sicker” patients, said Rorie, who has been a flight nurse since 1999. That’s consistent with nationwide trends. The Health Care Cost Institute found that the rate of helicopter ambulance trips compared to population dropped about 14% from 2008 to 2017.

In recent years, hospitals and first responders have only called for their most-severe cases, so the crew isn’t tied up with something a ground ambulance could handle, Rorie said.

“If we’re not bringing a higher level of care… why are you calling us?” he said. “Treat them with diesel.”

The cost of air ambulances also means that they’re not something patients choose lightly. Emergency transport and treatment by helicopter averaged more than $35,000 as of 2017 — though it varies quite a bit — and the price has likely risen since, according to the National Association of Insurance Commissioners.

The federal No Surprises Act, which took effect in January, is supposed to limit how much patients can be billed for emergency treatment, including transport by air ambulance. Some patients have been hit with six-figure bills after their insurance companies determined their flights weren’t emergencies, however. (Ground ambulances aren’t covered by the No Surprises Act, so patients could also face large bills from them.)

Sometimes, they do take less severely ill patients from rural areas where volunteers provide emergency medical services. In those cases, it’s not safe to leave a community without coverage while the ground ambulance crew drives a patient across the state, said chief flight nurse Jennifer Losh. During the worst points of the pandemic, they also sometimes transported patients across the state if there were no beds available nearby, she said.

The Greeley crew often goes to the Eastern Plains, or to areas without easy road access, like oil rigs and parts of Rocky Mountain National Park, Rorie said. It takes six or seven minutes to get to parts of the park that would require about a 45-minute drive, he said.

While most people think of car crashes and other severe accidents as the main reasons to call an air ambulance, strokes and heart attacks account for a larger share of calls, Turner said. They can administer drugs to dissolve blood clots in a stroke patient’s brain before getting to the hospital, reducing the odds of permanent damage, he said.

If there’s any question about whether it’s safe to fly, the air ambulance crew is only told the patient’s location, so that they won’t take risks for emotional reasons, Losh said. Once they’ve determined it’s safe to go, they get the information they need to plan for the flight, including a patient’s weight and condition, she said.

During the flight, they can notify the receiving hospital so that someone is ready to start treatment as soon as the patient’s unloaded, Rorie said. While the crew is based at North Colorado Medical Center, they’ll fly to other hospitals when needed. For example, pediatric patients with complex needs typically go to Children’s Hospital Colorado, and people who’ve had a body part amputated go to Denver Health if there’s any hope of reattaching it, he said.

About 70% of their calls are to take a severely ill or injured patient from a local hospital to one that can offer more specialized care, and the rest are “field” calls, which could be workplaces or hospitals that aren’t near health facilities, Losh said. A communications center in North Colorado Medical Center takes calls from other hospitals and local first responders, which they work with to smooth the transfer, she said.

“There’s nothing that we do that we could do alone,” she said.