A stolen childhood: the real number of young on waiting lists is now double the official figure 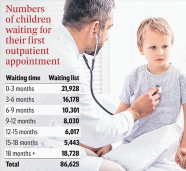 At least 86,625 children across the country are on hospital waiting lists to see a specialist – nearly double the official figure of almost 46,000.

The ‘hidden figures’ lift the veil on the extent of the waiting list scandal and uncover the gruelling delays faced by children who need a first-time appointment with a specialist .

Many are losing out on precious time, with a massive 18,728 on a waiting list for at least a year and a half.

The figures show how the crisis appears to have worsened since last spring when figures for 23 hospitals showed nearly 57,000 were waiting nationally, compared to 47,717 in official reports for the three children’s hospitals.

The true extent of the problem is much higher than the official figures released monthly.

That is because they only provide a specific breakdown for the three children’s hospitals in Dublin – at Crumlin, Temple Street and Tallaght.

They do not include hospitals across the country where children are counted with adults to give an overall total.

However, hidden figures for children’s waiting lists in 25 more hospitals expose how in total 86,625 youngsters are on some form of queue to be seen by a specialist.

The bigger picture emerged in response to a series of parliamentary questions from Sinn Féin’s spokesperson on health, Louise O’Reilly.

In Galway, there are 526 waiting for an appointment with a dermatologist and 301 children are on a waiting list to seen an orthopaedic surgeon in the same hospital.

In Cork, there are 695 children waiting for a first-time appointment to see a cardiologist while another 210 are on the list to be assessed by a plastic surgeon.

Claire Cahill of the Scoliosis Advocacy Network, representing children with the spinal condition, warned: “Unfortunately we have situations where children are spending their childhoods on waiting lists. This must end.”

She asked how the HSE can plan to roll out sustainable healthcare to children without the true numbers on waiting lists. “The Ombudsman for Children recommended in 2017 that there be child-specific waiting lists and target waiting times for outpatients clinics. This has not been implemented by the Government,” she added.

It is important to note that the real figure is higher that 86,000 because several hospitals, including St James’s Hospital, the Mater Hospital and St Vincent’s Hospital, do not provide breakdown figures on children’s waiting lists, she added.

He said the NTPF was working towards publishing the outpatients waiting list by adult and child categories in the coming months.

Under the National Service Plan 2019, the target for all hospital groups is for 80pc of people, including children, to wait fewer than 52 weeks for a first outpatient appointment.

He pointed to a number of initiatives, including the July opening of the new paediatric outpatient and urgent centre in Connolly Hospital, Dublin, which is linked to the new national children’s hospital.

“At the end of September 2019, there were 4,130 patients on the general paediatric outpatient waiting list, which is a 35pc reduction when compared to the same period last year.”

“In appointing these positions, the multidisciplinary teams are also reviewing their current work practices and identifying new ways of working to ensure appropriate management of waiting lists,” he added.