For millions of coronavirus survivors, it’s an increasingly important question: How common, how serious and how long-lasting are the physical and mental aftereffects of Covid-19?

A new study — believed to be the largest so far in which doctors evaluated patients six months after they became ill — suggests that many people will experience lingering problems like fatigue, insomnia, depression, anxiety or diminished lung function.

The study of 1,733 coronavirus patients who were discharged from a hospital in Wuhan, China, the original epicenter of the pandemic, found that more than three-quarters of them had at least one symptom six months later.

“This is one of the first publications that really describes in some level of detail longer-term outcomes among quite a large group of people,” said Dr. Michael Peluso, an infectious disease physician at the University of California San Francisco, who was not involved in the study. “It documents what people providing clinical care to Covid patients have known for a while now — that a large proportion of people do have long-term health consequences.”

The study, published Friday in the journal Lancet, involved in-person evaluations of people who had been admitted to Jin Yin-tan Hospital for a median of 14 days from Jan. 7 to May 29 last year. The patients, whose median age was 57, were given physical exams, lab tests and a standard measure of endurance and aerobic capacity called a six-minute walk test. They were also interviewed about their health. About 350 of them also underwent lung function tests, chest CT scans and ultrasounds.

“It shows that a substantial portion of people, far higher than you would expect in the general population, are exhibiting symptoms that are having an impact,” said Dr. Steven Deeks, a professor of medicine at the University of California, San Francisco, who is leading a study on long-term coronavirus symptoms that will follow patients for up to two years. “And importantly, there’s no specific pathway, there’s multiple different outcomes that occur: mental health stuff and pulmonary stuff and quality-of-life stuff. This provides pretty solid confirmation for what we’re all are seeing.”

The researchers did not assess patients’ cognitive or neurological function after six months, one of several reasons the study, though broad, cannot be considered a comprehensive picture of long-term Covid symptoms. It also did not report whether patients had anxiety or depression before contracting the disease, although it did report previous physical conditions like hypertension and diabetes.

The study involved patients who were sick enough to be hospitalized, but in most cases were not the most severely debilitated. About 75 percent required supplemental oxygen when they were hospitalized, but the vast majority did not need ventilators or even high-flow nasal oxygen, a noninvasive method used in treating respiratory failure. 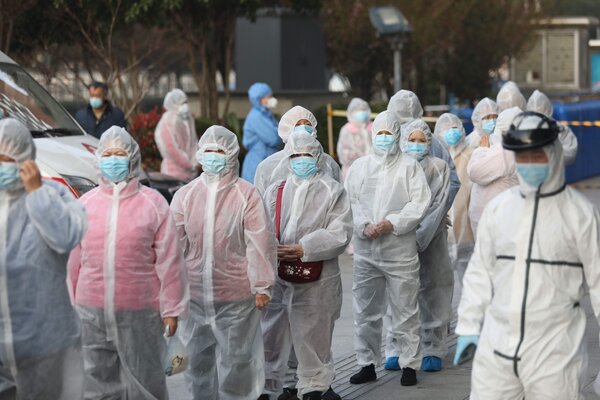 And the research did not include people who were too impaired to appear in person or to participate in the interviews six months later, such as people with dementia or psychosis or those who were immobile because of a stroke or blockages in their lungs. Nursing home residents were also excluded from the study, as were people who had been readmitted to the hospital in the months after they were discharged.

“Some of the sickest patients were excluded, so perhaps some of the outcomes that were reported would be worse if those patients were included,” said Dr. Lauren Ferrante, a pulmonary and critical care physician at Yale School of Medicine who was not involved in the study.

In general, patients in the study who needed more intensive oxygen support when they were hospitalized were worse off six months later than others who were not as sick. But even some who had not required any supplemental oxygen were struggling. For example, 24 percent of people who had not received additional oxygen in the hospital scored below normal in the distance they could walk during the six-minute test, while 29 percent of people who received intensive oxygen therapy scored that low.

And in the subset of people who completed additional lung function tests, people who had been sickest were more prone to having problems. But 22 percent of those who had been able to breathe on their own in the hospital had reduced flow of oxygen from their lungs to their bloodstream six months later.

“It means their lungs still haven’t fully recovered,” Dr. Ferrante said. “The fact that they’re seeing this problem in such a high proportion of people concerns me. It makes me worried that this problem might not go away.”

Most symptoms in the Wuhan report were slightly more common among women, with 81 percent reporting at least one health problem, compared with 73 percent of men.

Reports about other respiratory diseases, like the 2003 outbreak of SARS, another type of coronavirus, suggest that some Covid survivors may experience aftereffects for months or years. Most SARS patients recovered physically, but researchers found that many had “worrying levels of depression, anxiety, and post-traumatic symptoms” a year later.

In a commentary accompanying the Lancet study, researchers from Italy wrote that 38 percent of SARS survivors had diminished oxygen flow from their lungs 15 years later, adding that “evidence from previous coronavirus outbreaks suggests that some degree of lung damage could persist.”

While people who were hospitalized for Covid may experience more serious or longer-lasting physical issues, a growing body of evidence shows that even people who were never hospitalized can have residual symptoms. Many such patients are seeking care from the post-Covid clinics springing up in the United States.

One recent survey by a patient-led research team involved 3,762 participants, mostly women, from 56 countries — most of whom had not been hospitalized. Nearly two-thirds reported experiencing symptoms for at least six months, with most saying they had fatigue and that their symptoms became worse after physical or mental exertion, according to the report, which has not been peer-reviewed. More than half of those with symptoms said they experienced “cognitive dysfunction” involving brain fog or difficulty thinking or concentrating.

Dr. Peluso noted that since the Wuhan patients were hospitalized in the first half of 2020, most were not treated with some more recently recognized therapies like remdesivir or dexamethasone, so it’s unclear whether people receiving those treatments now would encounter the same degree of long-term complications.

Still, he and other doctors said the study’s portrait of lingering symptoms rings true. Dr. Ferrante said that at the post-Covid recovery program where she treats patients, “pretty much everybody that I’m seeing is reporting impairment in physical or cognitive function or both.”