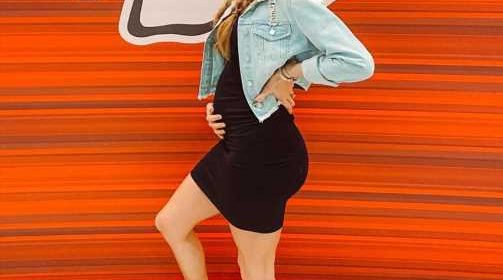 Brittany Matthews and fiancé Patrick Mahomes are nesting before the arrival of their baby girl!

On Thursday, the fitness trainer, 25, showed her followers a first look at her nearly-done nursery setup on her Instagram Story. Matthews and her NFL star fiancé Mahomes, 25, revealed last month that their baby on the way is a girl.

"The most beautiful handles for the most beautiful baby girl," the soon-to-be mom wrote while showing off a white dresser with sparkly handles on each drawer. The baby's room followed a comforting starry night theme with wall adornments in the shape of the moon and stars above the adorable crib.

One decorative wall piece reads "Good night sleep tight," while another says "Love you to the moon."

The room also has a little toy basketball hoop for their daughter to eventually grow into. Before he knew he was expecting a baby girl, Mahomes told KCSP 610 Sports Radio's The Drive in October that he wants his son or daughter to pursue whatever their heart tells them. Matthews announced that she is expecting back on Sept. 29 with an Instagram post featuring two photos with her fiancé, in which she held up a sonogram as Mahomes hugged her belly. "Mom & Dad, taking a small detour to the wedding❤️," she wrote at the time.

The athlete shared a close-up photo of the sonogram to his own Instagram feed, captioning the post with a red heart emoji.

The longtime couple — who began dating in their teens — got engaged earlier that month, when Mahomes popped the question following the Chiefs' Super Bowl ring ceremony and one day after Matthews' birthday

Who's Due Next? Krystal Nielson, Nicolette Robinson and More Celebs Who Are Expecting

The couple announced the sex of their baby last month via a video montage of their confetti-filled outdoor celebration.

Mahomes and Matthews wore all white in the clip as they waited for their adorable dogs to walk along a white carpet to reveal blue or pink paint on their paw prints — and it was pink!

"Baby Girl 💕💕," the mom-to-be captioned the post on Instagram. "P.s- Yes, my dogs walked down a run way with pink paws for the reveal 🤩😍" Mahomes shared the same video to his page, writing simply: "My ❤️"