Cameran Eubanks Says You Can't 'Have It All' as a Mom: We 'Have to Shatter the Myth' 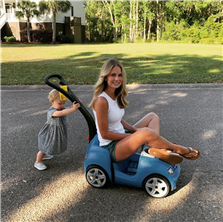 Cameran Eubanks is laying it all out when it comes to balancing work and motherhood.

In an exclusive conversation with PEOPLE, the Southern Charm star and mom to 18-month-old Palmer Corrine says she doesn’t like staying at home with her daughter full time and opines that despite what society may have you think, moms “really can’t” have it all unless they’re “extremely privileged.”

“I have gone back to work. I’m working probably 30 percent of what I was … as a mother, you have to shatter the myth that you can have it all. You really can’t,” says Eubanks, 35. “Unless you are extremely privileged and have the means to — which, I mean, could I afford a live-in nanny? I could. I don’t want to.”

“But you are always gonna have to sacrifice something,” she adds. “For me, it’s having to learn to sacrifice a lot of my independence and what I want to do. Ideally, I’d like to work and make money all day and then be with my child, but you can’t. You literally can’t have both.”

Cameran Eubanks Reveals Daughter Will Get No Presents from Santa This Year: “She Has Enough”

Eubanks refers to herself as “an awful multi-tasker” who “can really only focus on one thing at a time,” sharing that she has “horrible” attention deficit disorder that she is not medicated for, “by choice.”

“When I’m with Palmer she has all my attention,” the reality star tells PEOPLE. “With real estate, there’s no real set schedules, so a lot of times you might have paperwork that may be due and you just have to find time to do it. It’s very hard to do that when you have a toddler in your house.”

“It’ll be easier when she’s in school full time, but she’s not at the moment,” Eubanks says.

Eubanks thinks women are “conditioned by this image of what it means to be a new mother” because of what is being portrayed on social media and most television, but praises Netflix’s Workin’ Moms for being a “brilliant” representation of how the experience really is.

“It nails what you go through, what you feel, the truth of the matter,” she raves to PEOPLE. “A lot of women don’t want to admit how hard it is because if you admit how hard it is, then you seem like you don’t have your s— together. It can be embarrassing or you’re stigmatized as just not a good mom, but it’s hard. It’s the hardest thing I’ve ever done, for sure.”

But the difficult parts, she says, come with knowing she’s lucky to be a mom, and appreciating that fact through the tougher times.

“People will say you’re ungrateful. I have run into that. I’ve gotten some kickback,” Eubanks says. “I totally get it from women who have struggled to have children and would give anything to have a child, and they can’t. So that makes me kind of rein myself back in and say, ‘Shut the f— up, Cameran. You’ve got it good.’ “